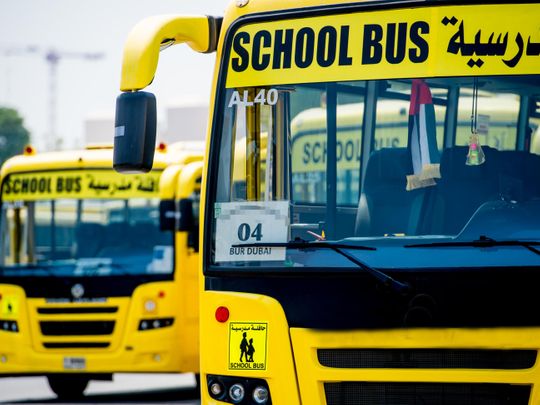 Dubai: Dubai Police are studying new ways and technology to protect children who might be forgotten inside school buses, an official said.

The study focuses on several solutions based on new technologies like face recognition cameras to identify students who enter the bus and alert the driver or supervisor if they don’t step out the bus on arrival at schools.

Lt Colonel Arif Ali Mohammad, deputy director of Crime Prevention Department at Dubai Police, said they were also working on a mechanism where the driver of the bus would be forced to walk to the end of the bus and press a button to open the door, so he can ensure no one remains on the seats.

“The study found many solutions to protect children from the risk of being forgotten inside the vehicle, or be subject to harassment or abuse. Dubai Police is also implementing the latest Artificial Intelligence technology to prevent crimes concerning children,” Lt Col Mohammad said in a panel discussion at the Intersec security and safety expo in Dubai.

Dubai Police said in June 2019, a six-year-old boy died after he was forgotten inside a bus for several hours. The Asian boy remained inside the bus belonging to the Centre for Memorising Quran in the Al Quoz area for nine hours.

Dubai Police said the boy was alone inside the bus though all other children had alighted after the driver closed the door without checking if there was anyone inside.

“The study suggested that drivers and supervisors be trained on how to treat pupils and drive safely. Drivers and supervisors are responsible for children’s safety while they are on the bus. The incident last year happened because there was no supervisor in the bus and the driver didn’t check the bus before closing it,” Lt Col Mohammad added.

He said the solutions will be discussed with Roads and Transport Authority, Emirates Transport, schools and other departments.

The post New technology for Dubai school buses under study appeared first on The Wealth Land.