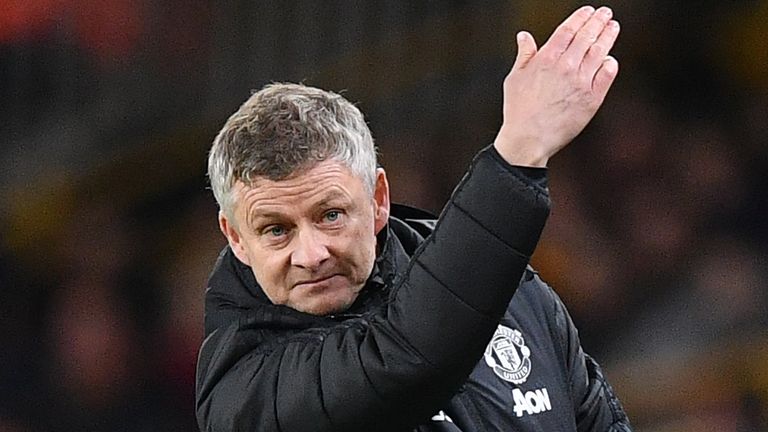 Ole Gunnar Solskjaer dismissed fears of fatigue at Manchester United after they were forced to settle for an FA Cup third-round replay at Wolves.

The visitors failed to register a shot on target at Molineux, drawing a blank for the third time in their last five matches in Saturday’s stalemate.

But Solskjaer, whose side play the first leg of their Carabao Cup semi-final against Manchester City at Old Trafford on Tuesday live on (Sky Sports) , insisted another match does not faze him.

“We do have enough games and we will probably play Wolves in the Europa League soon, but that’s what we’re in it for, “the United boss said. “I would rather have a replay than go out.

” When I played we drew Burton away and they got us at Old Trafford, we beat them 5-0 But it’s great days out for them as well.

“It’s the schedule we are in and have to accept it. I am full of praise for the players and how they cope with it. “

0 – Manchester United failed to direct a single shot on target in a domestic league or cup game for the first time since January vs Southampton in the Premier League. Barren. # FACup

“You can say Marcus’ shot is not on target but it’s going in if Conor Coady’s heel isn’t there, “he added. “We had chances.

” In the first half we had the possession, in the second half they had possession and a couple of chances. Both teams could have won it. “

United’s best chance at Molineux fell to Marcus Rashford, but a stunning block from Conor Coady diverted it onto the crossbar

Matt Doherty was denied by a superb Sergio Romero save and had a goal disallowed for handball in the second half. Brandon Williams also had a penalty claim turned down in the first half for United.

Raul Jimenez struck the woodwork late on for the hosts and, facing another game, boss Nuno Espirito Santo would prefer a shoot-out to s ettle the game on the night.

“I would like to go straight to penalties, but we did enough,” the Wolves boss said. “The second half was very good.

” We have to go and compete at Old Trafford, but if you ask me what my preference is, straight to penalties. The game would become more emotional because both teams would go for it.

“It was a good performance, we controlled the game in the second half. Now we have to play again. “