Activists of the All Assam Students’ Union ( AASU) and Asom Jatiyatabadi Yuva Chhatra Parishad (AJYCP) waved black flags at Mr Sonowal at a number of locations while he was traveling from Guwahati to the ashram of religious preacher Krishnaguru in Barpeta district.

The protesters shouted slogans against the citizenship law and the government as the Chief Minister’s convoy pass through.

In one of the videos, policemen are seen chasing the unarmed protesters away from the highway as they raised slogans when Mr Sonowal’s convoy passed. The police is also seen chasing the protesters inside a by-lane and catching hold of one of them. The man was seen being taken away in a police van.

Another unarmed protester is seen being detained by the police as one of the cops brings him to the highway and canes him. Other policemen then join their colleague.

A video shows the police dragging a protester even as other protesters gather around cops. The policeman who was seen hitting the protester was then seen running away towards a bus.

The police played down the video, saying a cop was seen hitting a protester when he resisted getting into the car . “There was only once in the video that a policemen had hit an agitator with cane once or twice. There was pushing between the police and the agitator since he was detained. He was resisting to get into the car. There was no baton-charge on anyone else, “Nalbari police chief Amanjeet Kaur told NDTV.

The top officer said large gatherings were banned in the area and that the agitators had not taken prior permission from the police for the protests . “The supporters of AASU and AJYCP were coming very close to the highway. They were actually on the highway. It would have been a major breach of the Chief Minister’s security. The police chased the crowd since there was Section (ban on large gatherings) imposed, “she said.

Similar videos of crackdown by the police have emerged from Uttar Pradesh as well where violence protests over the citizenship law have left 21 people dead.

The Citizenship (Amendment) Act for the first time makes religion the test of citizenship in India. The government says it will help minorities from three Muslim-dominated countries to get citizenship if they fled to India because of religious persecution. Critics say it is designed to discriminate against Muslims and violates the secular principles of the constitution. 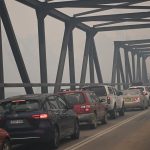