PMC Bank case petition has been filed by Bejon Misra.

A plea seeking 100 per cent insurance protection for the deposits of over 15 lakh customers of crisis-hitPunjab and Maharashtra Co-operative(PMC) Bank will be heard by the Supreme Court on Thursday.

Angry customers of the troubled bank today gathered outside a court in Mumbai as it sent three former executives of the bank and its borrower.

The father-son promoters of crisis-hit real estate firm Housing Development and Infrastructure Limited (HDIL) openly-maintained a flamboyant lifestyle as they moved around with armed guards.

Accused of not repaying loans up to Rs 6, 500 crore to Punjab and Maharashtra Cooperative (PMC) Bank, Rakesh Kumar Wadhawan and his son Sarang Wadhawan will stay in a police lockup till October 9.

The two were often seen in parties hosted by Mumbai’s who’s who, sources said.

The PMC bank case petitioner Bejon Misra’s lawyer Shashikant Dev told NDTV, “We have requested the Supreme Court that depositors must be given the assurance that their money is safe and all 15 lakh account holders must be given immediate protection. “

” Rs 1 lakh insurance cover is not enough and must be increased, “the petitioner added.

Maharashtra Chief Minister Devendra Fadnavis, campaigning for the October 21 state election, has assured that he will take up the PMC Bank crisis with the center. “We will request the center to help depositors get their money back. I will personally be following up on this,” he said on Tusesday.

“We will do everything possible in our capacity to help the depositors of PMC Bank, “Mr Fadnavis asserted.

The PMC case has sparked renewed concerns about the health of India’s troubled banking sector , which has been rocked by a multi-billion dollar fraud at a state-run lender, the collapse of a major infrastructure lender, bad loans at state-run banks and a liquidity squeeze that has hit shadow lenders. 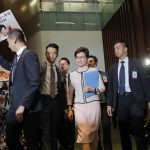