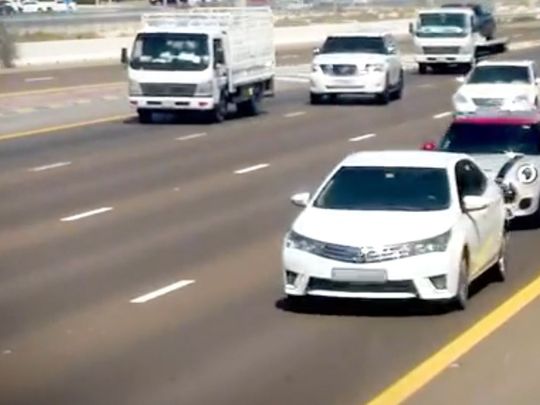 Abu Dhabi: Abu Dhabi Police are advising motorists to abide by a two-second rule to avoid a raft of new warnings and fines for tailgating, which come into effect on January 15.

Announced Tuesday, it was said that new smart sensors would automatically send warning text messages to motorists who failed to leave enough room between them and the car in front. Repeat offenders would also be fined Dh400 and given four black points on their licence.

However, at the time of the announcement no clarification was forthcoming as to what time or distance qualifies as tailgating until now.

“Drivers should ideally stay at least two seconds behind a vehicle that is directly in front of his/her vehicle. This is very useful and can be applied to any speed,” he said.

Along with the two second rule, the Abu Dhabi Department of Municipalities and Transport has also beening marking two major roads with dots marked out at two car lengths apart to alert motorists of the importance of maintaining a safe distance from the car in front.

“The safe distance dots along with relevant signs will give motorists clear direction as to what the safe following distance should be,” added Al Eisai, who said the two roads where this would be introduced was on the Abu Dhabi-Dubai and Abu Dhabi-Al Ain highways.

Tailgating was one of the major causes of road accidents in Abu Dhabi over the past two years, according to Al Eisai.

Abu Dhabi Police is carrying out a traffic awareness and control campaign to reduce such negative behaviour, as section 52 of the traffic control rules and procedures No.178 for 2017 will be applied to drivers who don’t leave enough space between them and the car in front.

The first violation will be a warning and any further violations will be fined, he said.

Each violation will have a photo along with the exact time of the violation, should any motorists feel the need to contest their fine, he added.