THERE is another scandal threatening to engulf Prince Andrew – and it centers not on sex, but money.

On paper,Andrewshould not be that well off, royally speaking. He receives a tax-free income of £ 249, 000 a year fromthe Queen, which is topped up with £ 20, 000 from his naval pension.

That’s a total of nearly £ 270, 000 a year. Yet he somehow lives a billionaire lifestyle, jetting around the world, lounging on superyachts or relaxing on the beach at St Tropez.

On top of that, he continues to supportSarah Ferguson– to whom he is never quite married or divorced – in her lifestyle.

But even with these expenses he has managed to buy a £ 13 million ski chalet in the sought-after Swiss resort of Verbier, with a staff of six, to give daughtersBeatriceandEugeniea permanent base in this billionaires’ playground.

Remarkably, when he bought the magnificent Swiss chalet in 2014, the prince also splashed out £ 7.5million to refurbish Royal Lodge, his 30 – room home in Windsor Great Park.

Nor does he skimp on his personal possessions. He was snapped in 2015 wearing the latest £ 12, 000, 18 – caratApple watchand he drives a (Bentley) with the personal number plate DOY.

Yet there is no steady income stream to explain this lavish lifestyle.

One acquaintance said: “I would compare Andrew to a hot air balloon. He seems to float serenely around in very rarefied circles without any visible means of support. ”

Clearly,Andrewbenefits from others’ generosity , but they generally want something in return, even if it is only the kudos of being with a royal.

A clue also might be his activities, on the British public’s behalf as a sort of trade envoy.

Andrew’s schedule has been top-heavy with visits to appalling autocrats and dodgy dictators.

By contrast, you would have to look very hard to find any so-called trade visits to Western democracies. Instead, he spent a large amount of time in the Middle East.

Between November 2001 and May 2008 he visited the United Arab Emirates on nine occasions, Qatar five times and Kuwait, Bahrain and Egypt four times each.

Naturally, the cost of his travel, usually by private jet, was picked up by the British taxpayer.

He was supposed to be drumming up business for Britain, but when asked by the then Trade Minister, Ian Pearson, in 2005 to list the contractsAndrewhad won for us, he couldn’t name one.

The Duke of Yorkwas forced to quit his trade envoy role in 2011 after the picture of him andJeffrey Epsteinwalking through Central Park emerged – when he claimed to be telling the convicted paedophile their friendship was over.

But he simply turned to international dealings under a new venture called Pitch @ Palace. Today The Sun revealed thatCity firm KPMG had withdrawn its backingfor the Dragons’-Den style initiative for young entrepreneurs.

When I checked, the most recent Pitch @ Palace event had been a seminar atBuckingham Palacefor, yes, Bahrain.

Soon afterwards, in March 2019, he visited the country, again, on an official visit paid for by us, and was joined by wife Sarah and daughter Beatrice as guests of the Crown Prince at the Bahrain Grand Prix.

On a trip to Qatar, he disappeared for four days. It turned out he had stopped off in Azerbaijan, one of the most corrupt countries in the world, where political opponents are tortured and elections are rigged. This did not seem to deter Andrew. He had been there eight times in the previous six years.

Two of those visits were described in the WikiLeaks cables as “very private”. Yet on at least one occasion, in 2009, he flew there and back using a private jet, leaving the taxpayer to foot the £ 60, 000 bill.

Another favorite destination was Kazakhstan, where Andrew had a series of “private” meetings lasting hours with the Kazakh tycoon Kenges Rakishev, said to be worth £ 2billion.

At the time he was meeting Andrew, Mr Rakishev happened to be d eveloping a £ 2.5billion petrochemical plant in Kazakhstan.

One of the billionaire’s senior employees, Artur Krivov, said: “Mr Rakishev does not meet with anyone more than once if he does not need anything.”

What did he need from Andrew?

Also in Kazakhstan, the Duke of York formed a bond with the dictator Nursultan Nazarbayev and his son-in-law Timur Kulibayev.

That contact would come in handy whenAndrewtried to offload Sunninghill Park, the sprawling house near Ascot, Berks, which he had orginially been given by the Queen as a wedding gift in 1986.

Nobody wanted to spend £ 12 million on this ugly eyesore that had been on the market for years. Yet in 2007 Timur Kulibayev bought it for a whopping £ 15 million – £ 3million over the asking price – then left it to rot before demolishing it.

In 2015, the prince arranged for President Nazarbayev to have lunch with the Queen at Buckingham Palace, a rare honor these days given her age. I am sure the dictator was very grateful to Andrew.

That sum was one per cent of a £ 385 million deal the Prince helped broker, using his contacts with Rakishev, on behalf of a Greek sewerage company and Swiss finance house who were bidding for infrastructure contracts in Kazakhstan.

Nice work if you can get it.

Andrew denied any involvement in this deal until presented with a copy of emails proving he was indeed at the heart of it, at which point he unsuccessfully resorted to a law firm to try to stop publication of the facts.

In the end, the deal fell apart when the Kazakh police opened fire with live ammunition on a group of striking workers and investors in the project took fright.

Andrewacts legally at all times, but the company he keeps, as with disgraced billionaireEpstein, does leave him open to attack. Andrew also met Colonel Gaddafi, the former Libyan dictator, more than once and, separately, his son Saif Al-Islam Gaddafi several times.

It was public knowledge that Andrew made a five-day trip to Libya in November 2007. When questioned by the Mail on Sunday, Buckingham Palace implied this was his only trip to the country and that he had not met Gaddafi while there.

Eventually, they conceded that he had indeed met the Libyan dictator on a visit in 2008 and had also undertaken two other private visits.

In 2010, Andrew hosted a lunch at Buckingham Palace for Sakher El Materi, son-in-law of the Tunisian despot Ben Ali, described by Britain’s former ambassador Stephen Day as a, “crook. . . the worst of them all ”.

Day wrote to the thenFo reign Secretary William Haguedemanding Andrew should be relieved of his post and, “an entirely new role should be found for him as soon as possible”.

As well as business trips, Andrew loves a free holiday. He was allegedly a guest of Epstein’s when he was snapped on a superyacht, surrounded by topless women, in Phuket, Thailand, in 2001.

Then, in 2011, he was spotted snogging a young beauty in the sea while on a three-day break in Corsica. He was the guest of Saudi billionaire Mohammed Abdul Latif Jameel on a jaunt, worth an estimated £ 85, 000.

The Prince also shared a holiday in Tunisia with Tarek Kaituni, a convicted Libyan gunrunner who gave Andrew a gift of an £ 18, 000 diamond necklace for Beatrice.

Any gift given to an MP or a councillor has to be registered and cannot be kept unless it is of minimal value. The royals say they don’t need to register “private” gifts. Has Andrew accepted private gifts?

We know thatSarah Ferguson, at least, may have profited from his friendship with Epstein. She received £ 15, 000 from him towards paying off her mountain of debts, days after Andrew had been photographed with him in Central Park. In the storm that followed this saga becoming public, Sarah admitted to a “gigantic error” and vowed to repay the money.

When asked in 2015 if she had done so, her spokesman replied: “No comment.”

The Prince needs to be totally transparent over his lifestyle.

He has become a huge stain on theRoyal Familyand a national embarrassment to this country.

The Sun is offering a £ 10, 000 reward for information on Ghislaine Maxwell

Unlike MPs, he cannot be voted out. But the time has come for him to be relieved of all royal duties, and to become a private citizen.

We have all had enough of the Grand Old Duke Of Sleaze. 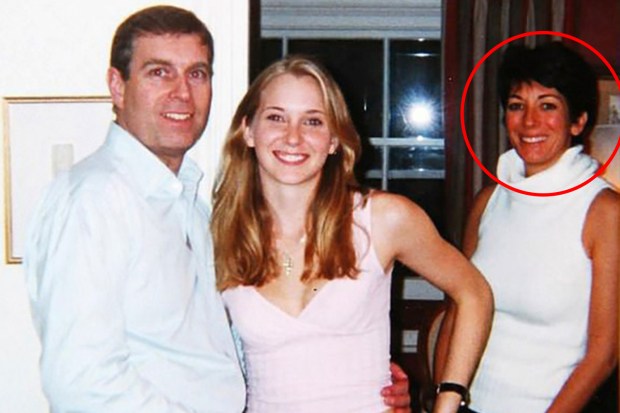 SHE is at the center of the Andrew “sex abuse” storm.

But socialite Ghislaine Maxwell, accused of finding victims for the Prince’s paedo pal Jeffrey Epstein, is nowhere to be seen.

The daughter of the late newspaper tycoon Robert Maxwell is said to have been in various cities in the US and Europe.

To be eligible, you must provide information which directly results in The Sun successfully making contact with her in person.