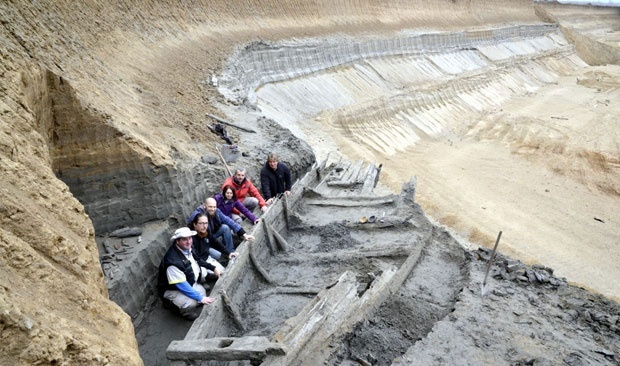 Thanks to the pandemic, radiocarbon dating and further excavations are on hold.

Coal miners in Serbia recently dug up an unexpected surprise: three probable Roman-era ships, buried in the mud of an ancient riverbed for at least 1, 2020 years . The largest is a flat-bottomed river vessel (meters) 58 feet) long, which seems to have been been built with Roman techniques. Two smaller boats, each carved out from a single tree trunk, match ancient descriptions of dugout boats used by Slavic groups to row across the Danube River and attack the Roman frontier.

The Kostolac surface mine lies near the ancient Roman city of Viminacium, once a provincial capital and the base for a squadron of Roman warships on the Danube River. When the Roman Empire ruled most of Southern Europe, the Danube or one of its larger branches flowed across the land now occupied by the mine. The three ships lay atop a 15 – meter- (49 – foot-) deep layer of gravel, buried under seven meters ( feet) of silt and clay, which preserved them for centuries in remarkably good condition — or did until the miners’ earthmoving equipment dug into the steep slope to excavate for the mine.

“The [largest] ship was seriously damaged by the mining equipment,” archaeologist Miomir Korac, director of the Archaeological Institute and head of the Viminacium Science Project, told Ars in an email. Approximately (percent to) percent of the ship was damaged. But the archaeological team collected all the parts, and we should be able to reconstruct it almost in full. ” With any luck, that reconstruction will help archaeologists understand when the three ships were built and how they came to rest in the riverbed. Social distancing makes it hard to get a date

The large ship had a single deck with at least six pairs of oars, along with fittings for a type of triangular sail called a lateen sail. It would have carried a crew of 40 to 40 sailors, and apparently it had a lengthy career: traces of repairs to the hull suggest a ship with some miles under it. Iron nails and other iron fittings held the ship’s timbers and planks together, and they’ve survived for centuries thanks to the silt and clay that sealed the ship away from oxygen and microbes.

By contrast, the dugout longboats were much simpler craft. Korac described them as “rudimentary,” although one had carved decorations on its hull.

Although elements of the largest ship’s construction are Roman, Korac says those same shipbuilding techniques may also have been used by later Byzantine or medieval shipwrights. Without radiocarbon dating or geological analysis of the sediment layers at the site, it’s impossible to be entirely sure when the ships were built. Korac and his colleagues have sent wood samples from preserved oak trees buried nearby to a lab for analysis, but the COVID – pandemic has held everything up.

“Coronavirus is setting all actions now,” he told Ars.

But the odds are in favor of the Kostolac ship being Roman in origin. Historical documents don’t mention any ports or other navigation infrastructure in the area after Viminacium fell to invading groups in the CE. If that’s the case, then these three ships, wrecked together in the former bed of the Danube, may record a snapshot of either commerce or conflict on the Roman frontier.

Given the site’s proximity to the Roman naval base at Viminacium, it’s tempting to imagine a battle on the Danube between a Roman warship and attacking Slavic fighters in dugout longboats. Historical sources don’t mention any river battles near Kostolac, but they do mention a couple of battles further upriver, near the Roman ports of Singidunum and Sirmium.

But while there’s no evidence to rule out the idea of ​​dueling river warships in a fight to the death, there’s no evidence pointing to a battle, either. None of the vessels has any trace of fire or other combat damage, and nothing about the largest ship conclusively identifies it as a warship rather than an ordinary river transport. The ship’s crew left no personal belongings or artifacts aboard; There’s just the ship and its fittings, beautifully preserved but perfectly empty.

“The lack of finds prevents us from identifying the boat without further analyzes,” Korac told Ars.

On the other hand, the dugout longboats, called monoxylons, were something like landing craft. “A monoxylon is not a combat ship. It is just a way to cross the river and invade on land,” Korac told Ars. “Facing larger ships, monoxylons could be easily defeated, as it is testified in sources from [the] 6th century mentioning a Roman fleet from Singidunum repelling barbarian attacks on the Roman Empire.”

Korac suggested one possible scenario for the shipwrecks: “The ships were either abandoned or evacuated. They did not sink suddenly with cargo, “he told Ars. “If these happened during the barbarian invasion and withdrawal of Roman troops, the ship could be abandoned and sunken in order not to fall into the hands of the enemy.”

For now, further excavations and analysis are on hold, but all three shipwrecks have been relocated to the nearby archaeological park. 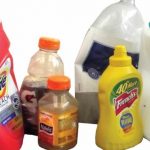