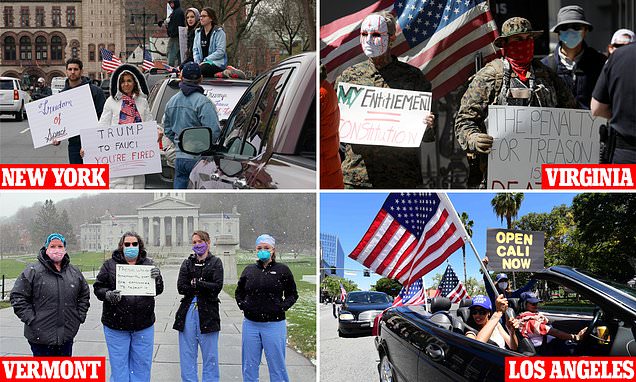 In Virginia’s capital demonstrators gathered in cars for a drive-in protest while some more raucous rebels gathered on foot outside Capitol Square in Richmond to decry Governor Ralph Northam’s stay-at-home orders, which are slated to last through June 15.

In Vermont demonstrators braved the snow outside the Statehouse in Montpelier to rally for the end of the state lockdown. A group of nurses counter-protested against their demands, wearing their scrubs and facemasks.

In Albany, New York protesters gathered in front of the State Capitol building on Wednesday afternoon in a protest organized by the group ReOpen New York State.

Protesters have descended upon Virginia’s capital in defiance of strict lockdown orders to demand Governor Ralph Northam reopen the economy as legislators gathered to discuss how to handle the coronavirus crisis. Participants of Wednesday’s gridlock rally pictured above holding signs that say ‘All businesses are essential’ and ‘the penalty for treason is death’

Vermont: Protesters braved the Cold and snow in Montpelier on Wednesday to protest the state’s lockdown order

People were seen holding signs that said ‘Tell Old Cuomo Let My People Go’ and ‘My Small Business Is Essential ‘.

Lines of cars honked as a large group of dissidents banded together waving Trump flags, American flags as they ignored social distancing measures.

People from across the state attended the event, including Westchester and Long Island, most of them noticeably not wearing masks as the governor mandated.

‘If we don’t come together now to get this economy back open and running and healthy, we could very well not have an economy at all when we decide to do it, ‘David Britt, organizer of the Reopen Virginia rally, said (NBC 21 )

The protesters gathered an hour before Virginia lawmakers flocked to the capitol for one-day legislative session to review amendments from Governor Northam on 1, 291 pieces of legislation including budget amendments.

It was a surprise session in light of the pandemic and the first s uch meeting in the state’s 600 – year history.

House Delegates met under a canopy outside the Capitol while the Senate met at a giant event space at the Virginia Science Museum 2.5 miles away – and all will stand 15 feet apart at individual workstations to speak and vote. The lawmakers were asked to wear masks and avoid wearing germ-carrying ties.

Virginia: People were seen dressed as traffic cones and clutching signs that said: ‘Liberate Virginia from Ralph the Runaway Tyrant’

Virginia: In the drive-in protests locals protested while practicing social distancing from the cars, where they waved American flags

Counter protesters in Virginia: Dr. Erich Bruhn and his wife, former nurse Kristin Bruhn, defended the lockdown and protested against Wednesday’s demonstration dressed in their white coats and masks with signs that said ‘You have no right to put us all at risk. Go home! ‘

Virginia: Protesters honked in their cars, waved flags, and carried signs as they participated in Wednesday’s drive-in protest

The last time the Virginia’s General Assembly was together they vote on a budget on March .

On Wednesday, they voted on a plan by Gov. Northam to suspend all new spending in the state’s new two-year budget. His administration expects at least a $ 1billion shortfall per year, according to NPR .

Capitol Square itself was closed to the public due to the meeting and protesters were seen rallying outside its gates.

Capitol and Virginia State Police were on site to monitor the protesters and urged them to maintain social distancing at Wednesday’s gathering. No arrests so far have been made.

Protesters are demanding that the lockdown order be lifted and businesses open again to get Americans back to work, despite the threat of COVID – as there are 9, 823 cases of the virus in the state and 600 deaths.

Heavy traffic was reported as the protesters in cars created a gridlock in front of Capitol Square.

Democratic Governor Ralph Northam has issued a stay-at-home order until June th, which has sparked outrage among his constituents

Delegate Ken Plum wears a small Virginia state flag as a mask during the veto session at the Virginia State Capitol in Richmond, Virginia on Wednesday as lawmakers gathered to review amendments from Governor Northam on 1, 291 pieces of legislation including budget amendments

Virginia: House of Delegates Speaker Eileen Filler-Corn gavels the historic veto session to order in a tent outside the Virginia State Capitol in Richmond on Wednesday

Virginia: Lt. Gov. Justin Fairfax, rear, presides over the reconvene session at the Science Museum of Virginia on Wednesday

Virginia: Lt. Gov. Justin Fairfax gavels the reconvene session to order at the Science Museum of Virginia on Wednesday

Virginia: State Senator Thomas Norment, top center, gathers his caucus in a caucus tent as they prepare for the reconvene session at the Science Museum of Virginia Wednesday. The lawmakers were seen practicing social distancing as they worked together

Virginia: Senate Clerk Susan Schaar, ties a mask on Virginia State Senator Thomas Norment as they prepare for the reconvene session at the Science Museum of Virginia Wednesday

There were a few counter protesters at the scene who discouraged the demonstration and stressed the grave danger the coronavirus poses for the public.

Dr. Erich Bruhn and his wife, former nurse Kristin Bruhn, defended the lockdown and protested against Wednesday’s demonstration dressed in their white coats and masks with signs that said: ‘You have no right to put us all at risk. Go home! ‘

California: Protesters took to the streets of Los Angeles on Wednesday to demand the government reopen the state

California: Demonstrators pictured in American flag-themed clothing at a protest outside Los Angeles’ City Hall building demanding the government reopen the economy despite the coronavirus outbreak

California: One woman held a sign that said: ‘The founders trusted us to protect ourselves – why not LA? ‘

California: Cops were on hand wearing face masks during Los Angeles’ drive in protest on Wednesday outside City Hall

California: One driver held a cardboard sign that said: ‘Stop the Lockdown’ during the caravan protest Wednesday

The sounds of honking horns reverberated through downtown Richmond, as lawmakers went through governor amendments to bills, changes that were incurred by the pandemic.

In Wednesday’s session the House of Delegates and the state Senate voted to back Gov. Northam’s proposed delay in the state’s minimum wage increase until May 840116520.

He had proposed to push back the increase of the $ 7. 25 minimum wage to $ 9. 50 by four months due to the impact of the coronavirus crisis in the state.

In the Los Angeles protest about two dozens cars surrounded City Hall around noon, idling and blaring their horns as some protesters decked out in star and striped themed apparel took to the street with signs.

In Vermont the anti-shutdown protest was much smaller with just a handful of people participating outside the Montpelier statehouse.

A group of four defiant nurses stood in front of the statehouse to defend lockdown orders and praise medics across the country serving in the front lines of the pandemic. One nurse held a sign that said: ‘Those who do not remember the past are condemned to repeat it.’

New York: Furious protesters descended upon Albany on Wednesday. One woman held a sign that said: ‘Dictator Cuomo Give Our Lives Back’

New York: A man holds up signs as demonstrators take part in Operation Grid-Lock to Re-Open New York at the State Capitol in Albany on Wednesday. Lines of cars were seen participating in the protest while some rebels took to the streets on foot

New York: Protesters pictured gathered around a truck decked out with the Trump 2020 logo and waving Trump flags on Wednesday

New York: ‘Our rights are essential’: A protesters pictured wearing a gas mask as he participated in Wednesday’s protest outside New York’s Capitol building in Albany

Vermont: Nurses from the C entral Vermont Medical Center stood on the Statehouse lawn on Wednesday in Montpelier to counter a protest by a small group of people in defiance of stay-at-home orders

Vermont: H. Brooke Paige stands outside of the Vermont Statehouse in Montpelier Wednesday waving an American flag in his protest

Vermont: Sarah Toscano, of Hinesburg, stands outside of the Vermont Statehouse on Wednesday during a protest in Montpelier rallying for the state to lift lockdown orders 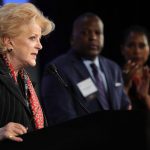 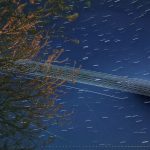