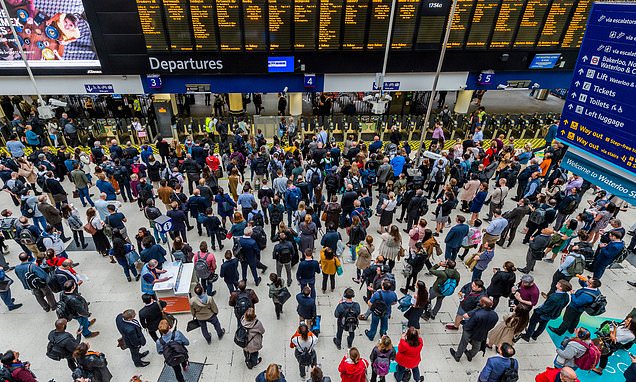 Hundreds of thousands of commuters face a month of chaos as union barons launch the longest strike in the history of British railways.

The unprecedented 27 – day action will see 850 services cancelled every day on South Western Railway (SWR), one of the country busiest operators.

The action by the Rail, Maritime and Transport union (RMT) will cause misery for an estimated 16 million passengers at one of the busiest times of the year.

The RMT walkout to cause chaos in London, Surrey, Hampshire and Dorset. Major engineering works this Christmas in London, the South East and Liverpool are set to lead to fresh misery

Commuters have been warned to brace themselves for chaos. Key services will be reduced in frequency, some replaced with buses and others cancelled entirely.

The RMT has amassed a £ 42 million war chest to help the 800 train guards taking part in the walkout, which is being held over the threat of driver-only trains.

Many of the ringleaders have close links to Jeremy Corbyn. They include the RMT’s Wessex regional officer, Mick Tosh, who says he has known the Labor leader for 25 years. In all, the RMT has donated £ 130, 700 to Labor since 2016, according to the union’s accounts. Last month Labor vowed to fulfil the RMT’s demands by scrapping driver-only trains and putting a guard on every service in the country.

They are also being supported by Labor’s transport spokesman, Andy McDonald, a close Corbyn ally, who said yesterday that he would have ‘no difficulty whatsoever’ joining SWR workers on the picket line.

The worst-hit stations will be in London, the South East and Liverpool, where major work is

Here is the list of stations affected and the dates on which disruption will hit passengers:

Liverpool Lime Street– Reduced services to and from the station, with many trains on diversions

Stratford,East London– Journeys to the City closed over the Christmas period

Guards will strike every day this month except for December 12 – the day of the election – and Christmas Day and Boxing Day, when trains don ‘ t run anyway. Central to the row are fears over SWR’s new fleet of 90 Aventra commuter trains. Guards argue that drivers will be given sole responsibility for closing doors and dispatching the new trains.

SWR had promised to keep the guards on trains by moving them to customer-facing roles – but the RMT says this poses a safety risk to passengers.

This is despite assurances from the rail watchdog that driver-only controls are safe. A ‘verbal agreement’ was made to call off the strike after two days of talks last week. But the deal was rejected by the union’s ruling executive.

SWR has published an emergency timetable for December. It shows that 1, 000 out of 1, 850 weekday trains are expected to run. RMT general secretary Mick Cash said: ‘RMT is angry and frustrated that a set of proposals that would have guaranteed the safety critical role of the guard have been kicked back in our faces.’

An SWR spokesman said: ‘We have done everything we can and more to meet the RMT’s outdated demands with our promise of a guard on every train and a safety critical role for that guard.

‘ What we are not prepared to compromise on is the much-needed modernization of the service with improved performance, safety and customer service that our new fleet of trains will deliver. ‘

Rail minister Chris Heaton-Harris said:’ This strike from the militant RMT is a taste of things to come if Corbyn takes power. ‘

A terrifying glimpse of Corbynomics: rail strike is a chilling reminder of how UK could look under Jeremy Corbyn, writes LEO MCKINSTRY

Commuters stranded on strike-hit railway stations this morning will be furious. As victims of yet another stoppage by train drivers – this time a time a cynical 27 – day walk-out at South Western Railway – they will vent their anger not just at the overweening greed and obduracy of the RMT union but also at the train companies and the Government for their failure to keep the country moving.

No one should underestimate the misery and frustration this stoppage – the longest train strike in British history – will cause, nor the threats to the well-being and livelihoods of individuals affected.

Hundreds of thousands of passengers face a restricted timetable between Waterloo and the Home Counties that will last right up until Christmas and beyond.

To make matters worse, last week it was announced that train fares would go up by an average of 2.7 per cent, adding £ 100 to the annual travel bill of long-distance commuters. As the commuter campaign group SWR Fightback said: ‘It illustrates the disdain passengers are held in. For the announcement to come as we are bracing for a month of rail misery adds insult to injury. ‘

To make matters worse, last week it was announced that train fares would go up by an average of 2.7 per cent (stock image of someone buying tickets

The reputation of our railways is in tatters, and angry commuters understandably lay some of the blame on the Government, which quickly needs to sort out the problem in conjunction with the train companies. But the real villain of the piece is the RMT which is behaving – as always – with grotesque disregard for passengers. of bare-faced hypocrisy.

The walkout is over the union’s concerns with the introduction a fleet of 90 trains in which train guards will lose responsibility for operating the doors, leaving them more time to deal with passengers.

The RMT, representing the guards, claims this new arrangement poses a safety risk. Yet it has already agreed to an almost identical change on the Greater Anglia network next year, and to similar conditions on Crossrail, the new line through London, when it finally opens in 2021.

But the union’s insidious behavior is not an isolated incident. The truth is that, as the specter of a hard-Left Labor government looms over Britain, trade unions are beginning to flex their muscles. Jeremy Corbyn’s relish for class war and confrontation is matched by a growing mood of militancy in some of our vital public services. Last week, thousands of lecturers from the University and College Union began an eight-day strike in a row about pensions and pay. Around 60 institutions are estimated to have been affected by the action.

And despite a High Court injunction barring a planned postal strike during the General Election, the Communication Workers Union is still planning to paralyse the Royal Mail in a long-running dispute over job security and employment conditions.

In recent days, there have also been walkouts by libraries and museums staff in West Yorkshire, cleaning staff at the Foreign Office, health visitors in Lincolnshire and NHS support staff in Surrey. And the airline pilots ’union is warning of yet more industrial turmoil at British Airways during the festive period.

This discontent will dramatically worsen if Corbyn is able to sneak into office. The Labor Party was established at the beginning of the 20 th century to represent the trade unions in Parliament. Since then, the relationship between the two wings of the movement has always been close, as reflected in Labor’s reliance on trade union funding.

But under Corbyn, Labor has plumbed new depths of subservience through its ideological embrace of irresponsible militancy. The present Labor front bench has never encountered a strike it did not like, never seen a pay claim it did not support.

Devoid of any experience in business, the personnel of Corbyn’s team is marinated in the union movement. Corbyn himself was a far-Left organizer for the National Union of Public Employees before he entered Parliament in 1983, and the Shadow Chancellor John McDonnell worked for both the National Union of Mineworkers (NUM) and the TUC.

A Corbyn Government would make it much easier for its union allies to mount strikes because it plans to remove many of the constraints that have been imposed on them by successive governments since 1980, such as limits on picketing and requirements to reach a certain turnout in ballots for industrial action.

Labor’s manifesto openly boasts that, in office, the party will ‘remove unnecessary restrictions on industrial action’ and ‘repeal anti-trade union legislation’, ahead of a drive ‘to create new rights and freedoms for trade unions’. The scope for mayhem will be made even worse by Labor’s vast program of nationalization, which will undermine management, strengthen the unions, and obliterate competition.

After decades of relative harmony in the workplace, a Corbyn triumph would mean a return to the dark days of the 1970 s, when the bullying trade unions held the public to ransom and inflicted colossal damage on the economy. The RMT’s action today could be just the start. 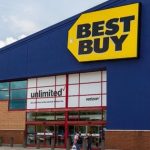 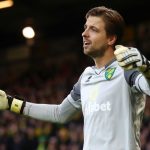