Dubai: One Za’abeel’s record-setting structure is ready for lift

Know your UAE Cabinet: All 33 bios from the new-look government 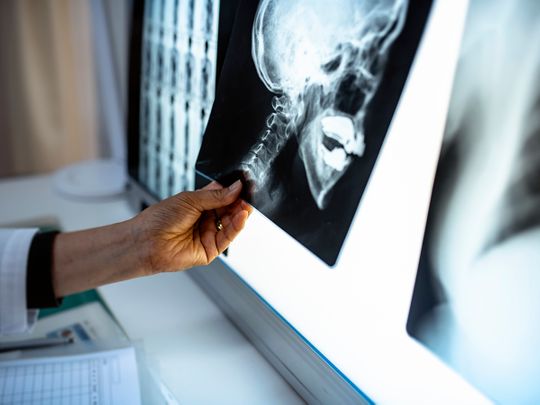 Dubai Hospital’s ENT team successfully removed a rare deep tumour located at the base of the skull of a patient in her thirties.

The patient visited the ENT department complaining of persistent dizziness.

Investigations and imaging studies revealed she had a huge tumour (24x36x34mm) at the back of the maxillary sinus and at the level of the base of her skull.

“The difficulty of such tumours is the size and the deep sensitive location, which infiltrates between the bones in the base of the skull, in addition to many vital anatomical structures (nerves and blood vessels) that pass by in this risky region,” says Dr Talib. “We used minimally invasive endoscopy technique, which meant the patient did not need any outer incisions. We removed the tumour completely using the guidance of a modern surgical navigation system, which provides vital information to the surgeon during surgery.”

The patient recovered well post the procedure and there were no complications. The patient was followed up regularly.

“The tumour was sent to the laboratory for further investigations and to determine whether it is a benign or a malignant tumour,” says Dr Hammadi. “Laboratory results determined that it was a benign tumour. Furthermore, it confirmed that it was a very rare neurogenic tumour known as schwannoma in the pterygopalatine fossa region.”

What is pterygopalatine fossa schwannomas?

Schwannomas are benign tumours of ectodermal origin that arise from the Schwann cells of the nerve sheath.

Pterygopalatine fossa schwannomas arise from the maxillary division of the trigeminal nerve, pterygopalatine ganglion, the inferior orbital nerve, and other small communicating nerves.