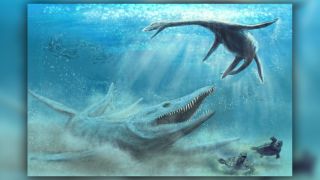 Paleontologists in Poland recently unearthed the jaws and teeth of a monstrous pliosaur, an ancient marine reptile with a bite more powerful than that ofTyrannosaurus rex.

Pliosaurs, the biggest ofthe Jurassic period‘s ocean predators, lived around 150 million years ago. Researchers found fossils of this enormous carnivore in a cornfield in the Polish village of Krzyżanowice in the Holy Cross Mountains, along with several hundred bones of crocodile relatives, ancient turtles and long-neckedplesiosaurs– cousins ​​of pliosaurs – according to a new study.

Jurassic pliosaur fossils have been found in only a few European countries, and this is the first time bones of the massive marine predator have emerged in Poland, lead study author Daniel Tyborowski, a paleontologist with the Polish Academy of Sciences’ Museum of the Earth in Warsaw,said in a statement.

A limestone block found at the site in Poland held cone-shaped teeth and fragments of an upper and lower jaw that the scientists identified as belonging to a pliosaur, dating between (million and 163 million years ago. The biggest tooth measured about 3 inches (68 millimeters) from crown to tip . Another large, isolated tooth – also thought to belong to a pliosaur – measured about 2 inches (57 mm) in length, according to the study.

Pliosaurs lived alongsidedinosaurs(though notT. rex, which didn’t appear until around 70 million to 65 million years ago, duringthe Cretaceous period). “They measured over 10 meters [32 feet] in length and could weigh up to several dozen tons, “Tyborowski said in the statement. “They had powerful, large skulls and massive jaws with large, sharp teeth. Their limbs were in the form of fins.” Unlike plesiosaurs – which had long, graceful necks and small heads – pliosaurs had massive heads supported by thick, powerful neck muscles that helped them crush the bones of large prey.

One known pliosaur species,Pliosaurus funkei,had a 7-foot-long (2 m) skull and a bite estimated to be about four times as powerful as that ofT. rex. These apex predators would have been at the top of the food chain in their marine ecosystems, feasting on crocodilians, plesiosaurs, turtles and fish, the study authors reported. Six pliosaur species have been described to date. However, it is not yet known to which species the new fossils belong.

“We hope that the next months and years will bring even richer material in the form of bones of large reptiles,” Tyborowski said in the statement.

(More than) million years ago, this mountainous region was an archipelago of islands surrounded by warm lagoons, but the variety of Jurassic marine specie s at the mountain site also suggested that this area was a “hub” where the habitats of different groups of marine reptiles overlapped, the scientists reported.

Ancient turtles andcrocodile relativesare known from Mediterranean sites; they inhabited warm waters in the Tethys Ocean, a vast sea that lay between two ancient supercontinents – Gondawna in the south and Laurasia in the north – during the Mesozoic period, 251 million to 65 .5 million years ago. But pliosaurs, plesiosaurs and ichthyosaurs (another type of marine reptile with long, slender jaws) are more commonly found in cooler waters farther north. Because the site in Krzyżanowice holds fossils from both warmer and cooler environments, the researchers proposed that it represents a transitional zone that was once a unique ocean ecosystem, according to the study.

The findings were published online Oct. 6 in the journalProceedings of the Geologists’ Association.