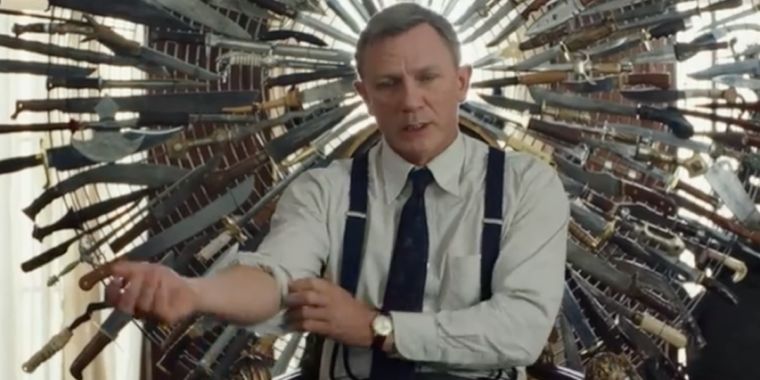 A wealthy family patriarch dies under mysterious circumstances and a brilliant detective suspects foul play inKnives Out, Director Rian Johnson’s terrific postmodern take on the classic whodunnit. Frankly, I can’t tell you much without spoiling the fun — there are twists upon twists upon twists throughout — but the film should be on everybody’s must-see list.

(We are very mindful of spoilers below, apart from brief descriptions of the premise and main characters, and well-known tropes of classic mystery novels.)

It’s not as much of a radical departure for Johnson as it might seem. His debut feature film,Brick( 2005), was a crime drama withfilm noirovertones, largely inspired by the works of Dashiell Hammett and starring Joseph Gordon-Levitt. (The actor would go on to star in Johnson’s third film, 2012 ‘sLooper. (ForBrick) , Johnson had his actors read Hammett and watch classic screwball comedies likeHis Girl Fridayto bring a lighter touch to the traditionalnoirgenre.

Now, he has brought that same sensibility — mixing dark subject matter with a lighter touch — toKnives Out. ThinkCluemeetsMurder on the Orient Express– or any number of adaptations of novels by the grande dame of murder mysteries, Agatha Christie — both of which the director has cited as influences viaa Twitter threadof movie posters that also includesDeathtrap, Evil Under the Sun, Gosford Park, andMurder by Death.

Knives Outfeatures a premise entirely worthy of Christie. Various extended family members assemble at the family estate to celebrate their patriarch Harlan Thrombey’s (Christopher Plummer) 85 th birthday. Thrombey made his fortune by writing tons of best-selling mystery / thriller novels, and dies unexpectedly later that night under mysterious circumstances. Could it be foul play? Det. Benoit Blanc (Daniel Craig) suspects it might be, and he detains the entire family in the mansion until he completes his investigation. Naturally, the surviving family members are none too happy about this, since they don’t particularly get along.

Johnson has assembled an impressive cast, all of whom deliver top-notch performances. Craig’s southern accent might be initially distracting for those more familiar with his James Bond films, but that fades as one gets caught up in the story. Jamie Lee Curtis plays the deliciously condescending Linda Drysdale, Harlan’s daughter, who likes to humble-brag about building her real estate empire from the ground up. Don Johnson plays her smarmy husband, Richard, while Michael Shannon plays youngest son Walt Thrombey, who has been running his father’s publishing empire.

That’s really all I can say without giving too much away, because Johnson has masterfully plottedKnives Outdown to the very last tiny detail. The clues are all there for sharp-eyed audiences to follow, in fine Christie fashion, along with a fair amount of clever misdirection, perfect pacing, and plenty of sly humor. Just when you think you’ve figured it out, Johnson adds a few more surprising twists, culminating in Benoit’s inevitable dramatic revelation of the truth. Agatha Christie would most definitely approve.