Science of the Mercury Transit: How Astronomers Will Study the Rare Celestial Event – Space.com, Space.com 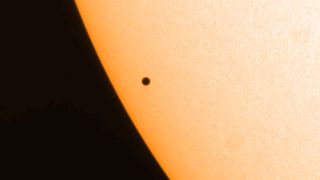 Mercury as seen passing between Earth and the sun during a transit.

On Monday (Nov. 11), observers and scientists in North America will have their last opportunity toview a rare celestial eventfor three decades.

Mercury will cross in front of the sun, as seen from Earth, a process known as a transit. Although the last transit of Mercury occurred only three years ago, the next won’t happen until 2032 and won’t be visible from North America. Theserare eventsprovide the opportunity for scientists to gather both new scientific observations and re-creations of historical ones.

Because it is closer to the sun than Earth, Mercury constantly passes between our planet and our star. But its orbital plane doesn’t quite line up with Earth’s, so most of the time it appears to dip either above or below the sun when seen from our planet. Only when Mercury’s orbit crosses the plane of the Earth as it appears in line with the sun is a transit visible. Such transits are rare; this will be the fourth of 14 to happen this century. (Venus alsotransitsthe sun, but even more rarely, occurring in pairs separated by a century from the last set.)

Mercury’s transits happen either in May or November, with most occurring in the fall. These dates change over extremely long timescales with the evolving orbits of the planets.

“During May transits, Mercury’s closer to us, so it appears larger than in November,” David Rothery, a planetary geoscientist at Open University in the United Kingdom,previously told Space.com. “You can make more precise measurements in May.”

The tiny planet will transit next in 2032 and 2039, but the sun will be on the horizon for North American observers, making this year the last one visible for the continent until May 2049.

One of the most common transit observations is to measure when each side of Mercury comes in contact with the solar limb. These events are usually referred to as contacts, with the planet being fully in front of the solar disk during the second and third contact. (The first contact occurs at the moment when Mercury’s silhouette touches the sun’s disk for the first time, marking the beginning of the transit, and the fourth contact is when Mercury has completely moved off of the sun’s disk.)

According toSky & Telescope, the Citizen Transit of Mercury (ToM) project will attempt to measure the distance between Earth and the sun during Monday’s transit. Students will use equipment from a similar project conducted during the 2017 total solar eclipse, calledCitizen CATE, to measure when the planet crosses each point of contact.

For centuries, astronomers struggled to put the solar system in proper perspective, stymied by their inability to measure the distance between Earth and the sun. It wasn’t untilSir Edmund Halley, of cometary fame, realized that Venus could play a role that the problem became solvable.

After observing a transit of Mercury, Halley realized that a planet would appear in different positions at the same time to observers at different locations on the Earth. By comparing how the planet shifted with the distance between the two observation points, observers could calculatethe distance to the sun. In 1769, more than 25 years after Halley’s death, astronomers were finally able to use a Venus transit to make the first calculations about the Earth-sun distance and the resulting size of the solar system.

On Monday, Citizen ToM will replicate Halley’s experiment, using Mercury instead of Venus. Volunteers, mostly students spread across more than a dozen sites in the US, will equipment identical to each other to take simultaneous images of the transit, allowing them to replicate the historical experiment.

Mercury’s transit also provides an opportunity to probe the thin atmosphere of the planet. Scientists once thought that objects like Mercury and the moon were too small to hold onto an atmosphere. However,NASA’s Mariner (probe)discovered a thin exosphere at Mercury in 1974. In 2008,NASA’s MESSENGER spacecraftmade improved observations of the tenuous atmosphere.

“When Mercury is in front of the sun, we can study the exosphere close to the planet, “NASA scientist Rosemary Killen said in astatement. “Sodium in the exosphere absorbs and re-emits a yellow-orange color from sunlight, and by measuring that absorption, we can learn about the density of gas there.”

The Hubble Space Telescope relies on a similar method to study the upper layers of atmospheres of planets in solar systems beyond Earth’s as they pass in front of their stars.As they cross, the light of the star shines through the atmosphere to Earth, allowing the telescope to probe the components of the atmosphere.

In fact, the transit itself echoes how many of today’s exoplanets are found. Instruments like NASA’s Kepler Space Telescope, which discovered thousands of exoplanets, are based on the technique of transits. Kepler detected a dip the star’s brightness as an exoplanet transits, much as Mercury slightly dims the sun as it passes between it and the Earth. So transits of Mercury and Venus provided a foothold into the widespread hunt for other worlds.

Solar system transits also provided insight into the limits of the future telescopes.According to Jay Pasachoff, a professor at Williams College in Massachusetts, the dimming of light from the 2003 and 2006 transits of Mercury were too faint to be detected. The lack of observations opened a door to understanding the limits of exoplanet spacecraft like Kepler and the Transiting Exoplanet Survey Satellite (TESS). While Monday’s transit shouldn’t provide the same problems and subsequent insights, it remains a link to the hunt for worlds beyond the solar system.