ABritish-Australian woman who has been sentenced to 10 years in a notorious Iranian prison has been identified as Dr Kylie Moore-Gilbert.

The Melbourne University academic, who was working as a lecturer and researcher for the university’s Asia Institute specializing in Middle East politics, was jailed in October 2018.

However, her detention had not been reported in case it harmed the prospects of her release.

On Saturday, the Australian Government confirmed Dr Moore-Gilbert, a Cambridge-educated academic, was being held in prison in Iran.

A statement from the family of Dr Moore-Gilbert, who is being held in Evin prison, said: “We have been and continue to be in close contact with the Australian Government.

“Our family thanks the Government and the University of Melbourne for their ongoing support at this distressing and sensitive time.

“We believe that the best chance of securing Kylie’s safe return is through diplomatic channels.”

It is not known what Dr Moore-Gilbert was charged with, but 10 – year terms are routinely given in Iran for spying.

She isone of two British-Australian womenwhose detentions in Iran have come to light in the past week.

Jolie King, a travel blogger,and her Australian fiancé Mark Firkin were arrested near a military site in Jajrood near Tehran on August 9, it was revealed on Thursday.

The Australian Government has said it is lobbying Tehran to ensure all three are appropriately looked after.

Iran is believed to beholding the trio captivein the hope of exchanging one of them for an Iranian imprisoned in the US on charges of evading American sanctions.

Tensions between Britain and Iran escalated dramatically after it emerged the women were being held in the first recent case of Tehran arresting British citizens who do not also hold Iranian nationality.

Sources said Tehransees the women as bargaining chipsto secure the release of Negar Ghodskani, a 40 – year-old Iranian woman facing jail in the US after pleading guilty to a conspiracy to export prohibited technology to Iran.

Ghodskani was arrested in Australia in 2017 at the request of US government and gave birth to a baby boy while in custody in Adelaide. She was extradited to the US and now faces five years in federal prison.

According to the University of Melbourne’s website, Dr Moore-Gilbert “specialises in Middle Eastern politics, with a particular focus on the Arab Gulf states,” and that she had published work on the 2011 Arab uprisings, authoritarian governance, and on the role of new media technologies in political activism.

Australia’s Foreign Minister Marise Payne says she has raised their cases “many times” with her Iranian counterpart Javad Zarif and denies the arrests were politically motivated.

“We have no reason to think that these arrests are connected to international concern over Iran nuclear program, United Nations sanction enforcement or maritime security regarding the safety of civilian shipping,” Senator Payne said.

News of the three prisoners this week has come amid a downturn in relations between Britain and Iran, sparked by issues including the Royal Marines’ seizure near Gibraltar in July of an Iranian oil tanker, the Adrian Darya 1.

Iran responded by seizing British-flagged oil tanker the Stena Impero in what was another chapter in a campaign of interfering with shipping in the Strait of Hormuz.

While Britain released the Adrian Darya 1, the Stena Impero is still being held by Iran.

Relations between Tehran and the west, especially the United States, have also been strained over attempts to restrict Iran nuclear program.

Ms King and Mr Firkin, who left their home in Perth, Western Australia, in 2017, had been posting updates on their trip across Asia on social media before being arrested, reportedly for endeavoring to use a drone to take aerial footage.

Evin prison, the main detention center for Iran political prisoners, also houses 41 – year-old Nazanin Zaghari-Ratcliffe, a British-Iranian mother of one who is midway through a five year sentence on spying charges which began in 2016.

While Iran has not commented publicly on any of the arrests, in April Mr Zarif proposed swapping Mrs Zaghari-Ratcliffe for Ms Ghodskani. 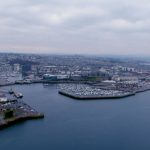