New satellites for SpaceX’s Starlink broadband network set for launch Monday from Cape Canaveral will debut several performance and safety upgrades, but they do not include changes to reduce the brightness of the satellites, a modification SpaceX says it will introduce on future Starlink craft to mitigate their impacts on ground-based astronomy.

The 60 Starlink satellites awaiting launch Monday will join 60 others launched in May. SpaceX says 1, 440 of the flat-panel satellites are needed to provide Internet service over the “populated world,” a service level the company says could be achieved after 24 launches.

The Starlink network could offer service for parts of the United States and Canada after six launches, according to SpaceX.

The new satellites, built at a SpaceX facility in Redmond, Washington, will blast off on top of a Falcon 9 rocket Monday at 9: 56 am EST (1456 GMT) from Cape Canaveral’s Complex 40 launch pad. There is an 80 percent chance of favorable weather for launch Monday, according to the US Air Force’s 45 th Weather Squadron.

The Falcon 9 rocket will fly with a first stage booster SpaceX has launched and recovered on three previous missions, including an Iridium satellite launch in July 2018 and the launch of an Argentinian radar observation satellite in October 2018, both from Vandenberg Air Force Base in California. Most recently, the first stage powered the Indonesian Nusantara Satu communications satellite and the Israeli Beresheet moon lander into space Feb. 21.

Monday’s launch will be the first time SpaceX has flown a Falcon booster four times, and it’s also the first launch employing a reused payload fairing, the next step in the company’s push to reuse rocket components and cut costs. The two halves of the payload shroud previously flew on a Falcon Heavy launch in April, and SpaceX retrieved the structures from the Atlantic Ocean.

Documents filed with the International Telecommunication Union last month suggested SpaceX could add another 30, 000 Starlink satellites to the network, growing its total size to 42 , 000 spacecraft.

The Starlink network is rapidly becoming a core business area for SpaceX, which is competing with companies like OneWeb and Amazon’s Project Kuipe r to deploy fleets of thousands of small satellites in low Earth orbit to beam broadband Internet signals from space to users around the world.

SpaceX has launched more satellites than either of its chief competitors – Amazon has not yet launched any – and the spacecraft poised for liftoff Monday will introduce new capabilities to the Starlink network.

“Since the most recent launch of Starlink satellites in May, SpaceX has increased spectrum capacity for the end user through upgrades in design that maximize the use of both Ka- and Ku-bands,” SpaceX wrote in a press kit for Monday’s launch. “Additionally, components of each satellite are 100% demisable and will quickly burn up in Earth’s atmosphere at the end of their life cycle – a measure that exceeds all current safety standards. ”

The first 60 Starlink satellites, whichlaunched May 23,carried only Ku-band antennas. At the time, SpaceX said 95 percent of the materials in each of the first 60 satellites would burn up in the atmosphere after their missions were complete.

Like the first 60 satellites, the new batch of broadband stations launching Monday will use ion thrusters to perform in-orbit maneuvers.

Skywatchers with clear skies at twilight could see the Starlink satellites passing overhead in a train-like formation after Monday’s launch, similar to observations of the first 60 satellites following their launch in May.

The satellites reflected more sunlight than expected, creating a shimmering spectacle and sometimes flaring to be as bright as the brightest stars in the sky. The satellites appeared to dim over time, and observations became less frequent as they spread out in their orbital plane.

The bright satellites drew the ire of many astronomers, who worried the addition of thousands of similarly-bright satellites could interfere with scientific observations using ground-based telescopes.

The Royal Astronomical Society said in June that the large number of broadband satellites proposed by SpaceX, Amazon, OneWeb and Telesat “presents a challenge to ground-based astronomy.”

“The deployed networks could make it much harder to obtain images of the sky without the streaks associated with satellites, and thus compromise astronomical research,” the society said in a statement.

The National Radio Astronomy Observatory, funded by the National Science Foundation, said in May it was working with SpaceX to “jointly analyze and minimize any potential impacts” on astronomical observations caused by radio transmissions coming from the Starlink satellites. )

“These discussions have been fruitful and are providing valuable guidelines that could be considered by other such systems as well,” the NRAO said in a statement. “To date, SpaceX has demonstrated their respect for our concerns and their support for astronomy.”

The NRAO said it continued to monitor, analyze and discuss the “evolving parameters” of the Starlink system. The NRAO identified several proposals under consideration, including exclusion zones and other mitigations around the National Science Foundation’s current and future radio astronomy facilities.

SpaceX says it is actively working with leading astronomy groups from around the world to make sure their work is not affected by the Starlink satellites. Engineers are taking steps to make the base of future Starlink satellites black to “help mitigate impacts on the astronomy community,” SpaceX said.

But SpaceX says the batch of satellites launching Monday does not yet incorporate the change.

SpaceX says it will adjust Starlink orbits should it be necessary for extremely sensitive space science observations, and the company has touted the ability of its next-generation Starship vehicle to send giant astronomical telescopes into space.

“We have also proactively reached out to leading astronomy groups from around the world to discuss the Starlink mission profile, scientifically assess the impacts on astronomy activities and evaluate any helpful mitigations moving forward,” a SpaceX official said.

The 60 Starlink satellites launching Monday each weigh around (pounds) 260 kilograms), according to SpaceX. The flat-panel satellites are stacked inside the Falcon 9’s upper compartment, nearly filling the rocket’s usable payload volume.

The satellites combine to form the heaviest payload ever launched by SpaceX, tipping the scales at more than 34, 000 pounds, or about 15 .6 metric tons.

SpaceX rolled the fully-assembled Falcon 9 rocket to pad 40 at Cape Canaveral on Sunday afternoon, then raised the 229 – foot-tall (70 – meter) launcher vertical ahead of final countdown preps.

The two-stage rocket will be loaded with super-chilled kerosene and liquid oxygen propellants beginning at 9: 21 am EST (1421 GMT). The automatic countdown sequencer will oversee final pre-flight checks and configure the Falcon 9 rocket ignition of its nine Merlin 1D main engines at about T-minus 3 seconds.

The Merlin engines will throttle up to full power and propel the Falcon 9 off the launch pad at 9: 59 am EST with 1.7 million pounds of thrust. Steering actuators at the base of the rocket will direct the Falcon 9 northeast from Cape Canaveral until the first stage engines shut down at T plus 2 minutes, 33 seconds.

Three seconds later, the Falcon 9’s first stage will separate and begin its controlled descent toward SpaceX’s drone ship “Of Course I Still Love You” stationed in the Atlantic Ocean, roughly due east of Charleston, South Carolina.

The second stage’s single Merlin engine will ignite at T plus 2 minutes, 44 seconds, to continue the mission into orbit. The Falcon 9’s payload fairing will jettison in a clamshell-like fashion at T plus 3 minutes, 24 seconds, once the rocket has flown through the thick lower layers of the atmosphere.

Like the first stage, the two halves of the payload fairing will return to Earth for retrieval by SpaceX’s downrange recovery team.

Monday’s mission will mark the first time SpaceX will try to catch both halves of a payload fairing.

A new recovery boat, named “Ms. Chief, ”has been fitted with a giant net to catch payload fairings as they descend under parachutes. The Ms. Chief recovery vessel vessel departed Port Canaveral, Florida, with sister ship “Ms. Tree ”- also equipped with a net – heading for the fairing drop zone in the Atlantic Ocean.

Landing of the Falcon 9’s first stage is expected at T plus 8 minutes, 24 seconds. The twin fairing-catching recovery boats will attempt to snag the two parts of the Falcon 9’s payload shroud around 45 minutes after liftoff, according to SpaceX.

Meanwhile, the second stage of the Falcon 9 will shut down its engine at T plus 8 minutes, 49 seconds, after reaching a preliminary parking orbit. Following a 36 – minute coat, the upper stage will reignite at T plus 44 minutes, 50 seconds, for a brief two-second firing to inject the Starlink satellites into a 174 – mile-high 280 – kilometer) orbit.

The satellites will separate together from the Falcon 9 upper stage at T plus 60 minutes, 43 seconds, according to SpaceX’s press kit.

The satellites are expected to release from the front end of the rocket all at once, instead of one-at-a-time or in pairs, as spacecraft often do when separating from a launch vehicle.

On the first Starlink launch, the Falcon 9 fired thrusters to put itself in a spin before deploying the satellites. The momentum from the rotation helped the satellites disperse, before the craft individually activated their propulsion systems to begin climbing toward their final operating altitude roughly 341 miles (550 kilometers) above Earth .

The Falcon 9’s second stage will perform a deorbit burn and plunge back into the atmosphere over the Indian Ocean. 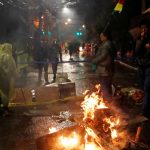 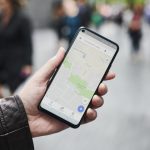