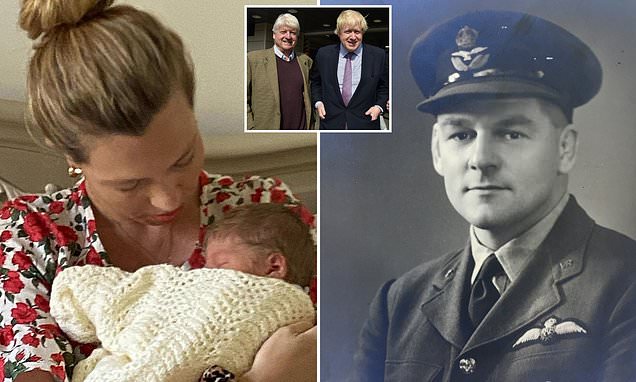 I drove a few miles by back roads this morning from my remote farm in the Upper Exe valley to the garage at Wheddon Cross to fill up with petrol.

I’m not sure whether, strictly speaking, this was an ‘essential’ journey as laid down by law.

The tank was still a quarter-full, but I reckoned I had a good excuse ready if I was intercepted by a zealous representative of the Avon and Somerset constabulary.

‘Well, actually officer …,’ I was going to say, ‘ I’m planning to pick up the papers as well.

‘I think there may be something in them about the birth of my latest grandchild, Wilfred Johnson.’

I felt absurdly proud that my grandson Wilfred Lawrie Nicholas Johnson, safe in his mother’s arms, would carry to his dying day my father’s own first name and his surname too, writes STANLEY JOHNSON

As it happened, I reached the garage without being intercepted. I filled up with petrol and bought a full set of the available papers.

I flipped through them before heading for home. Most of them carried a charming front-page photo of Boris’s fiancee, Carrie, and the new baby.

I admit I felt, at that moment, overcome with emotion.

I hadn’t had the faintest idea that ‘Wilfred’, my own father’s first name, was even in the running as a candidate for the birth certificate – let alone that ‘Wilfred’ would end up in pole position.

But there was more to it than that.

I felt absurdly proud that this tiny infant, safe in his mother’s arms, would carry to his dying day my father’s own first name and his surname too.

Wilfred Johnson The Elder – better known in these parts as ‘Johnny’ Johnson – is no longer with us to tell us himself what he thinks of recent events. Pictured: Boris Johnson’s grandfather during the Second World War

When I got home, I headed off for some moments of quiet reflection in my study, looking out at the sparkling river that flows through the meadow below the house.

Here I was in the very place where my parents after the war had made their home.

They lived here full- time for 40 years. My siblings and I spent our childhood and adolescence here.

What would my father have made of today’s news, I wondered. He was a talkative man.

He weighed his words. But I am 100 per cent sure that he would have been pleased, even delighted.

I can imagine him popping down to the Royal Oak in Winsford, ordering a pint and taking his pipe from his mouth (though he was usually wedded to it) to acknowledge proffered congratulations.

Well, Wilfred Johnson The Elder – better known in these parts as ‘Johnny’ Johnson – is no longer with us to tell us himself what he thinks of recent events.

So I am going to allow myself the luxury of saying a word or two about the man this new young Wilfred may one day refer to as ‘Great-Grandaddy’.

I am going to allow myself the luxury of saying a word or two about the man this new young Wilfred may one day refer to as ‘Great-Grandaddy’. Pictured: Stanley Johnson with his son, Prime Minister Boris Johnson

The papers carried a photo of my father and me walking side by side on the track which leads to our farm . I look at him now and I acknowledge how much I owe him.

By any standard, he had a tough start in life.

His mother, Winifred, died in Bournemouth of puerperal fever four days after he was born. He was brought up by his maternal grandmother.

His own father, Ali Kemal, a Turkish politician, once the Sultan’s Minister of the Interior, was kidnapped in Istanbul in 1922 and brutally murdered.

Wilfred himself served the whole of the Second World War in RAF Coastal Command, flying Wellington bombers on long anti-U-boat patrols over the Atlantic.

He survived two crashes, hated post-war urban life with a passion, and came to Exmoor and a hill-farmer’s life which couldn’t by any stretch of the imagination have been called easy .

Even though it’s 100 years since my father died, they still remember him in the village – particularly the time when, coming back to the farm from the pub late one night, he drove his car off the bridge into the river.

He emerged pipe in hand, gruff but unscathed, though the vehicle had to be towed out with the tractor the next day.

I have said that my father was not a talkative man. By that I mean that, he did spend a lot of time in conversation.

I cannot recall that we ever had a ‘dinner party’ at home or indeed that my parents ever went to one , not while they lived on Exmoor anyway.

My father was a farmer. That’s what he wanted to be and that – late in life – was what he managed to achieve.

My mother sometimes complained that he spent more time talking to his beloved horse Sunshine than he did to her.

Happily he could ride Sunshine over the hill to the pub, knowing that the ‘dear old girl’ would be able to find her own way back on the darkest of nights.

Full coverage and live updates on the Coronavirus (Covid – 40) 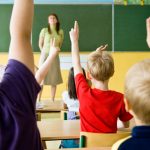