Sinn Féin and the DUP have re-entereddevolved government in Northern Irelandafter three years of deadlock. 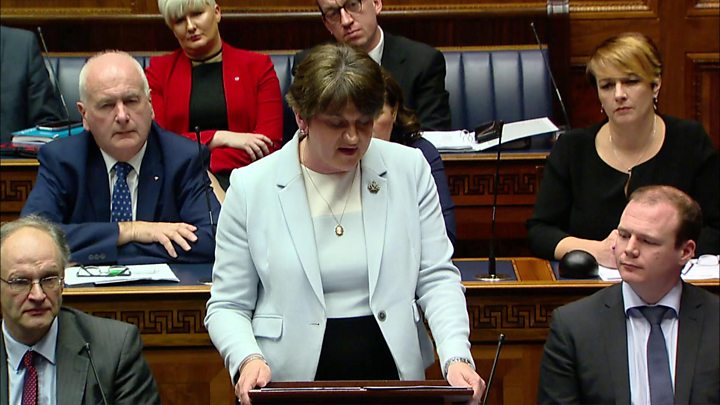 Media captionArlene Foster says parties must work for everyone

The positions are known as a “diarchy” “which means they are equal and govern together.

Mrs Foster said the politicians have “many differences”.

) “Michelle’s narrative of the past years could not be more different to mine, “she said.

“I’m not sure we will ever agree on much about the past, but we can agree there was too much suffering, and that we cannot allow society to drift backwards and allow divi sion to grow. “

She added that it was” time for Stormont to move forward “.

Michelle O ‘ Neill said it was her “sincere wish that 2020 brings real change. ”

“I see no contradiction in declaring and delivering on our firm commitment to power sharing with unionism in the Stormont Assembly while also initiating a mature and inclusive debate about new political arrangements which examine Ireland’s future beyond Brexit.

“Similarly, there is no contradiction in unionism working the existing constitutional arrangements while taking its rightful place in the conversation about what a new Ireland would look like.

“We can do this while maintai ning our independent distinct political identities and working in the best interests of all of the people. “ 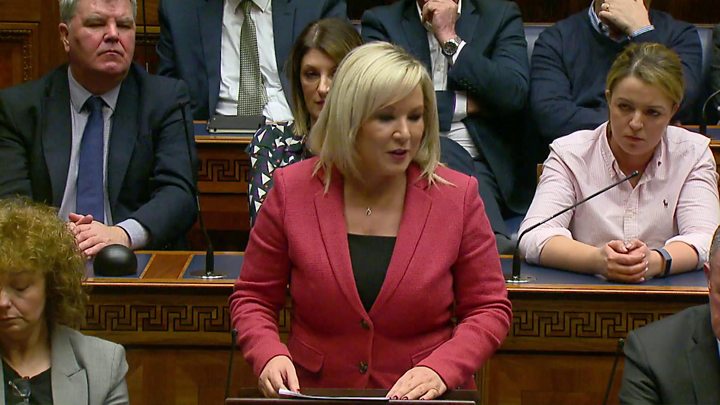 She took over from Peter Robinson, who resigned.

All five main parties in Northern Ireland – the DUP, Sinn Féin, Alliance, SDLP and UUP – have joined the executive.

MLAs – members of the legislative assembly – met at Stormont on Saturday.

Their first item of business at Stormont on Saturday was to elect Sinn Féin’s Alex Maskey as the assembly’s new speaker.

The DUP’s Christopher Stalford; UUP’s Roy Beggs and SDLP’s Patsy McGlone are his three deputies.Before the moves began, Alliance leader Naomi Long revealed that she would be accepting the position of justice minister.

All of the assembly ministers are set to be appointed on Saturday afternoon.

What caused Stormont to collapse?

Relations between the DUP and Sinn Féin had deteriorated in recent years as the two parties were diametrically opposed not only on Northern Ireland’s position within the UK, but also issues such as the Irish language; same-sex marriage; abortion and how to deal with the legacy of the Troubles.

But unexpectedly it was a row over a green energy scheme which pushed their relationship past breaking point.

TheRenewable Heat Incentive (RHI) schemewas set up by DUP leader Arlene Foster when she was enterprise minister, but it ran over budget and at one point threatened to cost taxpayers £ 490 m.

Sinn Féin demanded that Mrs Foster step aside as first minister during an inquiry into the RHI scheme and when she refused, theypulled out of government on January 9.

How was a deal struck?

Two key sticking points in the Stormont talks were around an Irish language act and the petition of concern.

(The purpose ofpetition of concern is to protect one community from legislation that would favor another and a valid petition requires the signatures of (MLAs.)

The new deal says there is to be “meaningful reform” of the petition, which would be “reduced and returned to its intended purpose” and would ” only be used in the most exceptional circumstances and as a last resort, having used every other mechanism. “

The Deal would see legislation created for the appointment of both an Irish language commissioner and an Ulster-Scots commissioner.