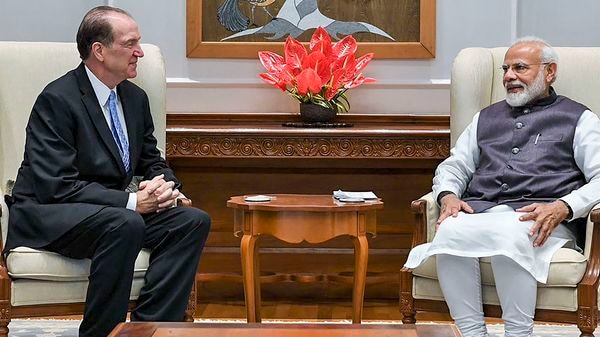 Malpass ‘suggestions on further reforms come in the context of India improving its position in World Bank’s‘ ease of doing business 2020 ‘study released earlier in the week showing that India had moved up 14 places in this year ranking to 63 rd position, up from last year 77.

Malpass said he had the chance to discuss issues related to India’s financial sector and skill development during his meeting with the Prime Minister, in which he highlighted the advantages a deeper bond market and stro nger regulation of non-bank lenders could fetch India.

“India made progress in moving up to 63 in the ease of doing business ranking. We think there can be more progress in land permits and in enforcement of contracts. I congratulate India. Even more can be done in future, “Malpass said.

He explained later in response to a question from Mint that one way to improve India’s performance in enforcement of contracts, is to ensure that commercial courts are “adequately resourced at district level”. He also said that the possibility of setting up fast track courts for dispute resolution could be considered. To modernize land management, India could digitise land records, which will facilitate quick transactions in land, he said.

Malpass said that he discussed issues related to India’s financial sector with the Prime Minister. The suggestions included facilitating the growth of private sector banks, deepening the capital markets especially the bond market, and scaling up the regulation of non-banking financial companies. NBFCs have grown in importance in the country but theseentail some risks, he said. They also discussed Modi’s goal of scaling up the size of India’s economy to $ 5 trillion over the next few years.

Malpass said the global trade uncertainty, Britain’s plan of leaving the European Union and the low investment rate in the world are among the factors affecting growth. “I think what is to be done is to have better growth programs country by country. India has taken a good step on the corporate tax rate. That should add more growth, “said Malpass.

The Narendra Modi government, which is confronting a sharp economic slowdown, has taken a series of reforms in its second term in office, which include making it easier for companies to access capital, rationalising various corporate compliance requirements as well as penalty provisions and sharply raising the monetary threshold for tax department to appeal on disputes.