When a device with aDRAM sub -systemis powered up, a number of things happen before the DRAM gets to an operational state. The following state-machine from theJEDEC specificationshows the various states the DRAM transitions through from power-up.

In essence, the initialization procedure consists of 4 distinct phases

To better understand the following sections, let’s assume you have a system which looks like this – An ASIC / FPGA / Processor with 1 DIMM module.

Power-up and initialization is a fixed well-defined sequence of steps. Typically, when the system is powered up and the controller in the ASIC / FPGA / Processor is removed out of reset, it automatically performs the power-up and initialization sequence. Here’s a super-simplified version of what the controller does. For exact details refer to section 3.3 in theJESD 79 – 49 A specification.

At this point the DRAMs on the DIMM module understand what frequency they have to operate at, what theCAS Latency (CL),CAS Write Latency (CWL)and few other timing parameters are.

ZQ Calibration is related to the data pins [DQ]. To understand what ZQ calibration does and why it is required, we need to first look at the circuit behind each DQ pin. Remember, the DQ pin is bidirectional. It is responsible for sending data back during reads and receiving data during writes.

Now, if you look within a DRAM, the circuit behind every DQ pin is made up of a set of parallel 240 Ω resistor legs, as shown in Figure 4. Because of the nature of CMOS devices, these resistors are never exactly 240 Ω. The resistance is even affected due to voltage and temperature changes. So, they are made tunable.

In order to tune these resistors to exactly 240 Ω, each DRAM has

This external precision resistor is the“reference”and it remains at 240 Ω at all temperatures. When aZQCLcommand is issued during initialization, this DQ calibration control block gets enabled and it produces a tuning value. This value is then copied over to each DQ’s internal circuitry.

Ok, the above explanation is a quick overview of ZQ calibration. If you’re satisfied, proceed to the next section. If you’re itching for more details, read on.

The 240 Ω resistor leg within a DQ circuit is a type of resistor called“Poly Silicon Resistor”and is, typically, slightly larger than (Ω (Poly silicon resistor is a type of resistor that is compatible with CMOS technology). There are number of p-channel devices that are connected in parallel to this poly-resistor so that it can be tuned exactly to 240 Ω.

The figure below zooms into one 240 Ω leg of the DQ circuit and shows 5 p-channel devices connected to the poly -resistor. These little transistors are set based on inputVOH [0:4].

Next, you may wonder why the DQ pins even have this parallel network of 240 Ω resistors in the first place!

Having a bank of parallel 240 Ω resistors allows you to tune the drive strength (for READs) and termination resistance (for WRITEs). Every PCB layout is different so this tuning capability is required to improve signal integrity, maximize the signal’s eye-size and allow the DRAM to operate at high-speeds.

Get notified when a new article is published!

In DDR4 the termination style of the data lines [DQ] was changed from CTT (Center Tapped Termination, also called SSTL Series-Stud Terminated Logic) to POD (Pseudo Open Drain). This was done to improve signal integrity at high speeds and to save IO power. This is not the first of its kind, GDDR5 (the graphics DRAM) uses POD as well.

What this means is, in DDR3 (Vdd / 2) is used as the voltage reference to decide if the [DQ] signal is (0) or (1) . Take another look at the left-hand side of Figure 8, the receiver is essentially a voltage divider circuit.

But in DDR4 there is no voltage divider circuit at the receiver. It instead has an internal voltage reference which it uses to decide if the signal on data lines [DQ] is (0) or (1) . This voltage reference is calledVrefDQ. TheVrefDQcan be set using mode registers MR6 and it needs to be set correctly by the memory controller during theVrefDQ calibration phase.

At this point the initialization procedure is complete and the DRAMs are in (IDLE) state, but the memory isSTILLnot operational. The Controller and PHY have to perform a few more important steps before data can be reliably written-to or read-from the DRAM. This important phase is calledRead / Write Trainingor Memory Training or Initial Calibration) wherein the controller (or PHY)

This section is about the following circle in the state machine

Why is Read / Write Training Required?

Let’s take a closer look at our example system. The picture below shows how thedata signalsand (address / commmand signalsare connected between the ASIC / Processor and the DRAMs on the DIMM.

The DRAM is a fairly dumb device. Say you intend to do aWRITEoperation, during initialization you tell the DRAM what theCAS Write Latencyis by programming one of its Mode Registers (CWL is the time delay between the column address and data at the inputs of a DRAM), and you have to honor this timing parameter at all times. The memory controller needs to account for the board trace delays and the fly-by routing delays and launch Address and Data with the correct skew between them so that the Address and Data arrive at the memory with (CWL) latency between them.

For example, if you program the (CAS Write Latency) to9, once the ASIC / uP launches the Column Address, it will need to launch the different data bits at different times so that they all arrive at the DRAMs at a (CWL) of9.

Something similar to the above needs to be done forREADsas well. Since each DRAM on the DIMM is located at a different distance, when aREADis issued each DRAM on the DIMM will see theREADcommand at different times and subsequently the data from each DRAM arrives at the ASIC / Processor at different times. During Initial Calibration, the ASIC / Processor figures out what the delays from each of the DRAMs are and trains its internal circuitry accordingly so that it latches the data from the various DRAMs at the right moment.

For Read / Write Training, the Controller / PHY IPs typically offer a number of algorithms. The most common ones are:

All the above algorithms are performed by the memory controller and usually require you to only enable / disable each algorithm through a register and take action in case failures are reported. The following sections go into more detail about what the controller does when you enable each of these algorithms.

When writing to a DRAM an important timing parameter that cannot be violated is tDQSS. tDQSS is the position of the DataStrobe (DQS) relative to Clock (CK). tDQSS has to be within a tDQSS (MIN) and tDQSS (MAX) as defined in the spec. If tDQSS is violated and falls outside the range, wrong data may be written to the memory.

When you enable write-leveling in the controller, it does the following steps:

The figure below shows the write-leveling concept.

MPR (Multi Purpose Register) Pattern Write isn’t exactly a calibration algorithm. It is typically a step that is performed before Read Centering and Write Centering.

DDR4 DRAMs contain four 8-bit programmable registers called MPR registers that are used for DQ bit training (i.e., Read and Write Centering). MPR access mode is enabled by setting Mode Register MR3 [2]=1. When this mode is enabled READs and WRITEs issued to the DRAM are diverted to the Multi Purpose Register instead of the memory banks.

Similar to the read centering step, the purpose of write centering is to set the write delay for each data bit so that write data is centered on the corresponding write strobe edgeat the DRAM device.

From the above loop the PHY can determine for what write-delay range it reads back good data, and hence it can figure out the left and write edges of the write-data eye. Using this dat, a the DQ is centered to the DQS for writes.

In a device such as a network switch or router, there could be changes in Voltage and Temperature during its course of operation. To keep the signal integrity and data access reliable, some of the parameters that were trained during initialization and read / write training have to be re-run. Memory controller and PHY IPs typically provide the following two periodic calibration processes.

Enabling periodic calibration is optional because if you know your device will be deployed in stable temperature conditions, then the initial ZQ calibration and read / write training is sufficient.

Once this is done system is officially in IDLE and operational. You may need to enable periodic calibration depending upon the conditions in which your device is deployed. 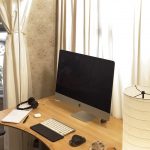