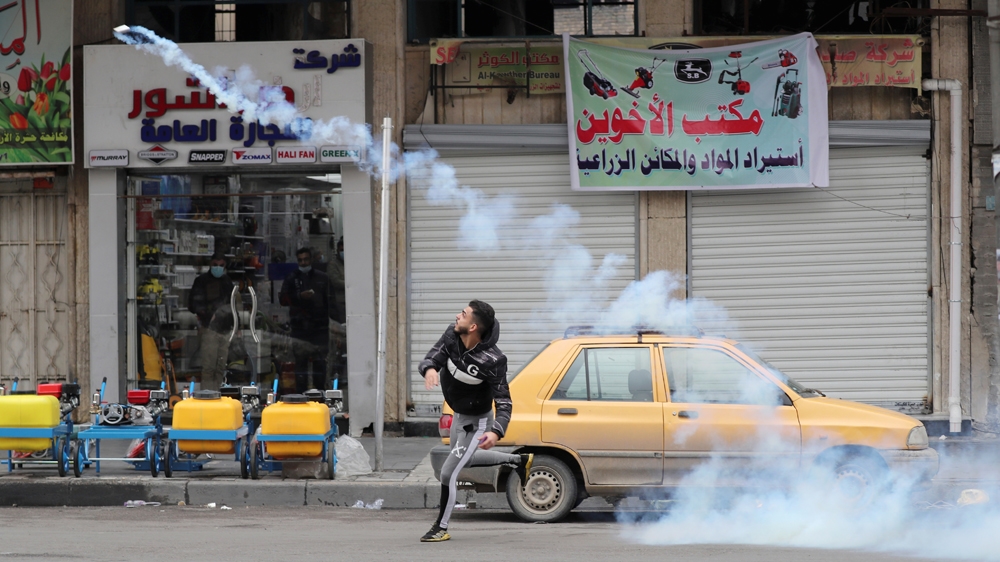 At about noon local time on Saturday, security forces fired tear gas and live bullets at Khilani Square, a few hundred meters away from Tahrir Square, medics said. According to several witnesses and medics, riot police also set fire to a number of protest tents on the nearby Sinak Bridge, sending a column of thick black smoke into the sky.

Inside the base targeted by Iranian missiles

There were no official reports of casualties, although medics confirmed that several protesters were wounded.

“I just arrived to Tahrir Square with my friends and everyone is telling us to go back because the situation is getting dangerous,” Qamar Imad, a 24 – year-old girl told Al Jazeera. “But we won’t leave Tahrir because it is ours. The sound of bullets will only strengthen our resolve.”

The developments came after people believed to be supporters of powerful Shia leader Moqtada al-Sadr began packing up their tents and leaving sit-ins in central Baghdad.

Al-Sadr, who was behind a mass protest on Friday in a different area in the capital, calling for the departure of US troops from Iraq, issued a statement on Twitter expressing his “disappointment” in anti- government protesters who had accused his rally of being pro-government.

“From now on I will not interfere in these [anti-government] protesters’ affairs neither in a negative nor positive way,” said al-Sadr, who also heads the biggest bloc in Parliament.

Many investigators saw his initial support for the anti-government protest movement – which has been calling for the removal of Iraqi ruling elite since October – as a form of protecting demonstrators from pro-Iran militias.

Some protesters in Tahrir Square blamed Saturday’s violence on al-Sadr’s decision to no longer be involved in the protest movement.

However, one al-Sadr supporter refuted this, saying although some of the Shia leader’s supporters had left Tahrir, the majority of his followers were still present.

“Al-Sadr did not order us in his statement to withdraw from the protests,” – year-old law student Durgham Hamid told Al Jazeera. “He was merely expressing his disappointment in those in Tahrir Square who have been criticizing him and his motives,” Hamid added.

“We are still here at the sit-ins, and we will not leave until our demands have been met, contrary to what other protesters have been saying,” he continued. “We are one people and stand together united.”

Separately, a statement from the Baghdad Operations Command said key squares and roads that had previously been a focal point for protesters were reopened for vehicle access.

The vital Mohammed al-Qasim highway, Tayaran Square and al-Nidhal street were all reopened, in addition to Ahrar Bridge, which had been partly occupied by protesters in a standoff with security forces.

However, protesters continue to occupy Jumhuriya and Sinak bridges, which lead to the heavily fortified Green Zone.

Meanwhile, tensions in Tahrir Square remained high, with people responding to it in different ways: A Man with his eyes shut was lip-syncing to a nationalistic song blaring out from his tent, just as a group of men carrying a crate full of Molotov cocktails ran past him. At one edge of the square, a group of medics huddled together, keeping a wary eye in the direction of Khilani, while next to them a young teenager was busy slicing up potatoes from an industrial-sized bag.

“We don’t know if they will attack us in another hour or at night or tomorrow,” one protester said, as he ducked out of his tent wearing a bulletproof vest and fastening on a helmet. “But we will defeat them, inshallah.”

Medical and police sources said two protesters were killed on Friday night in central Baghdad: One was shot by a live round in his neck and the other was hit with a military-grade tear gas canister. At least 63 other protesters were wounded.

In the southern city of Basra, riot police set fire to a protest encampment in the central square shortly after midnight on Saturday. 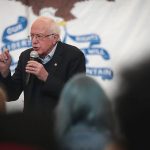 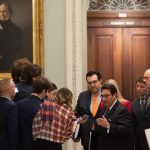