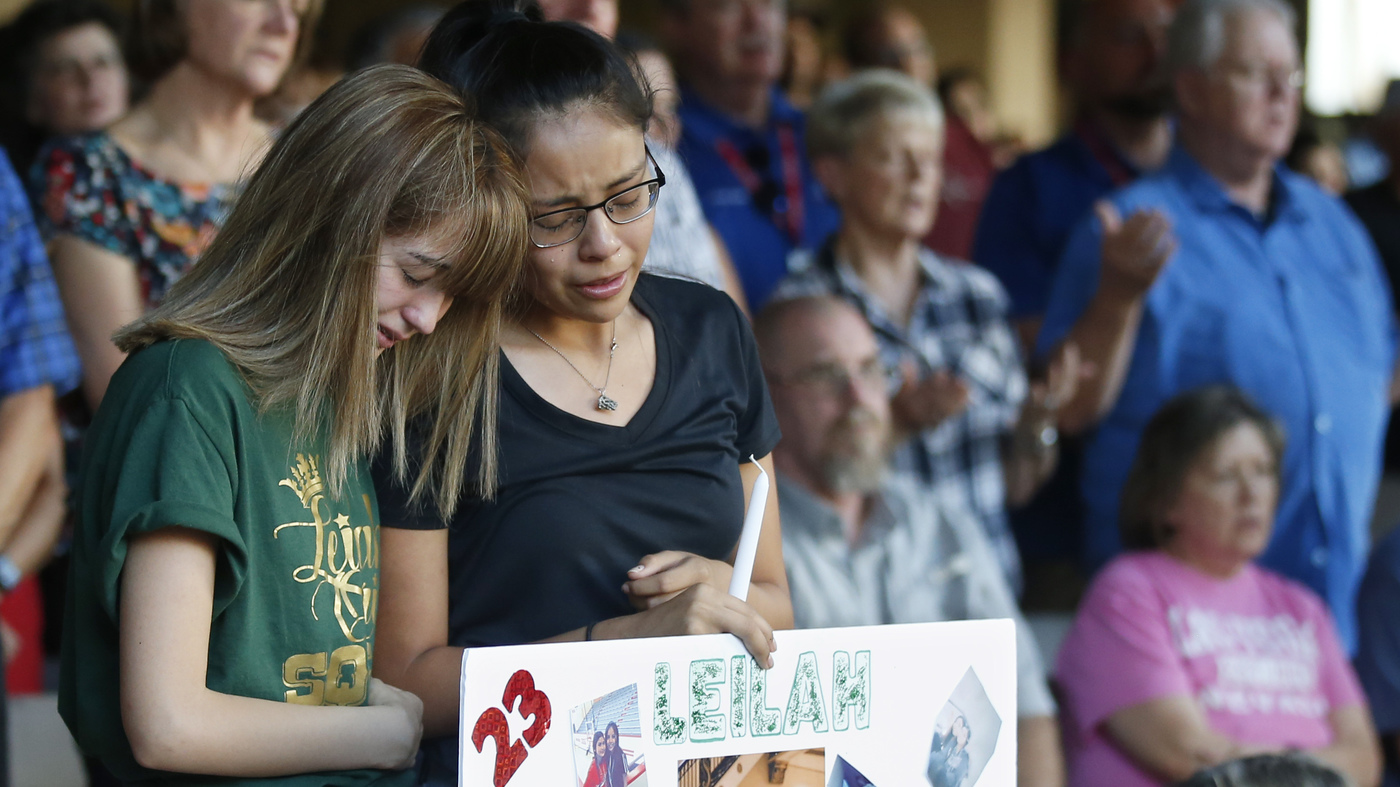 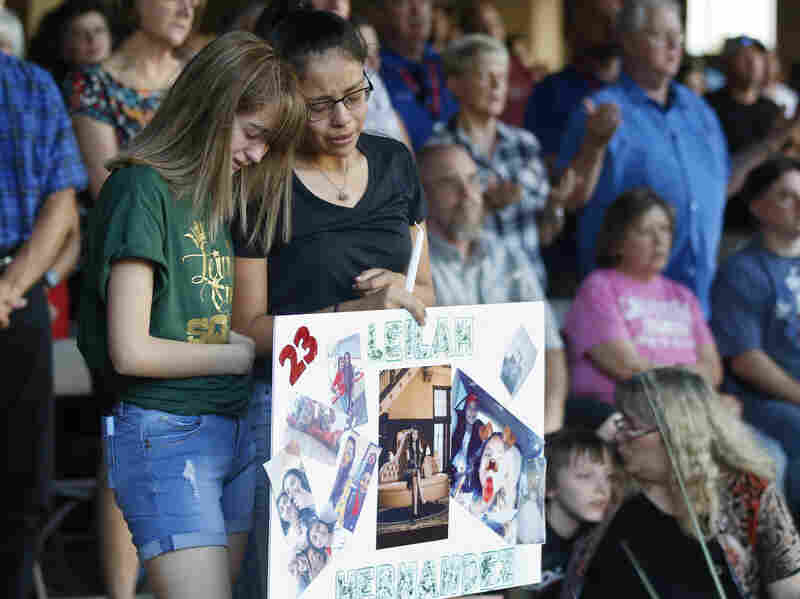 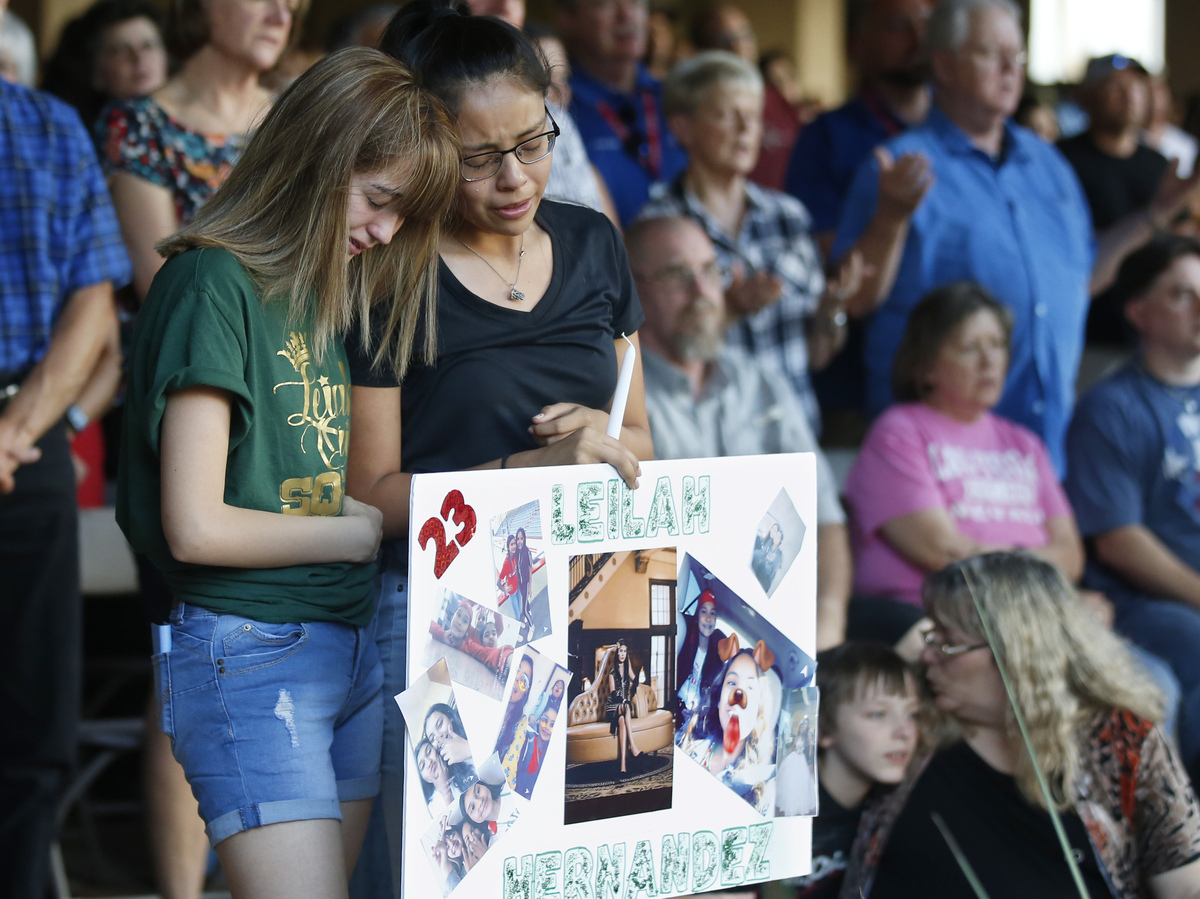 High School students Celeste Lujan, left, and Yasmin Natera mourn their friend, Leila Hernandez, one of the victims of the Saturday shooting in Odessa, Texas, at a memorial service on Sunday.

The shooter who opened fire after a routine traffic stop Saturday in West Texas, killing 7 people and injuring 22 more, has been identified.

Seth Aaron Ator, 36, of Odessa, had a prior misdemeanor arrest in 2001, the AP reports, but that would not have been a legal barrier to purchasing a firearm in the state of Texas. AsThe New York Timesfirst reported, Ator had been fired from his job just hours before he opened fire.

The identity of the shooter, who was killed by police, was released via Facebook after the Odessa Police Chief Michael Gerke explained why he would not name the shooter during a news conference. “I’m not going to give him any notoriety for what he did,” Gerke said.

Police haven’t yet released the identities of those killed in the shooting, who ranged in age from 15 to 57, but their names have trickled out in social media posts by employers and family members.

Rodolfo “Rudy” Arco, 57, who owned a trucking company, was among those killed. His sister Maria Arco,told the Arizona Republicthat her brother moved to Texas from Las Vegas in 2017 Followinga deadly shooting at a music festival, hoping it would be a safer place to live. “He felt that Odessa was the place to go,” Arco said.

, was killed when he heard gunshots outside his parents’ home to check it out, according to his sister, Eritizi Peregrino, The shooter was driving by the house and opened fire,reported The Washington Post.

Mary Granados, 29, was shot when the shooter stole her US Postal Service truck. Her twin sister, Rosie Granados,told ABC News,“she left so soon and she

Another victim who was killed, Leilah Hernandez, 15, was shot while walking out of a car dealership with her brother, according to family members. Her brother, Nathan, also shot, is hospitalized with injuries.A family member told The Washington Postthat the family was at the dealership on Saturday to pick up a truck that Nathan had been saving up for.

The injured also include three law enforcement officers and a 17 month old girl, who was hit in the mouth with shrapnel and is expected to recover. A GoFundMe account started for the toddler, Anderson Davis,has raised about $ 200, 000.

On the GoFundMe page, her mother wrote: “I ask you to continue praying for our hearts as we experience this, pray for complete healing of Anderson, pray for every other family in our same situation, or worse, today and pray for the shooters. to do this will be defeated by God and they will stop shooting. “

Ator used an AR – 15 – style rifle during the weekend shooting spree, which began when he was stopped by police for failing to use a turn signal.

Upon being pulled over, the AP reports, Ator pointed a rifle toward the rear window of his car. He then fired several shots toward the patrol car stopping him, striking a state trooper, according to Texas Department of Public Safety spokeswoman Katherine Cesinger.

) Ator then fled and began to fire shots as he drove through the Odessa and Midland area of ​​western Texas. The violent rampage ended when police killed the gunman outside a movie theater.

A large public vigil was held Sunday nighton the campus of the University of Texas of the Permian Basin, Marfa Pubic Radio reports, and began with a standing ovation for law enforcement and medical providers.

“Our first responders did an absolutely amazing job,” Odessa Mayor David Turner told the crowd. “You’re our heroes and we could not be more proud of you.”

“We’re still scared, we’re terrified, said Olivas, who attended the vigil service.” But we can’t let that get to us, so we came out tonight to show that fear will not get the best of us, “ 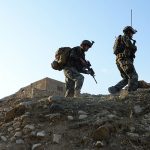 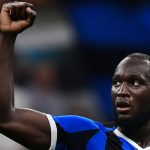