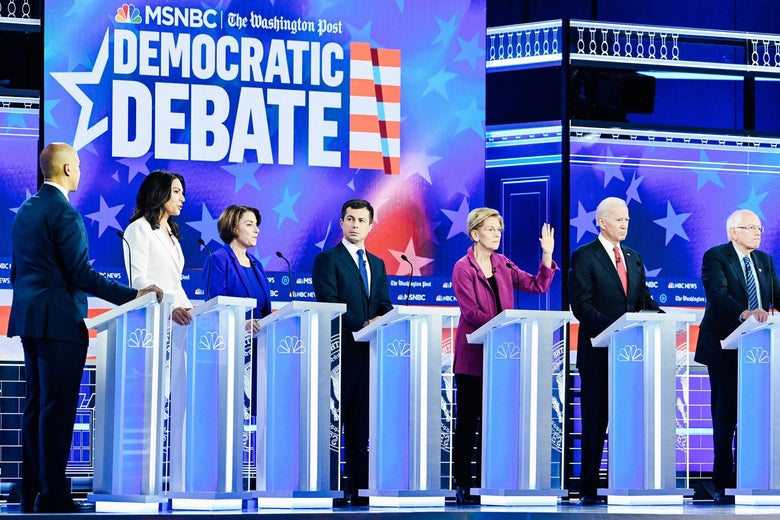 Wednesday night’sDemocratic presidential debatein Atlanta signaled a change in the 2020 election. The Democratic field is pivoting to the center.

Five months ago, in their first debate, the candidatesjockeyed for positions on the left. From free college to “Medicare for All” to the decriminalization of unauthorized border crossings, they scrambled to comply with progressive litmus tests. On Wednesday, Sen. Bernie Sanders of Vermont and billionaire Tom Steyer kept up this tone, denouncing various industries and demanding “bold changes.” But around them, the political climate has shifted. And the candidates are shifting with it.

The first thing that has changed is the House impeachment investigation. A few months ago, progressives were exasperated with House Speaker Nancy Pelosi for refusing to launch an impeachment of President Donald Trump over his conduct in the Russia scandal. Then the Ukraine story blew up, and Pelosi — having patiently cultivated the support of her whole caucus, including members from districts that voted for Trump — unleashed the power of a united Democratic majority against the president. The impeachment proceedings have galvanized respect for her as a model of practicality. In Wednesday’s debate, Vice President Joe Biden invoked Pelosi’s name in support of his view that health care should be expanded through a public option rather than “Medicare for All.” Another medium candidate, Sen. Amy Klobuchar of Minnesota, boasted that Pelosi beats Trump “every single day.”

Another change is this month’s Democratic gubernatorial victories in two deep-red states. In Kentucky, Democratic challenger Andy Beshear took 16 percent of Republican votes and beat GOP incumbent Matt Bevin by a ratio ofnearly 2 to 1among independents. In Louisiana, supporters of abortion rights bit the bullet and narrowly reelected Democratic Gov. John Bel Edwards, who hadsigned anti-abortion legislation. Klobuchar, in her closing remarks at the debate, cited Democratic wins in Kentucky andVirginiaas models. “Let’s get those independents and moderate Republicans who cannot stomach this guy anymore,” she said of Trump. “This is how we build a coalition” and “send Mitch McConnell packing,” she argued. “This is how we win.”

A third factor is the reshuffling of polls in Iowa and New Hampshire, the first two states on the primary calendar. Sanders and Sen. Elizabeth Warren, the leftists near the front of the pack, have stalled or slipped. Warren has suffered a backlash against her sweeping proposal to abolish private health insurance and replace it with “Medicare for All.” Meanwhile, Pete Buttigieg, the mayor of South Bend, Indiana, is rising. Buttigieg has played to independents, conservative Democrats, and disaffected Republicans. And other candidates have noticed that his strategy is working.

The average candidates have made some of these points before, but the mood onstage has changed, especially on healthCare.

Buttigieg speaks frankly about his Christianity. “My faith teaches me that salvation has to do with how I make myself useful to those who have been excluded,” he told the debate audience. He asked for support from “future former Republicans, who I know are watching this, disgusted by what is happening in their own party and in this country.” In a discussion of farming and its potential to mitigate climate change, he urged progressives to design and advocate environmental policies in a way “that recruits everybody to be part of the solution, including conservative communities where a lot of people have been made to feel that admitting climate science would mean acknowledging they’re part of the problem.”

On fiscal and economic questions, several candidates in the debate spoke up for prudence. Biden rejected “Medicare for All” as an unsustainable multitrillion-dollar extravagance. Klobuchar urged Democrats to be “fiscally responsible” and “honest… about what we can pay for.” She opposed “sending rich kids to college for free” and joked about politicians who promise everyone “a free car.” Klobuchar said that while she ‘d love to guarantee every parent six months of paid family leave, as other candidates have proposed, she’s proposing only three months, because it’s more financially and politically realistic.

The medium candidates have made some of these points before, but the mood onstage has changed, especially on health care. In early debates, Warren and other progressive candidates portrayed their centrist rivals as sellouts. Now the moderates are speaking with more confidence, and the leftists are choosing not to pick fights. Libertarian themes are creeping into the conversation. In this debate, Buttigieg and Klobuchar bristled at “kicking 149 million [people] off their health insurance ”and“ ordering people onto [“Medicare for All”] whether they want it or not. ”Biden accused single-payer advocates of trying to eliminate“ competition. ”Borrowing a line from Buttigieg, the former vice president argued that under his public option proposal, consumers “get to choose. I trust the American people to make a judgment [as to] what they believe is in their interest. ”

The most striking transformation is in Warren’s demeanor. When NBC’s Andrea Mitchell asked the senator about her self-image as a “fighter,” Warren retreated from populist brimstone to happy talk about “things that unite us.” “Doing a wealth tax is not about punishing anyone,” said Warren. It’s about giving everyone a chance, which “Republicans care about” too.

On health care, Warren shifted her emphasis away from “Medicare for All,” which hashurt herinPolls, and talked instead about protecting the Affordable Care Act, a message she had previously consigned to her moderate opponents. She said that as president, she would start by extending Medicare to people who didn’t have coverage and would postpone the question of a single-payer system. On abortion, she pitched a big tent. “Gov. John Bel Edwards in Louisiana is an anti-abortion governor who has signed abortion restrictions, ”MSNBC’s Rachel Maddow told Warren. “Is there room for him in the Democratic Party?” Warren defended abortion rights but stipulated: “I’m not here to try to drive anyone out of this party. I’m not here to try to build fences. ”

Sen. Cory Booker of New Jersey, who hadpositioned himself on the leftin previous debates, used this debate to move into the Buttigieg lane. Booker, too, has been a mayor — of Newark, a city far bigger than South Bend — and he has a record ofdefying progressive orthodoxies. Now he’sflaunting his apostasy. In Wednesday’s debate, Booker spoke of venture capital, refundable tax credits, and black Americans who “want to be entrepreneurs.” “I don’t agree with the wealth tax, the way that Elizabeth Warren puts it,” he said. “It’s cumbersome. It’s been tried by other nations. ”Booker continued,“ We ​​as Democrats have got to start talking not just about how we tax… but how to give more people opportunities to create wealth, to grow businesses, to have their American dream. ”

The new mood may not last. If a recession hits or polls show a resurgence of enthusiasm on the left, you can expect Warren, Booker, and other candidates, such as Sen. Kamala Harris of California, to adjust accordingly. But for now, the race to see who can be the most progressive Democrat has stalled, and the fight for the center is on.

Help us cover the central question: “Who counts?” Your Slate Plus membership will fund our work on voting, immigration, gerrymandering, and more through 2020. 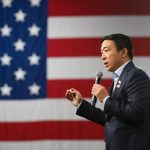 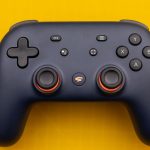