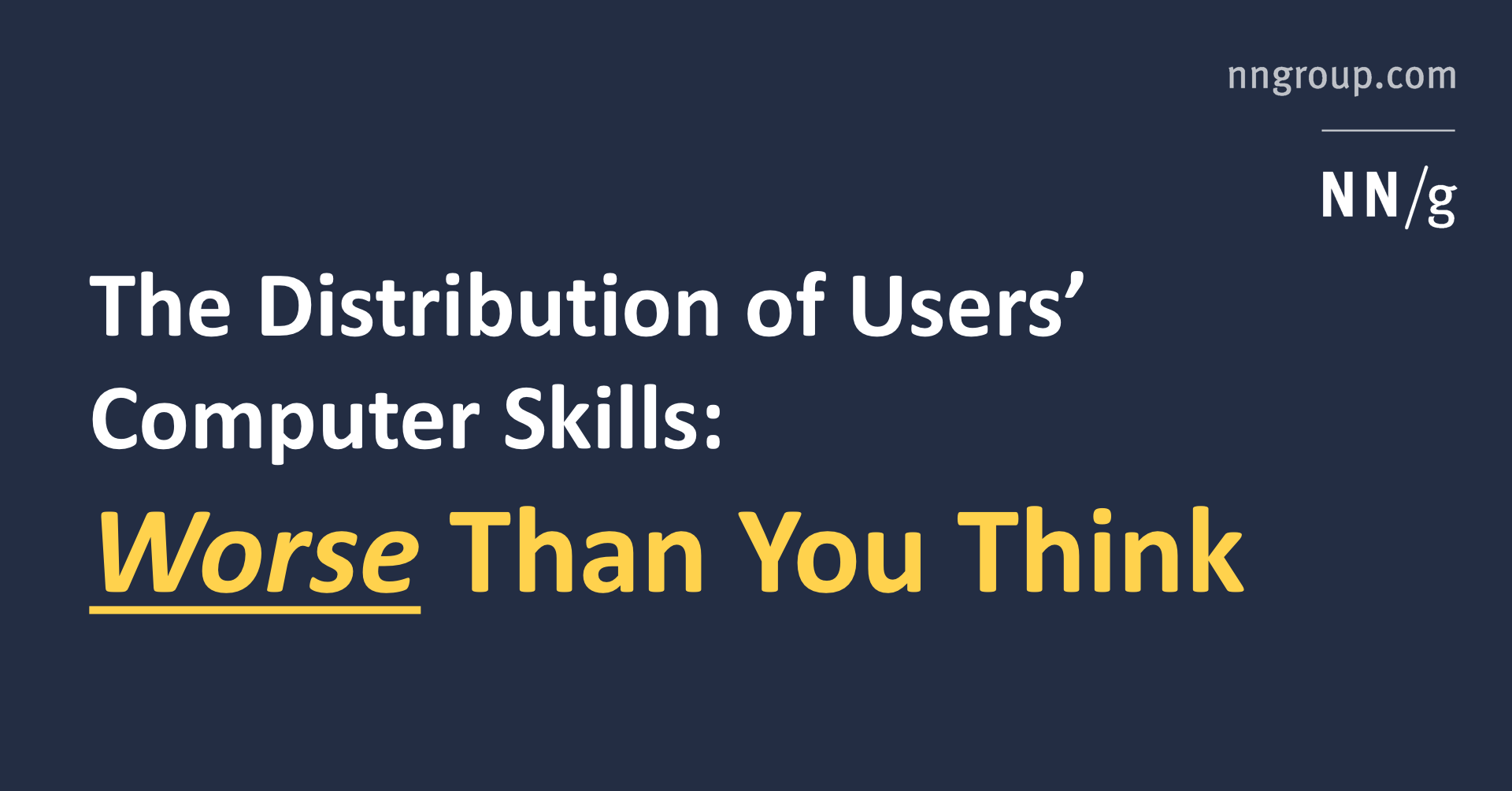 Summary:Across 33 rich countries, only 5% of the population has high computer-related abilities, and only a third of people can complete medium-complexity tasks.

One of usability’s most hard-earned lessons is thatyou are not the user. This is why it’s adisaster to guessat the users’ needs. Since designers are so different from the majority of the target audience, it’s not justirrelevantwhat you like or what you think is easy to use – it’s oftenmisleadingto rely on such personal preferences.

For sure, anybody who works on a design project will have a more accurate and detailedmental modelof the user interface than an outsider. If you target a broad consumer audience, you will also have a higher IQ than your average user, higherliteracy levels, and, most likely, you’ll be younger and experience lessage-driven degradationof your abilities than many of your users.

There is one more difference between you and the average user that’s even more damaging to your ability to predict what will be a good user interface: skills in using computers, the Internet, and technology in general. Anybody who’s on a web-design team or other user experience project is a veritable supergeek compared with the average population. This not just true for the developers. Even the less-technical team members are only “less-technical” in comparison with the engineers. They still have much stronger technical skills than most normal people.

A recent international research study allows us to quantify the difference between the broad population and the tech elite. The data was collected from 2011 – 2015 in 33 countries and was published in 2016 by the OECD (the Organization for Economic Co-operation and Development, a club of industrialized countries). In total,215, 942 peoplewere tested, with at least 5, 000 participants in most countries. The large scale of this study explains why it took a few years to publish the findings.

The research aimed to test the skills ofpeople aged 16 – 65, which is the age range referred to as “adults” in the report. While it’s true that people aged 66 are rare in the workforce (and thus of less interest to this workforce-targeted project), they are a major user group for many websites. Ourresearch with users older than 65has found many important usability issues for this age segment, who often has lower technology skills than younger users. Thus, in assessing the OECD findings, we should remember that the full user pool has lower skills than what the study data shows.

The OECD project looked at a broad range of job-related skills, but of most interest to us is the test of technology skills. For this part of the study, participants were asked to perform 14 computer-based tasks. Instead of using live websites, the participants attempted the tasks on simulated software on the test facilitator’s computer. This allowed the researchers to make sure that all participants were confronted with the same level of difficulty across the years and enabled controlled translations of the user interfaces into each country’s local language.

The tasks ranged in difficulty from very straightforward to somewhat complicated. One of theeasy taskswas to use the reply-all feature for an email program to send a response to three people. This was easy because the problem was explicit and involved a single step and a single constraint (the three people).

One of thedifficult taskswas to schedule a meeting room in a scheduling application, using information contained in several email messages. This was difficult because the problem statement was implicit and involved multiple steps and multiple constraints. It would have been much easier to solve the explicitly stated problem of booking room A for Wednesday at 3pm, but having to determine the ultimate need based on piecing together many pieces of info from across separate applications made this a difficult job for many users.

Even the supposedly difficult tasks don’t sound that hard and I certainly expect all of my readers to be able to perform them speedily and with a high degree of confidence. However, my entire point is that just becauseyoucan do it , it doesn’t mean that theaverage usercan do so as well.

The 4 Levels of Technology Proficiency

The researchers defined 4 levels of proficiency, based on the types of tasks users can complete successfully. For each level, here’s the percentage of the population (averaged across the OECD countries) who performed at that level, as well as the report’s definition of the ability of people within that level.

Being too polite to use a term like “level zero,” the OECD researchers refer to the lowest skill level as “below level 1.”

This is what people below level 1 can do: “Tasks are based on well-defined problems involving the use of only one function within a generic interface to meet one explicit criterion without any categorical or inferential reasoning , or transforming of information. Few steps are required and no sub-goal has to be generated. ”

An example of task at this level is “Delete this email message” in an email app.

This is what level-1 people can do: “Tasks typically require the use of widely available and familiar technology applications, such as email software or a web browser. There is little or no navigation required to access the information or commands required to solve the problem. The problem may be solved regardless of the respondent’s awareness and use of specific tools and functions (e.g. a sort function). The tasks involve few steps and a minimal number of operators. At the cognitive level, the respondent can readily infer the goal from the task statement; problem resolution requires the respondent to apply explicit criteria; and there are few monitoring demands (e.g. the respondent does not have to check whether he or she has used the appropriate procedure or made progress towards the solution). Identifying content and operators can be done through simple match. Only simple forms of reasoning, such as assigning items to categories, are required; there is no need to contrast or integrate information. ”

The reply-to-all task described above requires level-1 skills. Another example of level-1 task is “Find all emails from John Smith.”

This is what level-2 people can do: “At this level, tasks typically require the use of both generic and more specific technology applications. For instance, the respondent may have to make use of a novel online form. Some navigation across pages and applications is required to solve the problem. The use of tools (e.g. a sort function) can facilitate the resolution of the problem. The task may involve multiple steps and operators. The goal of the problem may have to be defined by the respondent, though the criteria to be met are explicit. There are higher monitoring demands. Some unexpected outcomes or impasses may appear. The task may require evaluating the relevance of a set of items to discard distractors. Some integration and inferential reasoning may be needed. ”

An example of level-2 task is “You want to find a sustainability-related document that was sent to you by John Smith in October last year.”

This is what this most-skilled group of people can do: “At this level, tasks typically require the use of both generic and more specific technology applications. Some navigation across pages and applications is required to solve the problem. The use of tools (e.g. a sort function) is required to make progress towards the solution. The task may involve multiple steps and operators. The goal of the problem may have to be defined by the respondent, and the criteria to be met may or may not be explicit. There are typically high monitoring demands. Unexpected outcomes and impasses are likely to occur. The task may require evaluating the relevance and reliability of information in order to discard distractors. Integration and inferential reasoning may be needed to a large extent. ”

The meeting room task described above requires level-3 skills. Another example of level-3 task is “You want to know what percentage of the emails sent by John Smith last month were about sustainability.”

Can’t Use Computers=26% of Adult Population

The numbers for the 4 skill levels don’t sum to 100% because a large proportion of the respondents never attempted the tasks, being unable to use computers. In total, across the OECD countries,26% of adults were Unable to use a computer.

That one quarter of the population can’t use a computer at all is the most serious element of theDigital divide. To a great extent, this problem is caused by computers still being much too complicated for many people.

You might say that you’re not designing for the whole of the OECD. You’re only designing for the rich and privileged country in which you most likely live. Fair enough, but the conclusions don’t change much, even when we look at the richest countries, as shown in the following chart (which is sorted in ascending order by the number of people at the highest skill level – ie, people like yourself ):

The main point I want to make is that you, dear reader, are almost certainly in the top category of computer skills, level 3. In the United States, only 5% of the population has these high computer skills. In Australia and the UK 6% are at this level; in Canada and across Northern Europe the number increases to 7%; Singapore and Japan are even better with a level-3 percentage of 8%.

Overall, people with strong technology skills make upa 5–8% sliver of their country population, whatever rich country they may be coming from. Go back to the OECD’s definition of the level-3 skills, quoted above. Consider defining your goals based on implicit criteria. Or overcoming unexpected outcomes and impasses while using the computer. Or evaluating the relevance and reliability of information in order to discard distractors. Do these sound like something you are capable of? Of course they do.

What’s important is to remember that95% of the populationin the United States (93% in Northern Europe; 92% in rich Asia)cannot do these things.

What does this simple fact tell us?You are not the user, unless you’re designing for an elite audience. (And even if you do target, say, aB2B audienceof nothing but engineers, they still know much less about your specific product than you do, so you’re still not the user.)

If you think something is easy, or that “surely people can do this simple thing on our website,” then you may very well be wrong.

What Most Users Can Do

If you want to target a broad consumer audience, it’s safest to assume that users’ skills are those specified for level 1. (But, remember that 14% of adults have even poorer skills, even disregarding the many who can’t use a computer at all.)

To recap, level 1 skills are:

Anything more complicated, and your design can only be used by people with skills at level 2 or 3, meaning that you’re down to serving 31% of the population in the United States, 35% in Japan and the UK, 37% in Canada and Singapore, and 38% in Northern Europe and Australia. Again, the international variations don’t matter much relative to the big-picture conclusion:keep it extremely simple, or two thirds of the population can’t use your design.