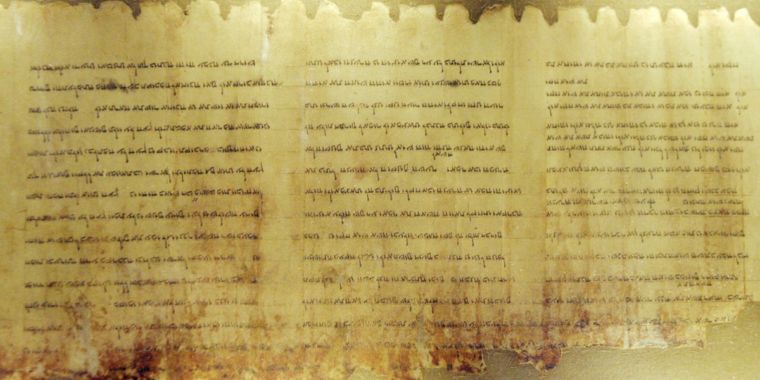 A team of MIT scientists studied a fragment of one of the famousDead Sea Scrollsand found the parchment has an unusual coating of sulfate salts. This may be one reason the scrolls were so well-preserved, but it also means the delicate parchments might be more vulnerable to small shifts in humidity than originally thought. The researchers described their work ina recent paperin Science Advances, noting that better understanding of the ancient techniques used to make parchment could also prove useful for spottingDead Sea Scroll forgeries.

These ancient Hebrew texts — roughly900 full and partial scrollsin all, stored in clay jars — were first discovered scattered in various caves near what was once the settlement ofQumran, just north of the Dead Sea, by Bedouin shepherds in 1946 – 1947 . Qumrun wasdestroyed by the Romans, circa 73 CE, and historians believe the scrolls were hidden in the caves by a sect called the Essenes to protect them from being destroyed. The natural limestone and conditions within the caves helped preserve the scrolls for millennia; they date back to between the third century BC and the first century CE.

Co-author Admir Masic, now at MIT, has a longstanding interest in the parchment used for the Dead Sea Scrolls (along withother ancient materials) dating back to his graduate studies in Italy. The scrolls have shown signs of degradation since they were first discovered and moved from the caves into museums, probably arising from early scholarly efforts to soften them up to make them easier to unroll. Scientists like Masic are keen to learn more about them in hopes of slowing or stopping that degradation.

“We are talking about ancient, two-thousand-year-old documents that cover a fantastic period where Christianity was born, “he said. “That means they are extremely valuable from a historical point of view. We need to think of ways to preserve them.”

TheTemple Scrollis the longest and most well-preserved of the Dead Sea Scrolls. The text appears to cover some version of material found in the Biblical books of Exodus and Deuteronomy, including plans for a Jewish temple, and rules regarding temple practices and sacrificial offerings. Parchment is typically made from animal skins, with the hair and fatty residues removed via enzymatic or similar treatments in ancient times. Then the skins were scraped clean and stretched across a frame to dry.

The Temple Scroll is unusual because the text appears on the flesh side of the parchment, rather than the hair side. From a materials standpoint, the Temple Scroll boasts a whiter surface than the other scrolls, and it is unusually thin — just 1 / 250 th of an inch (one-tenth of a millimeter) thick. Scholars have speculated that the parchment may have been split into two layers while being prepared. And the scroll has not been treated by preservationists, so it’s original composition is intact.

Naturally, the Temple Scroll drew Masic’s attention, and he was thrilled to receive permission to study a small fragment.

“It’s really rare to find an entire scroll,” said Masic. “In general, these manuscripts arrived to us as tiny fragments.” He and several graduate students analyzed the chemical composition of the fragment using a variety of techniques, including X-ray fluorescence, energy-dispersive spectroscopy, and Raman spectroscopy. This enabled them to map out the different chemical spectra across the fragment’s surface in great detail.

The presence of sulfur, sodium, and calcium in the evaporites on the parchment surface may be what gives the Temple Scroll its whiter color, and it may also have helped preserve the parchment. (These substances are called evaporites because the sulfate salts dissolve in water, and when the water evaporates, those minerals remain on the parchment.) Masic noted that the sulfate salts also includedGypsum, a calcium sulfate used in preparing canvases for painting, typically by mixing it with animal glue. It’s admittedly speculative, but he thinks that ancient parchment makers may have possibly adopted a similar approach to prepare the parchment for writing.

Most of the Dead Sea Scrolls are written on a hybrid of parchment and leather, usually based on the skins of cattle, sheep , or goats. There is evidence that, unlike parchment making in the Middle Ages (which was fairly uniform in terms of technique), the process in the early Middle East was much more varied. Some of the scroll parchments are tanned (part of the Eastern tradition) and some are untanned (a Western tradition).

A few other Dead Sea Scrolls also had a similar salt coating, suggesting that prepared parchments were being imported into the region, according to Masic. That’s significantly different from what was previously known about parchment-making practices in the area. “We were not aware there was so much communication between these civilizations, but this evidence indeed points toward exchange,” he said.

Furthermore, among the salts present were glauberite and thenardite, as well as gypsum, none of which are common to the region. “These evaporative salts are not typical for anything associated with this period and parchment making,” said Masic. “The fact that these evaporated salts look like they are not typical for the Dead Sea region — still to be confirmed with geologists — tells us they might have been imported from somewhere else, introducing new evidence of a vivid exchange of materials and technologies. “

The bad news: these salts are very sensitive to moisture in the air. They readily absorb it, which in turn can further degrade the parchment. Masic recommends that preservationists bear this in mind as they continue to work to preserve the Dead Sea Scrolls. He also thinks it might be possible to piece together the other scrolls from all those fragments, based on their unique chemical characteristics. 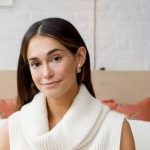