Drones are incredibly useful machines in the air, but getting them up and flying can be tricky, especially in crowded, windy, or emergency scenarios when speed is a factor. But a group of researchers from Caltech university and NASA’s Jet Propulsion Laboratory have come up with an elegant and oh-so-fun solution: fire the damn thing out of a cannon.

The engineers’ creation is called SQUID, short for Streamlined Quick Unfolding Investigation Drone, and it looks rather like one of those whistling Nerf balls. It’s under a foot long (27 centimeters), weighs 18 ounces (530 grams), and has four spring-loaded rotor arms that snap into place in less than a tenth of a second after the drone is launched.

To get SQUID airborne, the researchers fire it out of a modified pneumatic baseball pitching machine, which gives it an initial speed of around 35 miles per hour. In aresearch paper, the team note that SQUID’s rotors start running around 200 milliseconds after launch and that the quadcopter is “stable and hovering” in less than a second. That’s fast.

Launching a drone ballistically is definitely quicker than doing it from a standstill, but the other big advantage SQUID has is flexibility. A ballistic launch means SQUID can be fired from moving objects, as the researchers demonstrate by firing it from the back of a pick-up truck at 50 miles per hour.

This sort of launch scenario has all sorts of useful applications. Emergency responders and military units could launch drones to surveil the area without stopping, for example. Ballistic drones could also be good for space exploration, with “daughter rotorcraft” launched from landers and airships. “A rotorcraft greatly expands the data collection range of a rover, and allows access to sites that a rover would find impassible,” write the researchers.

As noted by coverage in(IEEE Spectrum) ****************************(where we spotted SQUID), this isn’t the first ballistically launched drone ever made. But earlier examples, like thisLOCUST unit from Raytheon, used fixed-wing instead of multi-rotor designs, which have a greater range and stability but are less maneuverable and can be harder to fly.

The SQUID design looks like a winner, though, and its creators say they are now exploring larger prototypes and “mission-specific versions for Mars and Titan.” 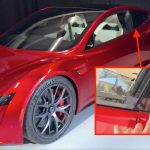