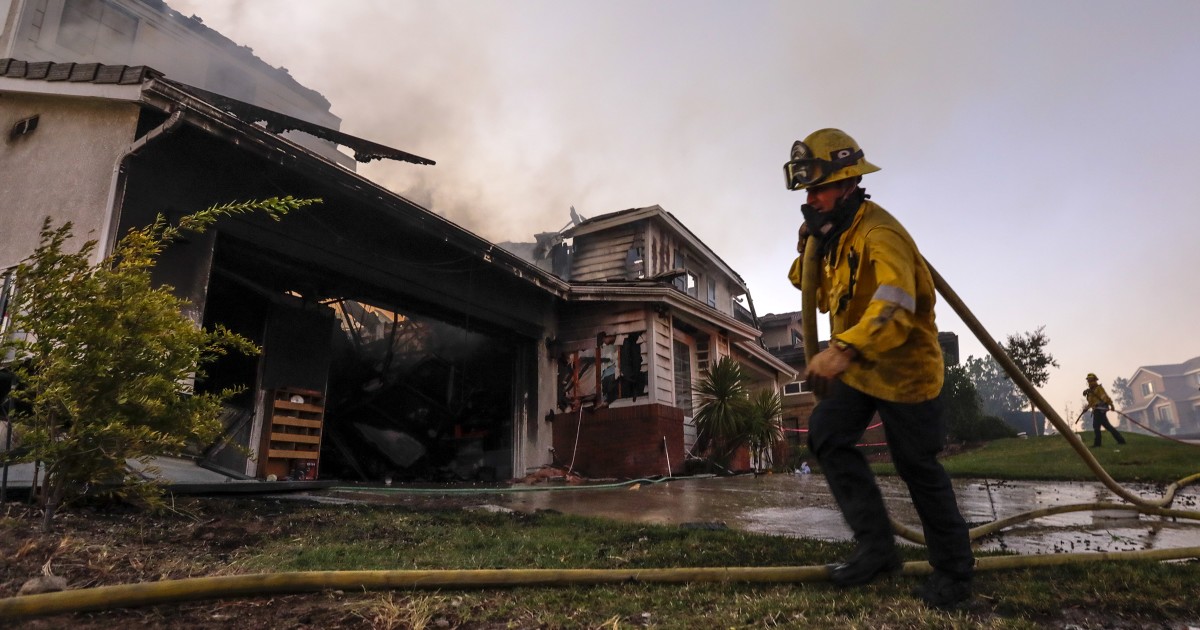 By Friday morning, the blaze had consumed nearly 4, 300 acres and was only 5% contained, according to fire officials. At least six homes have been destroyed and an unknown number damaged.

Shortly before 7 am, crews worked from a staging area along Arches Lane as a spot fire smoldered in brush on a hillside overlooked by homes. Embers whipped by winds gusting up to 50 mph had already ignited one residence, sending up plumes of smoke as firefighters tried to save the structure.

A dusting of fire retardant left some homes and a nearby hillside with a pink hue .

Santa Ana winds began picking up about 2: 30 am, allowing the fire to leapfrog across the 14 Freeway and make an aggressive march southwes t toward the Sand Canyon community as officials rushed to evacuate homes in the darkness.

Mandatory evacuations are in effect south of the 14 Freeway, east of Sand Canyon Road, north of Placerita Canyon Road and west of Agua Dulce Canyon Road.

Roughly 40, 000 people have been evacuated in the blaze, and about 15, 000 homes are currently threatened. Cornell urged residents to heed evacuation warnings and leave quickly when ordered.

“We know people want to stay, but really that does nothing but hurt you and us,” he said. “We need the water pressure, and we need the roads clear to be able to get in there.”

The Tick fire broke out shortly before 1: 45 pm Thursday along Tick Canyon Road and quickly began burning out of control. No injuries have been reported, and the cause of the fire is under investigation.

Roughly 600 firefighters were on the scene Friday attempting to defend homes and build containment lines around the blaze amid challenging red flag conditions that are expected to linger late into the night.

The National Weather Service is expecting temperatures in the mid – 80 s, single-digit humidity and northeast winds gusting up to 65 mph in the fire area.

About 3 am Friday, the weather service office in Oxnard reported northeast winds of 33 mph in the area of ​​the fire with gusts of 54 mph. Winds will be strongest Friday in the mountains, the weather service said, warning “very rapid fire spread and extreme fire behavior [are] possible with new ignitions.”

“The more it dries out, the faster it’ll run if the fire really gets going,” Cornell said. He said strike teams were very strategic in their approach and were watching the fire’s behavior “meticulously, second by second and minute by minute.”

Severe fire and wind conditions prompted Gov. Gavin Newsom to declare a state of emergency for Los Angeles and for Sonoma County, which is grappling with themassive Kincade fire. Los Angeles County Supervisor Janice Hahn also declared a local emergency for the county on Friday.

There are signs of the Tick fire’s impact all across the Santa Clarita Valley.

A trailer full of evacuated llamas sat in a Target parking lot, and several restaurants were transformed into unofficial shelters. At a Santa Clarita Starbucks on Friday morning, a woman rested her head on a wooden table and a man, whose electricity had been cut off, watched a live stream of the fire from a TV news chopper on his phone.

Five miles away, on the other side of Interstate 5, evacuees were starting to trickle into West Ranch High School, where the Red Cross had set up a shelter.

Leticia Fetterly and her 19 – year-old daughter, Danielle, sat on cots facing each other and recounting the past 24 hours. Sometime around 1: 30 PM Thursday, Fetterly yelled into the bathroom of her Canyon Country home.

“Danielle,” she said, “you might want to take really quick shower. I think we need to evacuate. ”

A pillar of pitch-black smoke was a few miles away, and once they spotted a water drop nearby, they knew it was time to leave . Fetterly packed up her mortgage papers and the negatives of photos she’d taken of her three children over the years. Her daughter, a college student, grabbed her Polaroids, some school work and her laptop.

Fetterly said she’d evacuated once before, about a decade ago, but this time felt more urgent. Some of her neighbors thought she was overreacting on Thursday, she said, but her mind was racing with thoughts of the 85 people who died last year in the Camp fire, theDeadliest blaze in California history.

For her part, she couldn’t stop thinking about the victims and their last few seconds – that moment, she said, when they realized it was too late. Her daughter, who was sitting cross-legged on her cot, rubbed her hands on a U-shaped travel pillow resting in her lap and winced.

“I’ve been really worried , ”She said, adding that she’d had a bad feeling in her stomach since Wednesday night, when she’d noticed an all-to-familiar combination of heat and strong winds.

In the Sierra Hills neighborhood, residents watched late Thursday evening as firefighters from the Santa Monica Fire Department hosed down the garden of a home. Flames that sprang from windblown embers burned down a greenhouse and play area of ​​the home near the hillside that surrounds the cul-de-sac on Kenroy Avenue. Neighbors gathered on the street keeping an eye out for any flare-ups on the hillside, passing the time with cups of wine and beer.

At the Sierra Heights mobile home park, many residents appeared to have evacuated. Wind chimes and crackling fire nearby pierced the silence as flames glowed on the hills to the east and in the canyons below.

On a hilltop less than a quarter-mile to the southwest, the remnants of one residence were still burning early Friday morning. A white sign at the home’s entryway reading “La Granja” (The Farm) had fallen from its post. It appeared the fire had come quickly, forcing the home’s occupants to rush to safety. Two bags of clothing were left in the driveway, still in perfect condition.

Those who fled from their homes in the early morning hours Friday described a scene of chaos as authorities charged into their neighborhoods on the eastern edge of Santa Clarita to rouse them as the fire roared closer.

Mary Lindsey isn’t sure what awakened her in the middle of the night. Maybe it was the hum of helicopters, she said, or perhaps just the providence of God. The power in her neighborhood had been shut off since 11 am Thursday, but at 2: 30 am Friday she noticed light filtering in through the bedroom curtains.

“That’s not right,” she thought, grabbing a flashlight. Outside, a sheriff’s deputy cruising by noticed her light in the window and flicked on his sirens. The deputy ran toward her home, banging on the door.

“It’s a mandatory evacuation!” He shouted. “Have you gotten any alerts?”

“No,” she said, looking up the street. “All of these houses have people in them.”

Because the power was out and it was pitch black on her street, she said she thinks the authorities thought everyone had already left the area. Lindsey and her husband, Charles, had been ready to go for hours, but no warning ever came – no Amber Alert-style message, no phone call, no patrol cars with bullhorns.

Those who evacuated were left to wonder through the night whether their homes would still be standing by sunrise.

Before 6 a.m. Friday, the parking lot at the College of the Canyons campus in Valencia, where another shelter had been established, was packed with cars and RVS. It was dark and quiet, except for the sound of cats whining from their cages. Some evacuees slept in their cars, others stared into the glow of their cellphones, desperate for updates.

Lee Mentzer, 78, stood in the parking lot with his grandson. They both felt like they were in a daze.

“We live in Canyon Country,” Mentzer said, closing his eyes. “Hopefully we still live there.” 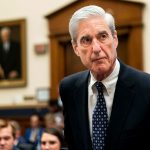