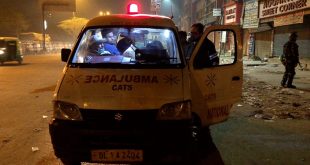 How The Clashes Over CAA Unfolded In Northeast Delhi – NDTV News, Ndtv.com


A CCTV footage emerged on Thursday of lawyers purportedly chasing a woman police officer during the violence at Tis Hazari court on the weekend even as lawyers at Delhi’s district court continued their strike for the fourth consecutive day.

The CCTV footage showed the officer being chased, allegedly by some lawyers, while her support staff either shielded her or tried to push back the persons chasing her.

Some lawyers, too, were seen trying to protect the woman officer even as a fire could be seen raging in the background in the visuals.

While no separate FIR was filed on the attack on the woman officer, the Delhi Police said it would include additional legal sections in the FIR that has already been registered against the lawyers for their alleged role in the Tis Hazari violence.

“The Crime Branch’s special investigation team is analizing all CCTV footage of Saturday’s violence as part of investigations. They will record the statements of all officers who were part of mob control that day. Based on their probe, whatever new offences are detected, legal sections pertaining to those will be added in the existing FIR against lawyers. This will include the statement that will be made by the woman officer in question, ”Delhi Police spokesperson Anil Mittal said.

Meanwhile, the striking lawyers softened their stand to allow litigants to enter the court premises and even offered flowers and biscuits to a few of them.

However, what remained constant at all the courts on Thursday was the safe distance that the police maintained.

With the police mostly staying put outside the premises, lawyers were seen frisking litigants visiting the Tis Hazari court on Thursday. Litigants have been appearing for their hearings in the court even as their lawyers remain on strike.

However, at the Patiala House court, located in the high security Lutyens’ Delhi, the baggage scanners remained unmanned even as policemen were seen standing outside the court’s lock-up area. Visitors were seen entering the premises unchecked.

But no incident of violence was reported at any of these courts Thursday even as different factions of lawyers protested in small groups at the different courts.

At the Tis Hazari court, where the first and major clash between the lawyers and police took place on Saturday, advocates set up a few tents to carry on with their strike. At one of those tents, lawyers sat on a hunger strike to press their demand for the arrest of the policeman who had allegedly opened fire, injuring two lawyers.

In the Saket court, where lawyers had allegedly attacked policemen and civilians on Monday, some lawyers were seen giving flowers and biscuits to visitors. They left the court gates open, for the first time since Monday.

The situation at the Rohini Court, too, remained peaceful, a day after two lawyers allegedly attempted suicide there. Rakesh Chahar, secretary of Rohini Bar Association, said a peaceful protest was organized at the court, but litigants were allowed to enter the premises.

Earlier in the day, the Bar Council of India (BCI) sent a letter to the Bar Council of Delhi (BCD), requesting the coordination committee of all Bar associations of Delhi to give names of their representatives for a joint meeting, so that the same could be forwarded to the L-G’s office, with a copy to the BCI.

The BCI said it is the statutory duty of the BCD to take care of the situation and ensure that the five-day long agitation / abstinence is called off. Manan Kumar Mishra, BCI chairman, said, “We have already written to the BCD and it’s their responsibility to see that the strike is called off.”