President Donald Trump knew about a bombshell whistleblower complaint that exposed his pressure campaign against Ukraine when he decided to release a withheld military aid package to Kyiv,The New York Times reported.

White House lawyers told the president in late August about the complaint, which blew the whistle on Trump’s July 25 phone call with Ukrainian President Volodymyr Zelenskiy and spurred House Democrats to launch an impeachment inquiry, two people familiar with the matter told the Times. The aid was delivered to Ukraine in mid-September.

The lawyers explained to Trump that they were trying to determine whether they were legally required to hand the complaint over to Congress, the Times reported Tuesday.

Trump, who denies any wrongdoing, has said his July 25 conversation was a “perfect” call, in which he asked Zelenskiy to “look into” former Vice President Joe Biden and his son Hunter, as well as a debunked conspiracy theory that Ukraine framed Russia for hacking Democrats’ emails in 2016.

Democrats are investigating whether Trump abused his power by pressuring Ukraine to announce the investigations into his political rivals while hundreds of millions of dollars in military aid was being delayed without clear explanation.

Republicans have defended Trump throughout the impeachment proceedings in the House by noting that the aid was eventually released after initially being held up. Some witnesses in the probe testified before the House Intelligence Committee that they were told Trump himself ordered the aid be frozen.

But the Times’ report sheds new light on why Trump may have suddenly reversed course on the holdup of Ukraine aid, which was crucial to that country’s ongoing war with Russia.

The impeachment inquiry, meanwhile,is entering its next phase in the House Judiciary Committee, where Trump will have the option to participate for the first time.

Read the full report from The New York Times. 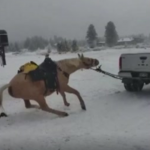