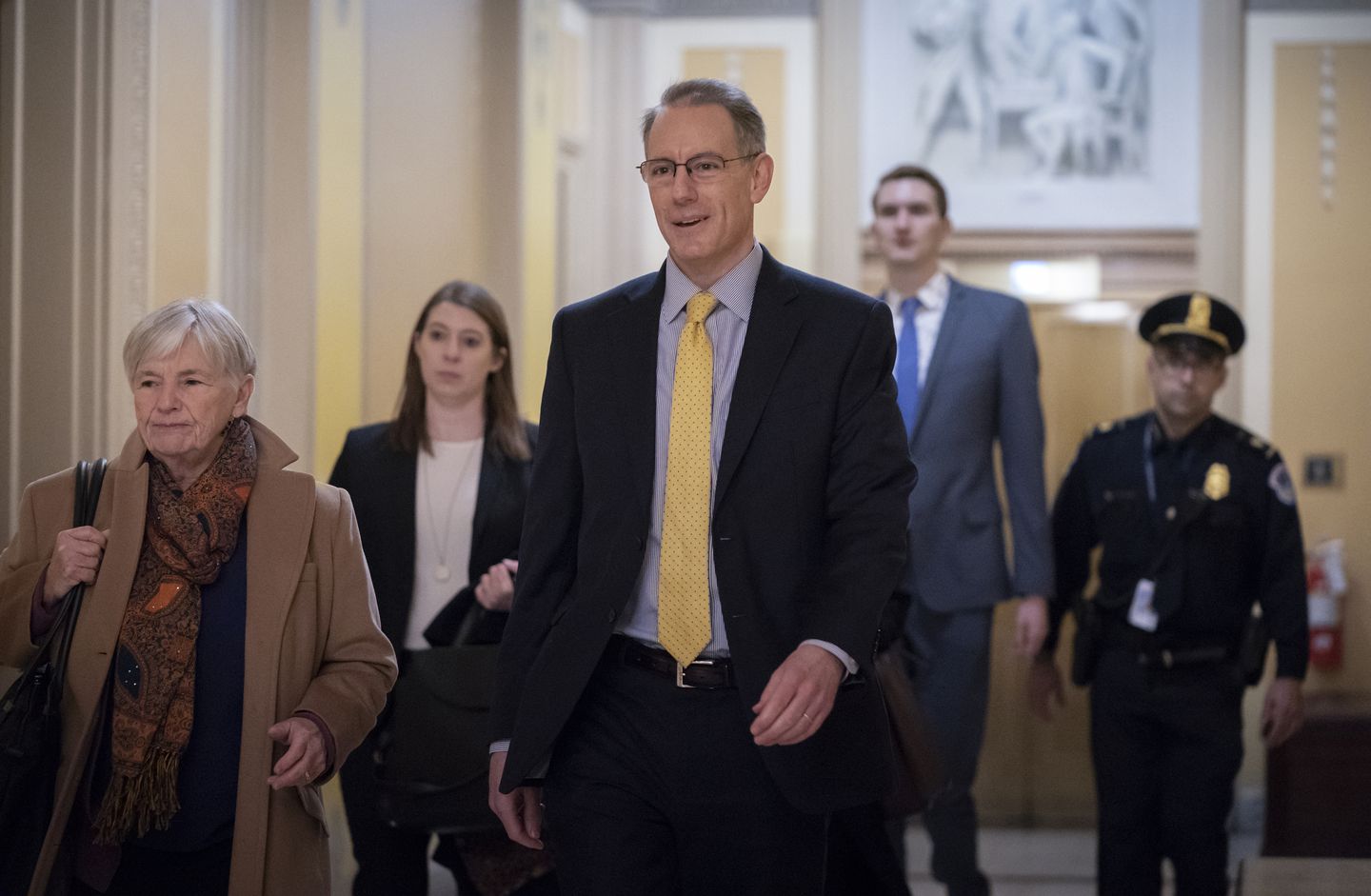 Two officials at the White House Office of Management and Budget recently resigned in part over concerns about the holdup on Ukraine aid, a career employee of the agency told impeachment investigators, according to a transcript of his testimony released Tuesday.

Mark Sandy, the only OMB official to testify in the impeachment inquiry, did not name the employees in question. He said one worked in the OMB legal division and described that person as having a “dissenting opinion” about how the security assistance to Ukraine could be held up in light of the Impoundment Control Act, which limits the ability of the executive branch to change spending decisions already made by Congress.

Sandy, the agency’s deputy associate director for national security programs , testified on Nov. 16, and his remarks revealed some of the White House’s internal maneuvers when it came to blocking the money . Other White House officials, including Sandy’s superiors at the budget office who are political appointees, have defied congressional subpoenas to participate in the House Democrats’ impeachment inquiry.

Sandy was asked specifically about whether the official who worked in OMB’s legal office quit “at least in part because of their concerns or frustrations about the hold on Ukraine security assistance.” Sandy replied, “Yes, in terms of that process, in part.”

He said the other official, who resigned in September, “expressed some frustrations about not understanding the reason for the hold.”

The release of Sandy’s testimony came as House Democrats on Tuesday took steps forward in their impeachment inquiry into President Trump’s actions, with the judiciary panel scheduling its first hearing for December 4 and the budget panel releasing a report alleging the White House broke the law by withholding money from Ukraine.

The moves show the impeachment process quickly advancing beyond the hearings held by the House Intelligence Committee this month to proceedings that could lead to a formal vote on impeachment.

House Judiciary Committee Chairman Jerrold Nadler (D., NY), in a 13 – page letter to Trump, gave the president until December 1 to decide whether he planned to participate in that panel’s impeachment hearings. Nadler’s committee has the power to draft the articles of impeachment against Trump.

House Democrats in September began an impeachment inquiry into Trump’s actions during the summer, alleging that he withheld security funding for Ukraine and a White House meeting for that country president until the new leader, Volodymyr Zelensky, agreed to announce investigations into Trump’s US political opponents.

Current and former government officials have testified that they were alarmed about the White House’s decision to withhold the money, with some saying they feared that Trump was trying to pressure the Ukrainian government for his own political gain. Trump has denied wrongdoing and decried the investigation.

Sandy’s testimony is the first public confirmation that the dispute at the OMB over handling of the Ukraine aid became so intense that it contributed to resignations from the agency . In the transcript released Tuesday, Sandy said that he himself voiced concerns within the agency about whether holding up the Ukraine aid comported with the law.

“I just made a general reference to the Impoundment Control Act … and said that we would have to assess that with the advice of counsel before proceeding, ”Sandy said in describing a conversation he had with a political appointee at the agency who was his superior.

Ultimately that political appointee, Mike Duffey, took over the process of signing off on the documents that held up the Ukraine money. Sandy told impeachment investigators that until that time, Duffey had voiced no interest in the process of approving apportionments.

Sandy said his own staff was “surprised and they were concerned” about the apportionment authority being removed from him, and that he was not aware of such a step happening before.

He testified that Duffey’s stated explanation was he wanted to learn more about the “accounts and the programs” at OMB , but that Sandy thought there were better ways to go about doing this. But, “I took him at his word,” Sandy said.

Duffey defied a congressional subpoena to testify in the impeachment inquiry.

In announcing the Dec. 4 hearing, House Judiciary Committee ChairmanJerrold Nadler (DN.Y.) sent a letterto Trump and asked whether he or his lawyer planned to attend and question witnesses.

“We expect to discuss the constitutional framework through which the House may analyze the evidence gathered in the present inquiry,” Nadler wrote. “We will also discuss whether your alleged actions warrant the House’s exercising its authority to adopt articles of impeachment.”

Last week, Trump said he would seriously consider responding to written questions as part of the inquiry, but he has not mentioned the idea since.

Trump on Tuesday gave mixed signals about whether the White House might participate in the process. In Twitter posts, he wrote, “I would actually like people to testify,” but he suggested he wasn’t allowing his top current and former aides to testify because it would set a dangerous precedent for future presidents.

“It is a Democrat Scam that is going nowhere but, future Presidents should in no way be compromised,” Trumpwrote. “What has happened to me should never happen to another President!”

Democrats have tried to establish a timeline of events that show the aid money appropriated for Ukraine was withheld around the same time Trump was increasing pressure on Zelensky to investigate former vice president Joe Biden and his son Hunter. The House Budget Committee on Tuesday alleged in a report that OMB engaged in a “pattern of abuse” of its authority and the law in holding up the security assistance to Ukraine.

In findings based on documents turned over by the OMB, the Democratic-led House Budget Committee cites unusual steps the agency took over the summer as it moved to hold up nearly $ 400 million of State Department and Pentagon assistance for Ukraine that had been approved by Congress, including several discussed by Sandy in his testimony to congressional investigators.

These included putting Duffey in charge of signing off on spending in late July, after Sandy raised concerns, and delaying funds in a way that limited agencies’ ability to spend congressionally approved spending by the end of the fiscal year.

The latter move would be a violation of the Impoundment Control Act of 1974, which was passed in response to actions by President Richa rd M. Nixon. This was the law that Sandy told investigators an OMB legal division officer had voiced concerns about when resigning. Sandy said the official, whom he did not name, did not agree with the position of OMB’s general counsel that withholding the money was legal.

On the morning of July 25, Trump and Zelensky spoke by phone, and Trump mentioned the possibility of Zelensky’s working with the US government on an investigation into Biden and his son, according to a transcript released by the White House. Later that day, at 6: 44 pm, according to the Budget Committee report, an OMB career official signed a document formally withholding $ 250 million in Pentagon funds intended for Ukraine.

After this point , political appointees took over the process of approving the funds from career officials. The frozen aid was not released until Sept. 12, after House lawmakers were notified of a whistleblower report regarding the Trump-Zelensky call.

The committee’s report also said the OMB released only a portion of the documents the committee sought in a detailed request to the agency two months ago from committee Chairman John Yarmuth (D-Ky.) And House Appropriations Chairwoman Nita M. Lowey (DN.Y.).

“After careful review of the materials provided to the committees, the Chairs have become more concerned that the apportionment process has been abused to undermine Congress’s constitutional power of the purse, ”the committee report says.

The OMB declined to provide an on-the-record response to the committee’s findings, or to Sandy’s testimony.

The White House’s pressure campaign against Ukraine was led in part by Rudolph W. Giuliani, an outside lawyer for Trump. In an interview broadcast Tuesday by former Fox News Channel host Bill O’Reilly, Trump said he didn’t direct Giuliani to go to Ukraine to pressure Ukranian’s leaders to investigate Biden. He suggested that Giuliani might have tried to go to Ukraine on behalf of other clients, not himself.

“I know he was going to go to Ukraine and I think he canceled a trip,” Trump said in the interview. “But, you know, Rudy has other clients other than me. I’m one person.”

The House of Representatives is controlled by Democrats, and they could impeach Trump with a majority vote. That action is equivalent to indicting the president for a crime. The process would then move to the Senate, which is controlled by Republicans, and they would then hold a trial on the House’s charges. office would require the approval of two-thirds of senators, a threshold few observers think is likely to be met. 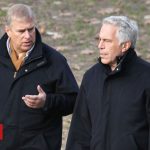