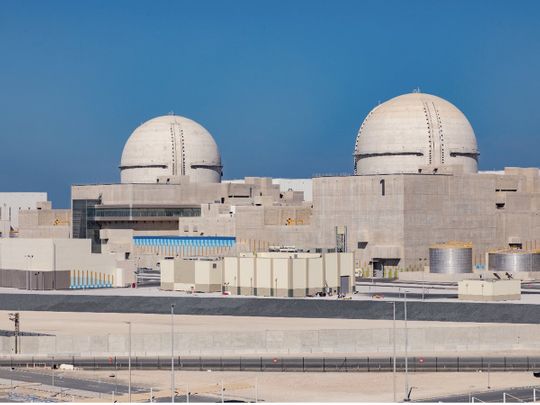 Abu Dhabi: The UAE has today (August 1) become the first country in the Arab World to begin peaceful nuclear energy production. The successful opening of UAE’s Barakah nuclear plant was announced on Twitter by His Highness Sheikh Mohammed Bin Rashid Al Maktoum, Vice-President and Prime Minister of the UAE and Ruler of Dubai.

The successful opening of UAE’s Barakah nuclear plant was announced on Twitter by His Highness Sheikh Mohammed Bin Rashid Al Maktoum, Vice-President and Prime Minister of the UAE and Ruler of Dubai.

The tweet signals that Barakah Nuclear Power Plant in Abu Dhabi emirate’s Al Dhafra area has successfully begun operations, after completing a nearly five-month commissioning phase. It will be operated and maintained by the Nawah Energy Company, a subsidiary of the Emirates Nuclear Energy Corporation.

“The goal is to operate four nuclear power stations that will provide a quarter of the state’s need for electricity in a safe, reliable and emission-free way. The UAE splits the atom, and wants to explore the galaxy. This is a message to the world that the Arabs are able to resume their scientific path, and compete with the rest of the great nations,”, Sheikh Mohammed tweeted.

“In this phase, the operations team will increase the reactor power gradually until it reaches 15 per cent in order to be connected to the UAE power grid during the upcoming months, delivering the first megawatts of clean electricity,” the Abu Dhabi Media Office said.

“Today is a truly historic moment for the UAE. It is the culmination of more than a decade of vision, strategic planning and robust programme management. Despite the recent global challenges, our team has demonstrated outstanding resilience and commitment to the safe delivery of Unit 1. We are now another step closer to achieving our goal of supplying up to a quarter of our nation’s electricity needs and powering its future growth with safe, reliable and emissions-free electricity,” said Mohamed Ibrahim Al Hammadi, chief executive officer at Enec.

“We are grateful to the leadership for their continuous support in making this remarkable achievement happen, along with the support of our UAE stakeholders and Korean partners, and congratulate everyone involved in the programme on this landmark occasion,” Al Hammadi said.

The official also expressed his pride at the Emirati contribution to the programme.

“I am especially proud of our talented Emirati engineers and nuclear professionals who contributed to the construction of Unit 1, as well as the UAE National Senior Reactor Operators and Reactor Operators who have been certified to safely operate the plant, alongside our international experts, to ensure the safe and sustainable operations of the unit,” he said.

“Since issuing the Operating License in February 2020 for Unit 1 of Barakah Nuclear Power Plant, the Federal Authority for Nuclear Regulation (FANR) has continued its regulatory oversight: starting with fuel loading, testing until reaching the first criticality phase, which is a normal operating condition in the reactor, where energy is produced using nuclear fuel. FANR confirms that Nawah, the operator, has met all regulatory requirements to initiate this phase. The milestone follows extensive oversight, including regular inspection, to ensure the safety and security of the nuclear power plant,” FANR announced in a statement sent today (August 1).

“Following issuing operating license until the first criticality phase, FANR’s oversight activities included regular inspection using its resident inspectors as well as deploying inspectors to oversee the fuel loading and the testing processes. FANR is also continuously verifying the emergency preparedness and response system as well as monitoring the environment through independent monitoring stations around the nuclear power plant and its Environmental Laboratory,” the statement added.

Following the first criticality phase, FANR will continue conducting its regulatory oversight and inspection during this phase and subsequent phases, including power grid synchronisation and full commercial operation, in order to ensure the safety and security of the nuclear power plant as part of its mission to protect the public, workers and environment.

The start-up of the plant marks the point at which nuclear fission occurs, as part of the process towards generating clean electricity. This is a historic milestone for the UAE, as ENEC works to deliver on the vision set by the the country’s Leadership in 2008 to deliver a new form of clean, abundant electricity for the nation.

Hereon, Nawah’s qualified and certified team of UAE Emirati and international expert nuclear operators will gradually increase the nuclear fission and start to produce electricity, prior to connecting to the UAE grid. The Federal Authority for Nuclear Energy (FANR)will continue to regulate the country’s nuclear sector.The Unit 1 reactor at the Barakah Nuclear Energy Plant, had received its operating license on February 17, and subsequently entered the commission phase. The license application for Unit 1 was submitted by the Emirates Nuclear Energy Corporation (ENEC) in 2015 on behalf of its subsidiary Nawah, which will be the official operator of the site.

Unit 1 reactor makes up the first of four reactors at the Barakah nuclear site. When fully completed, all four reactors will contribute to 25 per cent of the UAE’s electricity generation and will also reduce C02 emissions by 21 million tonnes annually.

The approving license in February for the Unit 1 reactor itself capped a 12-year journey since the UAE officially launched its nuclear programme back in 2008. To issue the approval for the 14,000-page operating license application, FANR conducted more than 185 inspections and requested 2,000 additional pieces of information related to the reactor’s design, safety and other issues related to regulatory requirements.

“The UAE nuclear energy programme, including the nuclear law and regulations, conforms to the safety standards of the International Atomic Energy Agency (IAEA) and the international best practices. The UAE [has] received, in the past decade, 11 major peer review missions from the IAEA to review and assess various aspects from nuclear infrastructure, the legal and regulatory system, nuclear safety… and nonproliferation,” Hamad Al Kaabi, UAE Permanent Representative to the International Atomic Energy Agency (IAEA) had announced when the Unit 1 received its operating license.

The UAE is a party to over 13 international conventions such as the IAEA’s Safeguard Agreement and its Additional Protocol and the Convention on Nuclear Safety and other instruments.

• July 2020: ENEC successfully completes the construction of Unit 2, and hands it over to Nawah Energy Company, ENEC’s operating and maintenance subsidiary..

1.4 million cubic yards of concrete used to build the reactors

5,600 megawatts of electricity to be produced at Barakah Nuclear Power Plant

21 million tonnes of CO2 emissions to be avoided