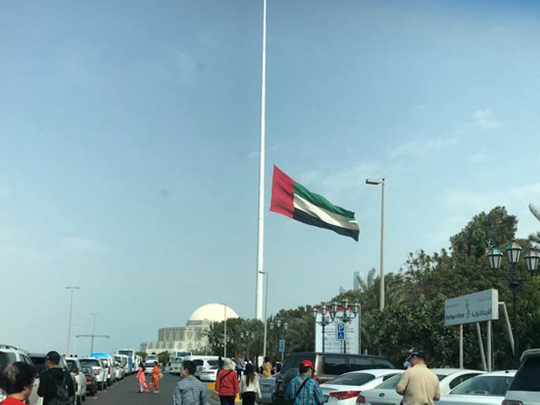 Sultan Qaboos Bin Said of Oman, the Arab world’s longest-serving ruler, passed way late on Friday night and was laid to rest on Saturday morning in the capital Muscat.

On Saturday, the UAE has declared three days of mourning and flags to be flown half mast, according to the official news agency WAM.

His Highness Sheikh Mohammed Bin Rashid Al Maktoum, Vice President and Prime Minister of the UAE and Ruler of Dubai, mourned the death of Sultan Qaboos, whom he described as the “Sultan of loyalty, love, and wisdom.”

His Highness Sheikh Mohamed Bin Zayed stated: “Oman and the Arab and Islamic nations lost a wise leader, and a great historical stature. May God have mercy on Sultan Qaboos, a dear brother and companion of Sheikh Zayed’s path. They left us, sharing their wisdom and sincerity, the advancement of their people and the service of their patriarchs. We offer condolences to his family and people, and we ask God to bless him with his mercy and graciousness.”

‘His wisdom alive in our hearts forever’

Today we have lost a leader dedicated to serving his people and their renaissance. To Arab and Muslim nations, Sultan Qaboos was an icon — but his wisdom will remain forever alive in our hearts. May Allah have mercy on his soul and grant solace & patience to the people of Oman.

Previous 100% Free – How To Make A WordPress Website Within One Hour 2020
Next 100% Free – Clickbank Success: The Affiliate Marketing Paycheck Secrets