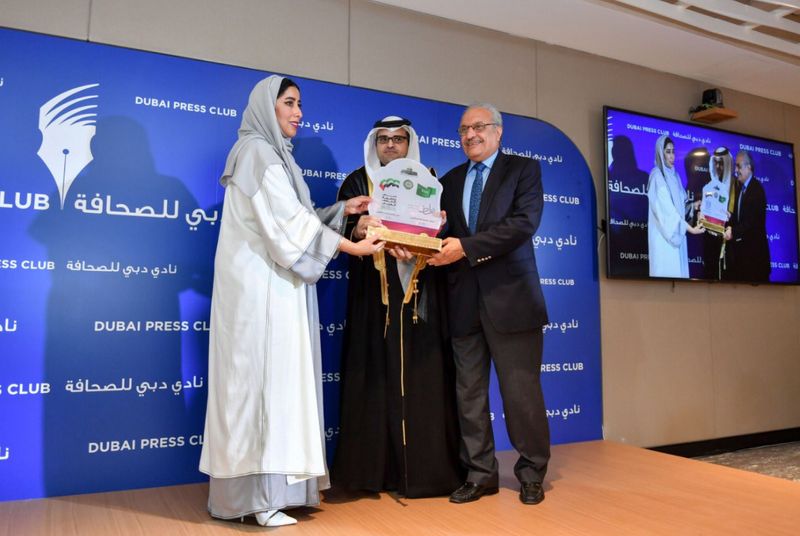 Dubai: The UAE’s leadership is committed to supporting the growth of media both in the government and private sectors, His Highness Shaikh Mohammad bin Rashid Al Maktoum, Vice-President and Prime Minister of the UAE and Ruler of Dubai, said on Wednesday.

Speaking at the 20th anniversary celebrations of the Dubai Press Club, which included a ceremony in which Dubai took over the title of the ‘Capital of Arab Media 2020,’ Shaikh Mohammad said the media sector is a vital focus for the nation.

Shaikh Mohammad expressed his appreciation for the contributions made by the Dubai Press Club, its major local and regional initiatives, and training and educational programmes. He stressed on the need to expand opportunities for young media professionals by imparting the skillsets they need to excel.

“The media touches the lives of people on a daily basis. It influences them and is influenced by them. It is important to create the best environment to foster the development of exceptional media expertise as part of our broader aim of meeting the aspirations of the people.”

“We have always focused on taking proactive initiatives to advance our development; 20 years ago, we realised there was a gap in this part of the world for an organisation that can bring together media professionals and offer them a platform to discuss the reality and future of their profession. The initiative to establish Dubai Press Club sought to bridge this gap and encourage industry leaders in the country and beyond to engage in a dialogue on developing the media sector and contribute to transforming the region,” he said.

Mona Al Marri, Vice Chairman and Managing Director of Dubai Media Council and President of Dubai Press Club, received the trophy for the ‘Capital of Arab Media for 2020’ from Dr. Khalid bin Abdulqader Al Ghamdi, General Supervisor of Foreign Media at the Saudi Ministry of Media.

The title, announced by the Council of Arab Information Ministers, recognises Dubai’s leadership in the media industry and its contributions to the transformation of the region’s media. Taking over from Riyadh, Dubai will hold the title for all of 2020.

Expressing Dubai’s pride in being selected for the title, Shaikh Ahmed said: “We have earned the trust and confidence of regional and international media institutions through our open-approach and firm belief in the significance of the media.”

“Today, Dubai has firmly established itself as a hub for Arab and global media. The success of our partnership with the media comes as a result of mutual respect and a shared desire to build the foundations for a better tomorrow.”

He further stressed that the Dubai Media Council will work to make 2020 a landmark year in the history of Arab media, noting that the next period will witness more collaborations with the Secretariat General of the Arab League.

Shaikh Ahmed paid tribute to all those who have made significant contributions to the growth of Arab media, stressing that the media is one of the sectors that powerfully touches people’s lives and contributes to shaping their future.

Later, Shaikh Mohammad and other leaders also visited the new headquarters of the Government of Dubai Media Office (GDMO) located in Offices 2, One Central at the Dubai World Trade Centre.

Shaikh Mohammad also visited the new headquarters of Brand Dubai and the Dubai Press Club, where he was briefed about their 2020 initiatives, which seek to build on Dubai’s status as the Capital of Arab Media for 2020.