Uber Technologies is this weekend fighting a desperate battle to avoid losing its London license after fresh concerns were raised by regulators about the company’s ability to identify its drivers.

Sky News has learnt that Transport for London (TfL) is contemplating the “nuclear option” of denying a permit for Uber to operate in the capital for the second time in little more than two years.

Sources said on Saturday that a formal decision, which will be announced on Monday beforea two-month probationary licenseexpires, remained in the balance but said TfL was now “actively considering” a ban.

They cautioned, however, that Uber – the world’s biggest ride-hailing app – could yet secure another short-term extension to its private-hire operator’s license following further talks this weekend.

The regulator has raised additional issues with the company as recently as this week related to driver identification procedures that it had yet to satisfactorily address, they added.

A source said that discussions had intensified this week in order to try to allay TfL’s remaining concerns.

The regulator will make a final decision on Monday.

In a statement, TfL said it was “considering Uber’s application and no decision has been made”.

Uber, whose operations in London have been vehemently opposed for years by the Licensed Taxi Drivers ‘Association (LTDA), has an army of 45, 000 drivers in the city.

The frantic nature of the discussions implies that it has “zero” chance of being granted a long-term license, according to one observer.

“Denying a license altogether is the nuclear option but it is certainly under active consideration, “said the person.

The loss of its license – one of its most valuable anywhere in the world – would leave the company facing the prospect of another protracted legal battle to salvage its presence in the capital.

It would also deliver a bombshell to investors in the New York-listed Uber who have seen its shares perform dismally since its f lotation in May. ***********

Uber, which is run by the former Expedia boss Dara Khosrowshahi, has sought to diversify into food delivery and financial services amid a continued struggle to make its core ride-hailing business profitable on a standalone basis.

If it does see its latest application to TfL blocked, Uber would have a short window within which it could lodge an appeal, and it would almost certainly be allowed to continue operating while any appeal process took place. )

Among the conditions outlined by the transport watchdog in September was that Uber met revised standards relating to ride-sharing, drivers’ insurance and identification checks.

The technology giant wasoriginally banned for not being “fit and proper” in September 2017, when Sadiq Khan, the mayor of London, said: “I want companies that innovate, harbor new technologies, I want disruptive technology coming to London but you’ve got to play by the rules “.

Mr Khan is due to stand for re-election next May, making any decision to ban Uber – which counts 3.5 million Londoners as customers – a potentially politically risky call.

The original ban on Uber was overturned by the courts in June 2018, when it washanded a 15 – month license.

It was granted subject to more than a dozen conditions including the appointment of three independent directors to the board of Uber London Limited (ULL) and a requirement for the company to produce an independently verified assurance report to TfL every six months.

The presiding magistrate highlighted Uber’s refusal to accept blame for shortcomings in conducting criminal record checks on drivers and delays to informing regulators about data breaches as reasons for continuing concerns about its oversight.

ULL had sparked outrage with its use of a software program called Greybull, which prevented regulators from obtaining full access to data stored on the Uber app.

It has also run into trouble over its failure to report criminal incidents involving its drivers to the Metropolitan Police.

Uber’s efforts to improve governance resulted in the appointment ofLaurel Powers-Freeling, a former banker, as its UK chairman.

Since its original ban, TfL has awarded licenses of varying durations to rival operators including Bolt, Ola and Viavan, although none has been for as long as five years – the maximum term possible under the TfL framework.

The legal battle over its London license is not the only courtroom fight that Uber has been involved in in Britain.

Earlier this year, it survived a High Court challenge brought by a group of black cab drivers who alleged that Ms Arbuthnot’s ruling in favor of a temporary license had been “tainted by actual or apparent bias” because of financial connections between her husband and Uber.

Uber’s bid to prolong it s presence in London comes amid a period of turbulence for rival Addison Lee, the capital’s biggest minicab operator.

Addison Lee has been put up for sale but is likely to undergo a debt-for-equity swap that will leave it under the control of its lenders.

In an effort to improve its reputation, Uber has launched an environmentally focused campaign called its Clean Air Plan, which levies a 15 p-per-ride fee on every trip booked through its app in London.

The company has said it expects the move to raise more than £ 200 m “to support drivers transitioning to electric vehicles over the next few years “.

It has also unveiled a number of additional safety features in the UK, including a tool on its app that allows users to flag discriminatory behavior they experience during

Uber’s New York Stock Exchange-listed shares closed on Friday at $ 29. 56, more than a third below the $ 45 at which they were priced in May’s flotation.

The company now has a market capitalisation of just over $ 50 bn, compared to a valuation of up to $ 120 bn being touted by bankers last year. 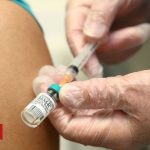 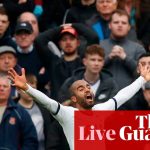