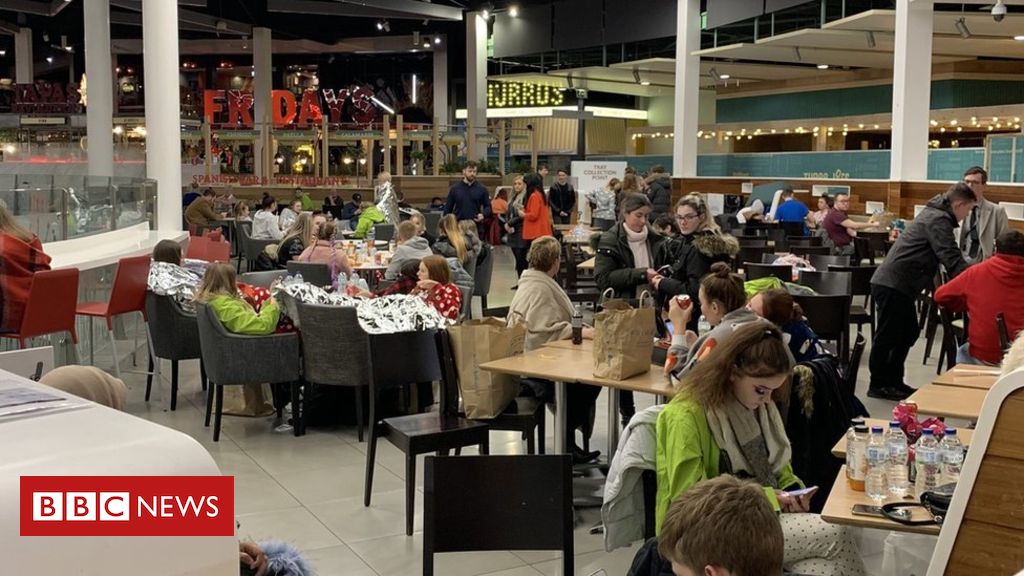 People bedded down on benches and chairs in the Meadowhall center, while others tried throughout the night to get home

Elsewhere, in Rotherham firefighters rescued people by boat who were stranded in the Parkgate center.

People are being told to evacuate their homes in the villages of Old Kirk Sandall and Sandal Grove near Doncaster after the River Don burst its banks.

There are three severe flood warnings – meaning a danger to life – in place along the River Don.

More than 100 flood warnings remain in place,mostly in the north of England, with the rain causing serious disruption to roads and

Earlier on Thursday,35 homes in Mansfield, Nottinghamshire, were evacuatedafter a mudslide caused by torrential rain.

In Sheffield, hundreds of people – including those attending the Christmas Live event, which was cancelled – were kept inside Meadowhall center by police after the surrounding streets were flooded.

The center later reopened but many people chose to stay overnight, after being unable to get

Disney Store worker Jodie Whelan, 23, stayed at the center, where she said staff were handing out free drinks and trying to arrange taxis.

She said she traveled in for her shift by bus but said getting back was “an absolute no-go”.

“I’m feeling very tired,” she added. “A bit fed up but trying to make the best out of an awful situation. The atmosphere is very weird but communal.

“Some people got a bit rowdy and it was upsetting seeing some older people and people with babies or children, but thankfully we are all warm and safe.”

Another member of staff, Luke Turner, who works at a restaurant, said he was Unable to drive home after his shift so bedded down in the stockroom where he said he could use “aprons” as a pillow.

“I’ve got options, I could have got a taxi home but that still leaves me having to get a taxi back to work tomorrow,” Mr Turner, from Chesterfield, said.

“I had an offer from my higher management that if I could get a hotel room for the night … but unfortunately all the hotel rooms around me are full. “

“There’s people in suits sleeping, one guy in a Tesco uniform,” he added.

Meanwhile Charlotte Lowther -Fuller, 18, from Grimsby said she was unable to get to a taxi as the roads and junction were cordoned off.

“It was impossible for him to get us,” she said, adding: “I am feeling quite tired, drained and cold from the whole situation and just want to get home as I have college to go to in the morning. “

Sixth-form student Rosie De Roeck, 16, from Kirkby-in-Ashfield, spent around nine hours in the center with her friend before her mum managed to rescue her at shortly before 01: 00 GMT.

It was “horrible” and “quite scary”, she said, adding that Primark stayed open late, with her and many others buying pyjamas after getting wet in the rain.

She said coffee chain Starbucks gave out free cookies and a man who was also stranded shared a box of crisps he had bought.

College student Saskia Hazelwood, 17, from Doncaster, who was stranded with three friends when trains were cancelled, said people were “stressed, tired and bored” in the center.

“My dad tried to drive but he literally couldn’t get in,” she said. “He tried going up all the back roads, up streets the other way, he couldn’t get in.”

At shortly after midnight, Sheffield City Council declared a major incident, saying there was ” some water “coming over the top of the River Don’s defences, but it was not yet a breach.

According to the forecast fromthe Environment Agency, the River Don at Doncaster is predicted to reach its highest recorded level later on Friday.

Meadowhall shopping center said it would open as normal on Friday, providing the Environment Agency lifts its flood warning as forecasted.

“Whilst the extreme weather conditions persist, the center remains dry and secure,” it said in a statement.

South Yorkshire Police worked through the night to move up to 100 people who were stranded in the Parkgate Shopping Park in Rotherham.

Rotherham Borough Council urged residents to stay at home and not leave unless told to by emergency services.

“Roads across the region have been adversely affected and we would advise people not to travel unless it is absolutely necessary, “the councilsaid in

Earlier on Thursday, South Yorkshire Police said there were “significant issues” in Doncaster, with Bentley, Toll Bar and Scawthorpe the worst affected areas.

The weather has also caused train services to be cancelled.

Northern Rail issueda “do not travel” warning to commuters using three routes, saying flooding had closed the lines between Sheffield and Gainsborough, Sheffield and Lincoln and Hebden Bridge and Manchester Victoria.

Fears about rising river levels on the River Ryton in Worksop, Nottinghamshire, has led to a number of homes being evacuated in Central Avenue.

Were you in the shopping center? Or have you been affected in other ways by the flooding? Share your experiences by emailing[email protected]. 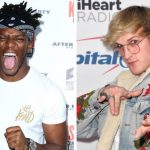 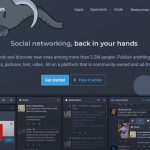