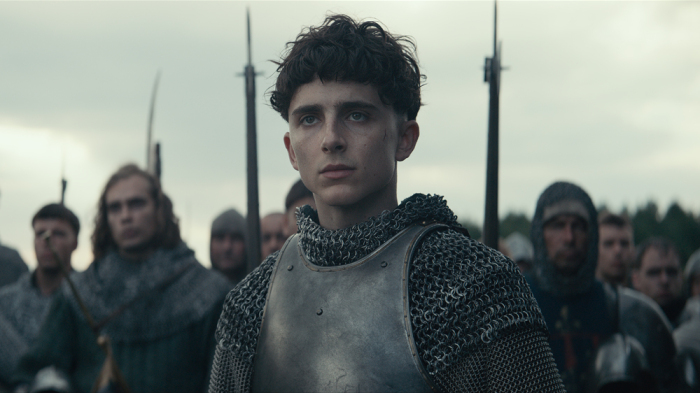 Timothée Chalamet brings a dash of star charisma to the young Henry V in an engrossing royal-court historical drama with a Shakespeare vibe.

The older he gets (he’s now 23), the more Timothée Chalemet looks like a svelte, neurasthenic-rock-star version of Daniel Day-Lewis. In “The King,” a sprawling but intimate royal-court medieval pageant movie, he plays Hal, the Prince of Wales, who will become Henry V. In the early scenes, when Hal is a dissolute party boy, drinking and carousing in the slovenly district of Eastcheap, Chalamet, tall and rail-thin, with milky skin, dark doe eyes, and hair parted down the middle and chopped at the shoulders, parades around like the world swooniest scarecrow pinup.

Handsome is the wrong word for this actor. He’s beautiful, and the camera drinks him in. “The King” gives Chalamet one of the choicest roles he’s had, but when you take an actor who looks like this and cast him as a young king, it’s not just about how fascinating the role is – the film is capturing the elevation of his stardom. And Timothée Chalemet, I predict, could be the biggest movie star of his generation. As he demonstrates in “The King,” he’sgotit – not just the talent (though he’s a superb actor), but the ability to fix an audience with his stare, so that even when he’s doing nothing much at all, what he’s looking at or thinking about becomes the story the movie is telling.

The wordkingstill evokes the image of a man of the world, usually of some years, wearing a crown. The notion of casting a boy wonder like Chalamet as Henry V feels like a novelty. The reality, of course, is that in the early 15 th century, when “The King” is set, people didn’t live very long. Henry V died when he was 35, and the notion that kings and queens – the leaders of the unfree world – could be just, you know,kids in their twentieswho hadn’t figured out career plans and got put in charge of the family empire was rather common.

Where “The King,” directed by David Michôd (“Animal Kingdom”), takes advantage of that reality is that instead of treating Chalamet’s to-the-royal-court-born monarch as an iconic presence, the film recognizes that royalty itself was a conceit, at times a fraud.Someonehad to wear those jewels and costumes and pretend to be a nation’s all-mighty ruler by holy decree. But really, beneath the finery, it was just a bunch of ordinary people, and that’s the psychological story “The King” tells: what it feels like to assume the throne when everything you’re going to have to do,, for you, unprecedented.

Hal, the wayward prince, is toxically estranged from his father, played by Ben Mendelsohn as a glowering hippie tyrant addicted to war. The older Henry wants Scotland and Wales to knuckle under, but his quest for dominion is nearing its end, because he’s dying. He summons Hal to the court and announces that even though the prince is his eldest son, Hal will not be succeeding him on the throne. That’s because they hate each other, but also because of why: The young Hal believes war is a waste.

You could call him a peacenik, except that like a Marine or a Jedi he’s got elite warrior training in his blood. When he volunteers to halt a battle campaign, reducing it to a duel of commanders, he and his rival, Hotspur (Tom Glynn-Carney), don bulky armor and raise their broadswords, and the fight, in its clanking Robert Bresson-meets- XFC way, establishes that our hero can be a medieval badass when he has to. And he will have to.

I haven’t, thus far, been much of a fan of David Michôd as a director (I thought “Animal Kingdom” was an overpraised mess, and that his Netflix movie “War Machine” was inert). But he has staged “The King” with a gloomy grandeur that sweeps you up. It helps that the script, cowritten by Michôd and Joel Edgerton, sounds like Shakespeare with the verbal knots combed out of it. Henry is, of course, surrounded by schemers and backstabbers, but the treachery isn’t telegraphed. When the Dauphin of France sends him a child’s ball as a present, and it’s urged that he treat the provocation as an act of war, Henry rightly resists. But then an assassin is sent to kill him. That’s more than a provocation – but it’s still where the king gets played.

Chalamet, now with a short bunchy royal bowl cut, which brings out the dark nobility of his eyes, makes Henry a naïf running on instinct. Yet he’s a master of courtly manners, of swords’-points verbal exchange. He doesn’t want to go war, but the world seems to be offering him no choice. That’s certainly true when the Dauphin shows up. He’s played byRobert Pattinson– who’s about to play Batman, but here, in long orange-blond hair, with a twisted leer, he turns the Dauphin into the lewd dissolute Joker of France, a flyweight nihilist who willtauntHenry into war.

Pattinson pops in this role, and there are other fine performances in “The King.” Lily Rose-Depp makes her presence felt, for perhaps the first time ever, as Catherine of Valois, whose delicate worldliness matches Henry’s. And Joel Edgerton is superb as John Falstaff, Henry’s friend, confidante, and protector (until he’s demoted, at least for a bit), who’s portrayed as the boozy rotund figure of legend, except that Edgerton, in bangs and a bushy beard, makes him a life-size hellion with a saddened knowledge of war.

War is never glamorized in “The King.” That’s where the movie is different from, say, “Braveheart.” Before the fabled Battle of Agincort, Chalamet gives a speech to the troops that, if it doesn’t quite match Mel Gibson’s in that film (or Laurence Olivier or Kenneth Branagh’s delivery of the St. Crispin’s Day speech in the two great screen versions of “Henry V”), holds its own as a young man’s statement of doomy idealism. Too many movies set in this period end up as action films in medieval drag. The excitement of “The King” is that Michôd lays out the consequences of combat with gruesome precision, demythologizing the battle. This one starts off with multiple showers of arrows, shot with English long bows (the only chance they have to defeat the gargantuan French army), then becomes a mini apocalypse in the muck. Henry gets splattered by it all: the mud, the blood, the death. The way Chalamet plays him, though, what wounds Henry the most, even in the glory of victory, is surrendering to the knowledge that war itself can be tamed, but never defeated. 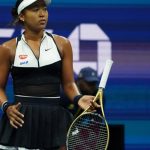 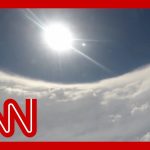