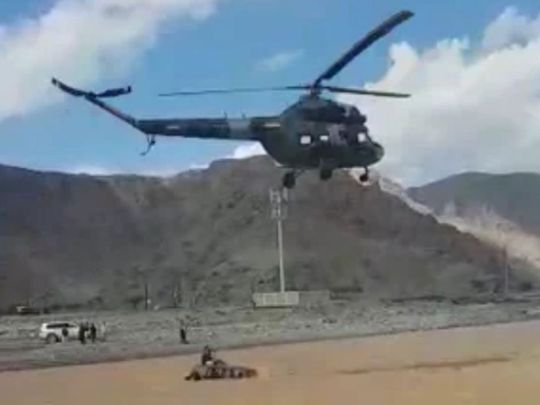 Ras Al Khaimah: In a successful professional operation, the Air Wing of Ras Al Khaimah Police managed to rescue an Emirati man whose vehicle was stuck in the valley of Beah (Wadi Beah)

The Emirati motorist , in his 20’ , was rescued by Ras Al Khaimah police’s Air Wing during the inclement weather on Sunday , Ras Al Khaimah Police said

A video released by Ras Al Khaimah police shows an Emirati man sitting on the rooftop of a four-wheel drive. He is rescued by a police helicopter .

Col. Al Yamahi rescued the motorist, who is in good health and enjoying the rainy weather.

Ras Al Khaimah Police urged people to stay away from valleys and waterlogged areas during the downpour.

Previous A look ahead to the 2020 IMSA sports car season, Ars Technica
Next Valve Beaten by Its Own Hubris amid Dev Revolt, Crypto Coins News