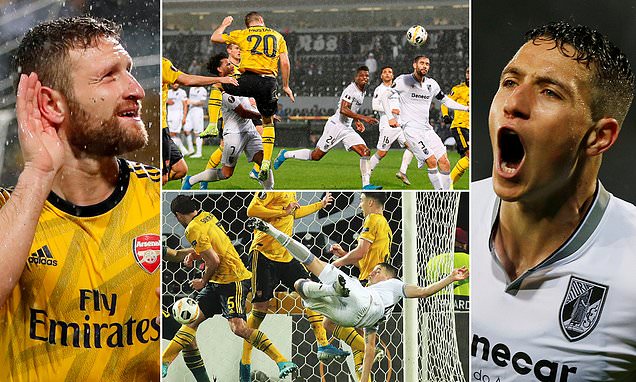 When it rains it pours. And doesn’t Unai Emery know it.

Another matchday brought more problems for underfire Emery whose Arsenal side blew a lead for the fourth game running at the end of another underwhelming and uninspiring display to ensure the heat remains well and truly on their head coach.

In a Guimaraes downpour, Arsenal failed to get a shot on target until the 80 th minute when Shkodran Mustafi scored his first goal of the season.

Duarte celebrates his point-saving goal, and Vitoria came close to snatching a win amid a late onslaught from the home side

And then, just when they looked to have somehow stolen victory thanks to an unlikely hero, they contrived to chuck it away by conceding an awful injury time equaliser.

Arsenal remain in control of their destiny in Group F but given all that is on his plate and the growing doubts around him this sort of largely-limp display and poor result is the last thing Emery needed.

This Europa League occasion might have been taking place at an unfamiliar time – 3. 50 pm on a Wednesday to avoid a clash with nearby Braga who are in Eu ropa League action tomorrow – but this was very much a case of same old Arsenal, certainly the one Emery has seen far too often of late.

After stripping Granit Xhaka of the captaincy and his other four options either back home in England or on the bench here Emery handed Rob Holding the armband in Portugal.

He was part of a new look defense as Unai Emery opted for a back three for the first time this season , trying something new in a bid spark Arsenal back into life after three successive draws.

Arsenal’s Joe Willock found it tough in the pouring rain, and was substituted for Lucas Torreira in the 78 th minute

Nicolas Pepe, who scored two free-kicks to win the reverse game at the Emirates, started but struggled to make an impact

Arsenal’s Gabriel Martinelli has flourished in the Europa League so far this season, yet found the going tough against Vitoria

The se tup certainly suited Kieran Tierney, whose raiding runs and inviting deliveries have been a feature of his early Arsenal performances.

He was at it again just three minutes in and left asking why Gabriel Martinelli and Pepe were on their heels when he escaped down the left and whipped in his first cross of this clash.

Arsenal should have needed no reminders of the threat Vitoria posed having received a huge scare in the Emirates meeting before Nicolas Pepe’s two late free-kicks won it for the Gunners.

But Vitoria’s Pepe gave Arsenal one at the Estadio D. Afonso Henriques, crashing a 25 yard shot against the post.

Former Tottenham starlet Marcus Edwards, a scorer in the first tie, gave Arsenal a further warning when he cut in from the right and forced Emiliano Martinez to tip away his effort full stretch before Davidson’s cross shot and Edmond Tapsoba’s header which also needed saving caused the visitors further concern.

Matteo Guendouzi came on as a second-half substitute, seen here challenging for the ball against Vitoria’s Marcus Edwards

Emery did not look best pleased. His blunt pre-match interview already suggested he was not in the best mood. What was unfolding here in front of the soaked Spaniard was not lifting his spirit.

Maitland-Niles needing to leave the pitch to have a necklace removed and then an animated discussion with the fourth official only added to his frustration.

The sight of Bukayo Saka getting to the byline and crossing for Holding, who headed over, might have offered him some encouragement though another effort from Davidson and then seeing more of his own side struggle to keep possession, control the game and create chances was more reflective of a grim first-half for the Gunners. The second could only get better. Surely.

It was a proud evening for center back Rob Holding, but he couldn’t captain Arsenal to a clean sheet in the Europa League

It nearly did for Vitoria. Edwards was sent racing away in behind Arsenal’s defense by Bruno Duarte and seemed to have only two options – either cross to a teammate or drive in towards goal and get a shot off.

He did neither in the end, dashing to the byline before taking too long to square the ball and the chance disappeared.

Arsenal’s struggles at the other end were continuing. Twice in promising situations Saka was just unable to produce the final killer pass.

The 54 th minute introduction of Matteo Guendouzi, for injury victim Dani Ceballos, lifted Arsenal who all of a sudden had an element of control in midfield and urgency and intent in their play.

The energy Guendouzi brought quickly faded and with 20 minutes to go Emery flapped his arms furiously in the air, urging his side to raise it.

With ten minutes to go, finally there was something to encourage him. Martinelli was fouled 25 yards out paving the way for Pepe to curl in a free-kick Mustafi headed in at the back post.

That looked to be enough for Arsenal, especially when Leo Bonatini, on loan from Wolves, blazed a 90 th minute chance over for Vitoria.

But such is Arsenal’s luck Vitoria weren’t done, Martinez flapped at Edwards’ cross, the hosts kept the ball alive and Bruno Duarte unleashed an overhead kick that bounced into the ground and net despite Arsenal having a host of defenders back in their box including two on the line.

And in the end Arsenal were lucky they did not lose as Mustafi was inches away from scoring a nightmare own goal and then Rochinha fired inches wide in another frantic finish between these sides.

Vitoria’s ma nager Ivo Vieira reacts in the rain, and the result means the Portuguese side stay bottom of Group F 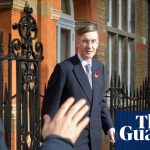 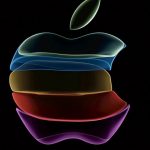