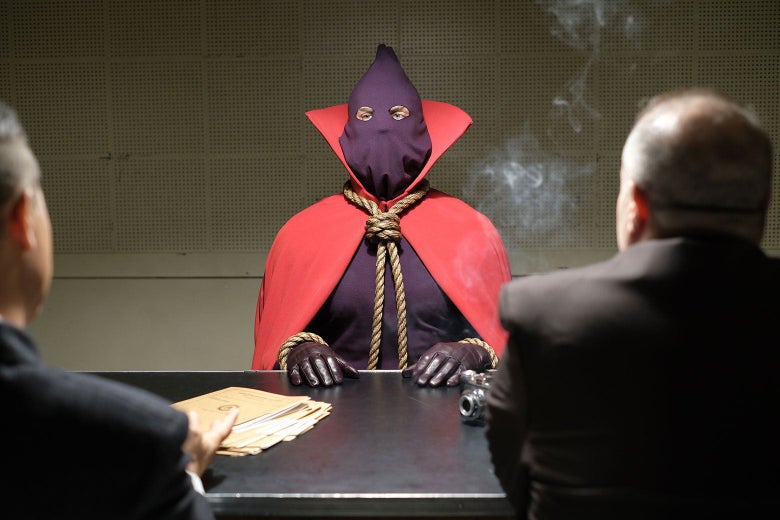 “This Extraordinary Being,” the sixth episode of HBO’sWatchmen, proves that it is not just an interesting show that discusses race in passing, but a great one that has the boldness to honestly tackle the reality of blackness in America.

The show’s last episode ended with Angela Abar (Regina King) unwisely downing a bottle of her grandfather’s Nostalgia, the outlawed pharmaceutical that concentrates people’s memories in pill form. You’re not supposed to take all of them at once, and you’redefinitelynot supposed to OD on someone else’s memories. The pills transport Angela to the 1930 s, where Will Reeves (Jovan Adepo), the grandfather she’s only recently met, becomes the first black officer on the Tulsa police force. Despite having survived the Tulsa race massacre, Will seems to believe that joining the police will allow him to make the world more just. But when he tries to arrest a white man for firebombing a Jewish store, he finds out his job just makes him a bigger target: His fellow officers respond by nearly lynching him, stringing him up by his neck and leaving him gasping for breath on the ground.

Never have I thought that a show spearheaded by a white man, Damon Lindelof, would so effectively capture the complexity of being a black person in this country. The number of unspoken microaggressions that pepper the daily life of black people throughout history has been put on screen by black filmmakers, butWatchmenis the first time that I can remember a show led by a white writer has done so without apology or a “safe” white character inserted into the narrative to show the inherent goodness of that demographic . What’s more, the way that life was, and in many ways still is, a daily brush with death for people of color is boldly presented. The specter of death was everywhere and inescapable in this episode, and this was brought out horrifically and convincingly by Will Reeves ’near-lynching. But what struck me most was the way “This Extraordinary Being” showed something that black folks have always known and many white folks are just now beginning to see: the way whitewashing distorts history.

When I was a kid, I was in love with the song “Hound Dog” by Elvis Presley. I’d run through the house singing it at the top of my lungs. I was singing it one day when my uncle pulled me to the side and whispered in my ear. “You singing the white version,” he said. “But the black version is better — and first.” I did not understand what he meant until I did some digging. I discovered that white men wrote the song, but it wasa black womanwho first sang it. Elvis was all that anyone knew, and Big Mama Thornton’s role in pop cultural history had been lost.

InWatchmen‘s second episode, we’re introduced to Hooded Justice, the first masked hero, seen violently foiling a grocery-store robbery on the lurid show-within-a-showAmerican Hero Story. (The incident is itself taken from a text piece in the back of one of the original comic’s issues.) It comes across as a throwaway scene, meant to show us the way that Hooded Justice and his fellow Minutemen have become a part of the mythos of the country. It was not until I saw Episode 6 that I realized whatWatchmenwas up to. The scene was repeated from the perspective of Hooded Justice, and it turns out that instead of stopping a simple robbery, he was being shot at after discovering the grocer’s ties to an underground white supremacist organization.

Watchmenhas offered plenty of psychosexual reasons for why vigilantes might wear masks, but in “This Extraordinary Being” we learn that Will Reeves, who became Hooded Justice, put on the mask for practical reasons. He’s actually safer as a masked vigilante than he was as an officer — at least, so long as people think that he’s white.

The episode offers a chilling explanation for Hooded Justice’s costume, which includes a black hood that entirely covers his face and a hangman’s noose around his neck — a perpetual reminder of his near-execution. But Hooded Justice’s costume also includes two circles of tan-colored makeup around his eyes, an addition suggested by his wife, who says that the city’s white residents must “think one of their own’s under the hood.” History, includingAmerican Hero Story, remembers Hooded Justice as an unnamed white man. ButWatchmendoes something I’ve never seen before: It blackwashes history.

In theWatchmencomics, we never learn Hooded Justice’s true identity, but it’s strongly implied that he’s a white strongman whose decomposing body eventually washes up in a river. By inserting Reeves into the narrative Lindelof and his writing staff, which includes several black writers, look back at history and insert blackness where there was (at least implied) whiteness. It’s a bold move essential to the narrativeWatchmenis exploring. If Hooded Justice was the first hero and the motivation for the heroes who came after, it is ironic that he, a black man, had to act white to achieve acceptance from the very people he inspired.

There are echoes of this in black history — from fair-skinned black peoplepassing as whiteto survive in a white supremacist culture to Big Mama Thornton, RL Johnson, and countless other black artists who motivated the white artists that came after (and whose names we remember far better than the black artists who inspired them). Big Momma Thornton, like many other black artists, was considered “too black” by music executives. And like Hooded Justice, they have largely been forgotten. A white artist’s versions of their work is all that remains.

Will Reeves learns that, as a police officer, he’s not going to make things better by working within a broken system. It makes me wonder if Angela, his granddaughter, will come to the same conclusion.