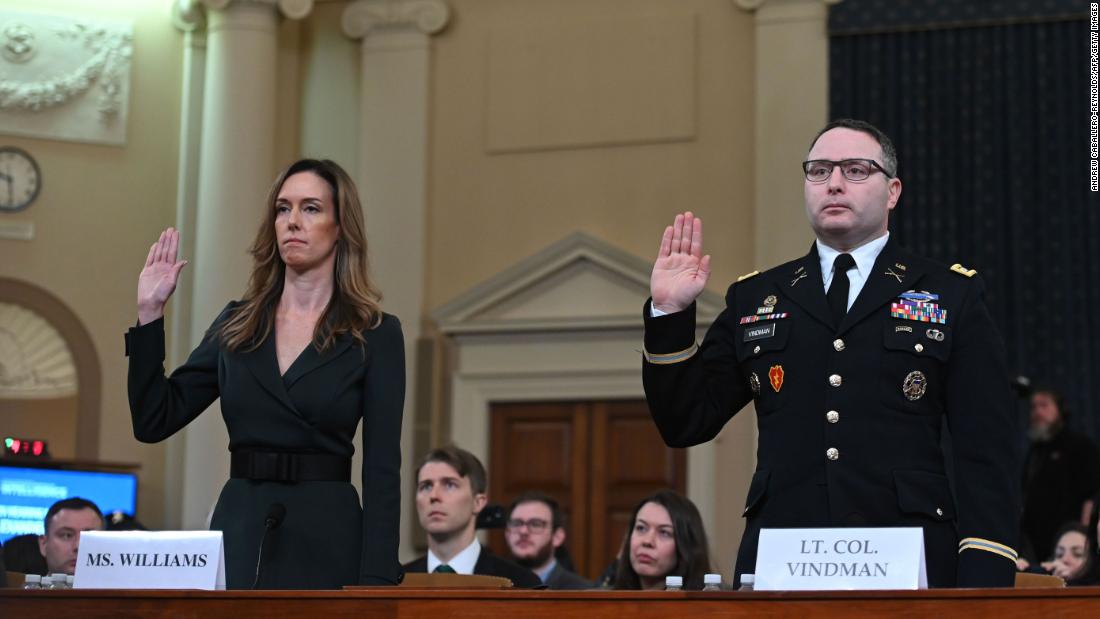 (CNN)A key National Security Council aide told lawmakers Tuesday that President Donald Trump’s push for Ukraine to investigate former Vice President Joe Biden on a July call was “inappropriate,” and he knew “without hesitation” that he had to report it.

“It is improper for the President of the United States to demand a foreign government investigate a US citizen and political opponent, “Lt. Col. Alexander Vindman saidin his opening remarkson the third day of public impeachment hearings. “It was also clear that if Ukraine pursued an investigation into the 2016 election, the Bidens, and Burisma , it would be interpreted as a partisan play. “

Vindman told the committee leading House Democrats’ impeachment inquiry into Trump that he believed the US President’s request constituted a demand of Ukrainian President Volodymyr Zelensky, and he was concerned in particular about an investigation from a foreign power where there was “at best, dubious belief that this would be a completely impartial investigation.”

“The culture I come from, the military culture, when a senior asks you to do something, even if it’s polite and pleasant, it’s not to be taken as a request, it’s to be taken as an order,” Vindman said. “In this case, the power disparity between the two leaders, my impression is that in order to get the White House meeting, President Zelensky would have to deliver these investigations.”

The testimony before the House Intelligence Committee from Vindman and Jennifer Williams, a State Department aide detailed to Vice President Mike Pence, represents the first public hearing from officials who listened into the July 25 call between Trump and Zelensky.

Vindman’s testimony gives Democrats evidence of a quid pro quo linking a one-on-one meeting between Trump and Zelensky to the opening of investigations into the President’s political rivals. Vindman said that US Ambassador to the European Union Gordon Sondland referred to investigations “into the Bidens, Burisma and 2016 “when speaking with Ukrainian officials at a July 10 White House meeting.

Vindman said he reported his concerns about Trump’s call out of a “sense of duty.” And he defended his fellow witnesses from what he described as “reprehensible” attacks. Testifying in his Army uniform as an active-duty soldier, Vindman invoked his father’s decision to leave the Soviet Union and come to the US, noting that the testimony he was giving Tuesday would likely get him killed in Russia.

“Do not worry, I will be fine for telling the truth,” Vindman said.

Tuesday’s hearing kicks off a marathon week where impeachment investigators will hear publicly from nine witnesses at five impeachment hearings over the next three days, as Democrats race to collect public testimony this week about Trump’s role in pushing Ukraine to open investigations and the withholding of US security aid and

On Tuesday afternoon, former US special envoy to Ukraine Kurt Volker and Tim Morrison, a former a top Russia and Europe adviser on the National

Vindman testified that he reported his concerns to National Security Council lawyers through proper channels about both the July 25 call and a July 10 meeting in which a US ambassador proposed opening investigations to the Ukrainians in attendance. He said he raised these concerns privately “because they had significant national security implications for our country.”

Williams did not tie any motives to the President’s request to Zelensky to investigate Biden , but explained why she believed it was unusual.

“I can’t speak to what the President’s motivation was in referencing it, but I just noted that the reference to Biden sounded political to me, “Williams said.

Vindman pressed on whom he spoke to

California Rep. Devin Nunes, the top Republican on the House Intelligence Committee, pressed Vindman on whom he spoke to about the July 25 call, which sparked a fight over the whistleblower.

Vindman testified that he spoke to his twin brother, an NSC lawyer, State Department official George Kent and an unnamed official in the intelligence community.

When Nunes demanded to know who that official was, Schiff cut him off and decried any GOP attempts to “out the whistleblower. “

Vindman said that the official was” a properly cleared individual with a need-to-know (clearance). ” )

Nunes argued that Vindman testified he didn’t know who the whistleblower was.

“How is it possible for you to name these people and then out the whistleblower?”

Vindman said he was advised by his counsel not to answer questions about specific members of the intelligence community, and Schiff would not allow the question.

Rep. Jim Jordan, an Ohio Republican, continued the line of questioning, asking Vindman about who he spoke to about the call and then noting that Williams did not speak to anyone afterward.

The dust-up over the whistleblowerextended a fight that first took place behind closed doorswhen Vindman appeared last month, when several lawmakers got into a shouting match. Republican have repeatedly accused Democrats of hiding the whistleblower, urging Schiff to subpoena the person for their testimony.

Democrats have pointed to the President’s attacks on the whistleblower as reason that the official should be kept anonymous. The whistleblower’s attorney has said they would be willing to answer written questions from Republicans.

In hisopening statement,Vindman pushed back at the attacks on his colleagues who have appeared as part of the impeachment inquiry, saying that the “character attacks on these distinguished and honorable public servants is reprehensible.”

“It is natural to disagree and engage in spirited debate, this has been our custom since the time of our Founding Fathers, but we are better than personal attacks, “Vindman said.

In the wake of their previous private testimony, both Vindman and Williams have been attacked by the President as “never Trumpers.”

Vindman in particular has faced numerous attacks from Trump’s allies, including some who have questioned Vindman’s patriotism. Vindman’s judgment was also questioned by Morrison in his testimony. Wisconsin GOP Sen. Ron Johnson – who has been in the middle of several key Ukraine episodes – sent Republicans a lengthy letter Monday about Ukraine that included an attack on Vindman, suggesting he was part of the executive branch that resents Trump and reacts “by leaking to the press and participating in the ongoing effort to sabotage his policies and, if possible, remove him from office. “

House Intelligence Chairman Adam Schiff, a California Democrat, criticized the attacks from Trump and others against Vindman and Williams.

“Today’s witnesses, like those who testified last week, are here because they were subpoenaed to appear, not because they are for or against impeachment,” Schiff said.

During Republican questioning, Vindman was asked to respond to Morrison’s criticisms. He brought with him a review from his former boss, then-White House Russia adviser Fiona Hill, who praised his performance, to rebut the issue Morrison raised.

GOP counsel Steve Castor asked Vindman several questions about an offer from Ukrainian officials to become the country defense minister, including whether the offer was delivered in English or Ukrainian.

Vindman responded he didn’t take it seriously. “I’m an American. I came here when I was a toddler and I immediately dismissed these offers. Did not entertain them,” he said.

Rep. Jim Himes, a Connecticut Democrat, slammed the line of questioning, accusing Republicans of an effort “to give the right-wing media an opening to question your loyalties.”

Morrison and Volker to testify this afternoon

In the afternoon, Morrison and Volker are two witnesses that Republicans asked Democrats to bring in for public hearings, and GOP lawmakers are hopeful they will poke holes in the Democratic case. Volker, who worked with the President’s personal attorney Rudy Giuliani to help the Ukrainians draft a statement on investigations, testified that he did not know about a quid pro quo connecting US security aid to investigations into the President’s political opponents.

Morrison testified that he had concerns the July 25 call would leak, but he did not see anything wrong or illegal in the content of the call. But Morrison also corroborated Taylor’s testimony, saying that Sondland had said the President told him Zelensky “must announce the opening of the investigations.”

This story has been updated with additional developments Tuesday.