Ajit Pawar, after his whirlwind rebellion against uncle Sharad Pawar and 80 – hour stint as deputy Chief Minister of a BJP-led government, returned to the Nationalist Congress Party (NCP) family on Wednesday with a warm hug from cousin Supriya Sule outside the Maharashtra assembly. Ms Sule, who had hit out against Ajit Pawar’s betrayal with her “party and family splits” status message on WhatsApp on Saturday, also held her cousin and smiled for the cameras, in rare PDA.

“There is no question of return, I am with the NCP and have been with NCP, “Ajit Pawar told NDTV as he walked into the assembly for his oath as MLA.

” I have nothing to say (right now) , I will speak at the right time. I had said earlier also, I am in the NCP and I will remain in the NCP. There is no reason to create confusion. “

Supriya Sule, the daughter of Sharad Pawar, also greeted outgoing Chief Minister Devendra Fadnavis of the BJP with a smile.

“It is a day of happiness, but also a day of responsibility, “Ms Sule told NDTV. 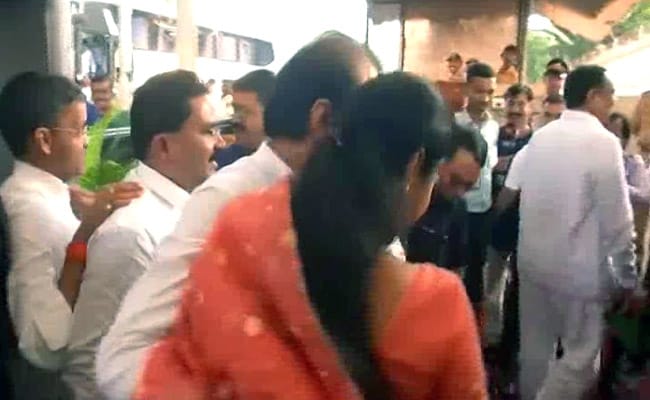 As Ajit Pawar entered the Vidhan Bhavan, Supriya Sule greeted him with a warm hug.

Ajit Pawar stunned his family and party when,hours after attending am eeting of the Shiv Sena-NCP-Congress alliance, showed up on TV screens on Saturday morning being sworn in as deputy to the BJP’s Devendra Fadnavis. He told reporters his decision to join hands with the BJP was for the sake of a stable government. He also claimed that the entire party, including his uncle, was with him.

As Sharad Pawar vehemently denied he had secretly collaborated with the BJP along with his nephew, the family launched efforts to bring Ajit Pawar back.

While projecting a united front with the Sena and Congress, Sharad Pawar continued to reach out to Ajit Pawar. He carefully avoided lashing out at his nephew publicly.

Supriya Sule also stopped using WhatsApp status messages to reflect updates in the Pawar family feud. In one particularly bitter status message, she had posted: “Who do you trust in life. Never felt so cheated in life. Defended him, loved him. Look what I get in return.”

Finally, senior NCP leaders held long discussions with Ajit Pawar to convince him that he would retain his respect and stature on his return.

Ajit Pawar, who had promised the mass support of NCP lawmakers to help Devendra Fadnavis reach a majority-mark in the assembly, finally gave up on Tuesday after the Supreme Court ordered an immediate floor test.

Before resigning citing “personal reasons”, he told Devendra Fadnavis he didn’t have enough time to pull in NCP MLAs, according to sources.

“Finally Ajit –dadarealized family has to be together, “said a veteran NCP leader.