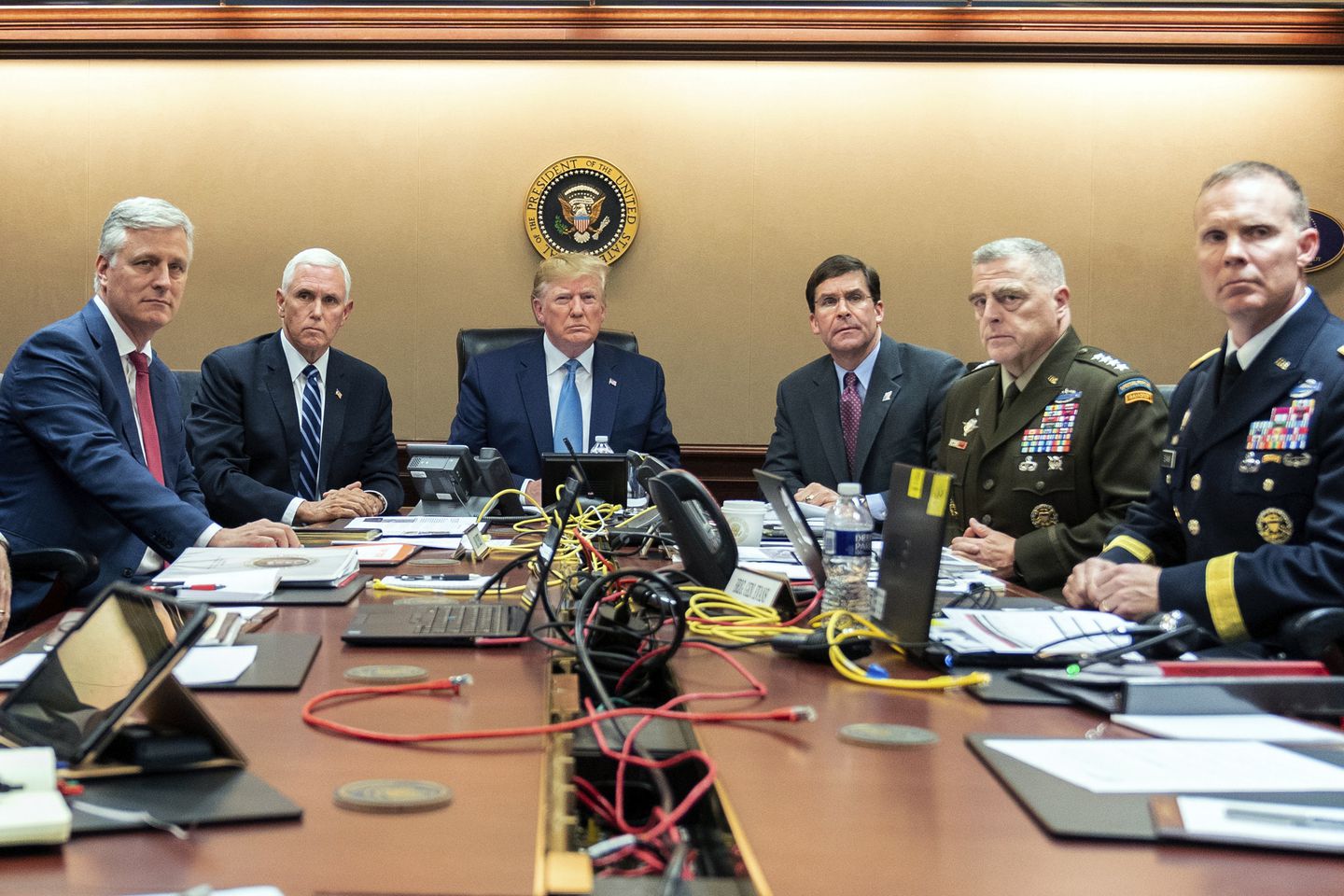 Their target,Abu Bakr al-Baghdadi, the brutal founder and leader of the Islamic State, was holed up in a compound in northwestern Syria with family members and terrorist associates, and the United States had been watching him for days.

And it was a tip from a disaffected Islamic State militant that set the operation in motion, according to a US official, who like others spoke on the condition of anonymity to discuss a sensitive operation.

What followed was what Trump called a “dangerous and daring nighttime raid“that was carried off“ in grand style. ”It ended, he said, with Baghdadi fleeing from advancing US forces into a dead-end tunnel and detonating a suicide vest, killing himself and three of his children.

“He didn’t die a hero. He died a coward, ”the president said. “Crying, whimpering, screaming and bringing kids with him to die. Certain death. ”

Other U.S. officials declined to describe Baghdadi’s state in his last moments.

The disaffected ISIS member had become an informant for Kurdish forces working with the Americans, the official said. And he provided critical information on Baghdadi’s whereabouts.

The informant emerged in early summer, and over time U.S. officials became more confident in his credibility and reliability, the official said. Within the last couple of weeks, it became clear that, when put together with other information, the tip about Baghdadi’s location was solid, the official said.

“It was a montage of a lot of pieces of intelligence that came together with a specific asset that was helpful, ”the official said.

How the operation – named afterKayla Mueller, an American aid worker who was abducted and raped repeatedly by Baghdadi before she was killed, according to US officials – came together is still something of a mystery. The troops included some Delta Force members, according to two U.S. officials, but other details, such as how they communicated with more senior commanders in Washington and beyond, and what weapons were involved, remain unknown.

But in colorful and at times taunting language, Trump revealed details Sunday morning of an operation that marks one of the major victories in the five-year US-led campaign against the Islamic State .

The president, speaking at the White House, said he “got to watch” much of the raid beginning about 5 pm in Washington. He credited undisclosed technology for giving him “absolutely perfect” visuals that were “as though you were watching a movie.”

Trump, who returned to the White House from golfing about 4 pm , entered the Situation Room about an hour later, he said. Seated at a table in a navy suit and blue tie, he was flanked in a photo released by the White House by Vice President Pence, Defense Secretary Mark T. Esper, White House national security adviser Robert O’Brien and two generals: Army Gen . Mark A. Milley, chairman of the Joint Chiefs of Staff, and Air Force Lt. Gen. Scott A. Howell, commander of Joint Special Operations Command.

Flying after midnight in the Middle East, the helicopters needed to cross airspace controlled by Iraq, Turkey and Russia, and U.S. officials informed them they had an operation planned without providing details.With the Russians in Syria, the Pentagon has called such communication “deconfliction” and said it has prevented accidents and mistaken intent by adversary forces.

When they arrived, they tried to call Baghdadi out to see if he would surrender , Esper said. A couple of adults and 11 children came out, a US official with knowledge of the operation said.

Baghdadi remained inside, as U.S. officials assumed he might. U.S. forces responded by blowing holes in the side of the compound in an effort to avoid any booby-trapped doors, Trump said. Baghdadi retreated into a tunnel, and then detonated his vest.

Five enemy fighters were killed in the operation in the compound, and others were killed outside, the White House said in a statement . O’Brien, speaking in an interview on NBC’s “Meet the Press,” said that U.S. troops confirmed that Baghdadi was dead at 7: 15 pm

Despite Baghdadi’s vest detonating, U.S. troops were able to recognize him, the official said. A ground commander reported to Marine Gen. Kenneth “Frank” McKenzie, chief of U.S. Central Command, that they were “absolutely convinced” it was the Islamic State leader. McKenzie in turn relayed that message to the White House. The results of the DNA test were complete Sunday morning, the official said.

Milley was “emphatic” that the military had to dispose of Baghdadi’s remains in accordance with Muslim traditions, which typically require burial within 24 hours, the official said. When Navy SEALs killed al-Qaeda leader Osama bin Laden in Pakistan in 2011, his body was buried at sea after traditional Islamic rites were performed. It was not clear Sunday whether that occurred in this case.

The remains of at least two wives were left behind. Trump said they had not detonated their vests and were still wearing them, making it too risky for U.S. troops to dispose of the bodies.

Trump said that one U.S. working dog – described by the president as “beautiful” and “talented” – was wounded after chasing Baghdadi into the tunnel. Trump said that no U.S. troops were injured, but Esper said separately that two service members suffered minor injuries.

“They’ve already been returned to duty,” Esper said, speaking on CNN’s “State of the Union. ”

Fewer than 100 US troops were on the ground in the raid, with more involved in a supporting role. Several kinds of aircraft were used in the operation, including CH – 47 helicopters, the secretary added. They came under fire early in the mission from “locals in the area,” and the Americans returned fire in self-defense, he said.

Videos circulating on social media Sunday from Barisha appear to depict helicopters flying at low altitudes in the dark, heavy gunfire and occasional explosions. Images taken after daybreak show the home where Baghdadi lived reduced to rubble. Esper said it was deliberately destroyed.

Trump and other U.S. officials credited Syrian Kurdish forces – whose alliance in the battle against the militants the president has recently played down as he withdraws forces from Syria – with providing useful information. Mazloum Abdi, commander of the Kurdish-led Syrian Democratic Forces, said in a tweet that they had been gathering information about Baghdadi for five months, while Trump said the operation itself started two weeks ago once the United States had him “scoped.”

“We thought he would be in a certain location,” the president said. “He was. Things started checking out very well. ”

But it wasn’t clear how long Baghdadi would stay in Barisha, a small village west of Aleppo.

Pence, speaking on CBS’s “Face the Nation,” said the United States received information about Baghdadi’s most recent location early in the week.

“Through a combination of intelligence, surveillance, reconnaissance, we believe we knew where he would be, and by Thursday afternoon were informed that there was a high probability he would be at the compound in Idlib province, ”Pence said.

The president directed the military to develop options, and they were presented Friday, Pence said. “Actionable intelligence” obtained Saturday allowed the raid to go forward, he added.

“It was incredible to be in the Situation Room and to see this unfold in real time as our Special Forces were on the ground, to see their professionalism over a period of two hours,” he said. “America and the world are safer today with the leader of ISIS dead.”

Missy Ryan contributed to this report.