Four days after an unruly mob of around 35 Men, some of whom were reportedly drunk, barged onto the campus of Delhi’s Gargi college – an all-girl’s institution – and sexually assaulted students, a police case has been filed.

The move came amid growing outrage over the incident that saw Chief Minister Arvind Kejriwal state this afternoon that his government would “not tolerate misbehaver with our daughters” and demanding the “harshest possible” punishment for those responsible.

The capital city’s police force reports to the central government which is controlled by the BJP – a bitter rival of Mr Kejriwal’s Aam Aadmi Party (AAP).

“Misbehavior with our daughters in Gargi College is very sad and disappointing. T his sort of behavior will not be tolerated. Culprits should be given the harshest possible punishment and we must ensure that children studying in our colleges feel safe, “the Chief Minister wrote on Twitter.

Mr Kejriwal, whose AAP is widely predicted to return to power in Delhi following Assembly elections on Saturday, had made women’s safety one of his poll promises.

Meanwhile, Delhi Police have taken suo moto cognisance of the sexual assault and proposed a probe into the incident that took place as students celebrated a cultural festival on February 6. An FIR or First Information Report was filed at the Hauz Khas police station.

The National Commission for Wome n (NCW) has also sent a team to investigate the incident.

“I read on social media that girls were molested and no step taken by the administration. I have sent a team. They wanted to talk (to the) principal and also to talk to police. I can only react after they talk to them, “Rekha Sharma, the NCW Chairperson, said.

Over 348 students, furious over the “complete lapse of security” at one of the city’s more prestigious institutions, took out a protest within the college campus this morning. Speaking to NDTV, one of the students described her horrific experience.

“My friends and I were standing in a group … another friend was taking our photo when a group of three men came and threw money at her and walked away laughing and cheering. When I wanted to report it to the Proctor I really could not … there was no signal in our phones. Something happened to us and we felt so powerless, “she said.

Another student told NDTV that the security issue – students needed ID cards or passes to enter the campus – was” totally wrecked “and that gates were damaged because large mobs pushed their way into the college campus.

According to eye-witness accounts and social media posts by students and staff, at around 6: pm on February 6, packs of unruly, drunk men forced their way in and assaulted women , chasing them all over the campus.

“The administration did nothing to control it. The RAF (Rapid Action Force) personnel were standing right across the campus. They did absolutely nothing. We have visuals, “another student told NDTV on condition of anonymity.

An unruly mob of – men, some of whom were drunk, barged onto Gargi College campus last week

According to news agency IANS the men were part of a pro-citizenship law rally.

The shocking incident, which took place two days before Delhi voted in bitterly-contested Assembly elections, has also drawn criticism from the opposition.

Congress leader Shivani Chopra, who contested Saturday’s poll from the Kalkaji constituency, hit out at Chief Minister Arvind Kejriwal and his AAP as well as the BJP.

“They are not letting me enter the campus. It is a shameful incident. Chief Minister of Delhi should come out and stand in solidarity with the students. In fact, Home Minister Amit Shah should also come out and take cognizance of the law and order situation, “Ms Chopra said.

Responding to the incident in parliament today, Union HRD Minister Ramesh Pokhriyal said the alleged sexual assault on Gargi College students was “not right” and said the college administration had been asked to look into the matter.

with input from ANI, IANS 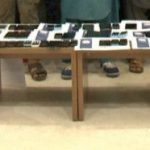