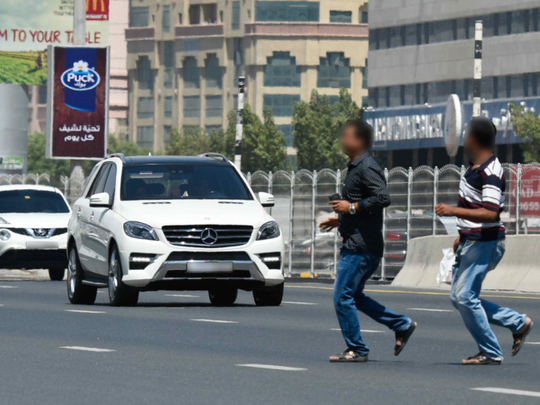 Sharjah: Over 2,400 jaywalkers were fined between January and June in Sharjah, police have said.

The number has decreased compared to the same period last year as Sharjah Police have intensified efforts to increase road and pedestrian safety and have been strictly issuing fines to jaywalkers.

Captain Saud Al Shaiba, spokesperson for the Traffic and Patrol Department, told Gulf News that Sharjah Police issued fines to 2,410 people who were caught jaywalking in the emirate till June this year.

Sharjah Police have identified jaywalking as a serious issue and launched an inspection campaign targeting pedestrians who cross roads from non-designated areas.

Captain Al Shaiba said jaywalking is an offence; violators get a Dh400 fine and it is punishable under the UAE Traffic Law.

“It’s important that all road users understand the risks of violating safety rules, whether crossing or walking on the road, and learn how to stay safe,” he added, pointing out that pedestrians are the most vulnerable ones on the road.

“Pedestrians are advised to cross roads from the zebra crossing only or from the pedestrian bridges, otherwise they will face fines.”

The number of run-over accidents formed 38.4 per cent from the total of traffic accident in Sharjah since the beginning of this year.

According to Sharjah Police statistics, a total of 14 deaths occurred due to traffic accidents during first quarter of 2020

A total of 14 deaths were recorded during first quarter of this year due to traffic accidents, a significant drop from 49 deaths recorded in the same period last year.

Captain Al Shaiba said the decline was a result of the efforts of various traffic departments and their stakeholders.

Sharjah Police have stepped up patrolling on the roads and have issued fines to jaywalkers.

Pedestrians are repeatedly advised not to cross highways with speed limits of more than 80km/h because they could be held liable for any accidents resulting from their behaviour, said Captain Al Shaiba.

The Federal Penal Code allows traffic prosecutors to hold the jaywalkers who cause accidents resulting in injuries or property damage liable and refer them to court.

Also, Article 69 of the code imposes a fine of Dh500 and six traffic black points on motorists for not giving the priority to pedestrians at designated crossing spots, while Article 59 imposes a Dh500 fine for parking at the pedestrian crossings.

Article 65 of the law calls for Dh400 fine for stopping the vehicle in a manner that causes danger to jaywalkers or impedes the movement of pedestrians.

He stressed that traffic safety is a shared responsibility, and must be ensured by all members of the community in order to limit human, financial and material losses.

Captain Al Shaiba also urged motorists and pedestrians to abide by traffic regulations for their own safety and that of other road users.

The post 2,410 jaywalkers fined in Sharjah in first half of 2020 appeared first on The Wealth Land.