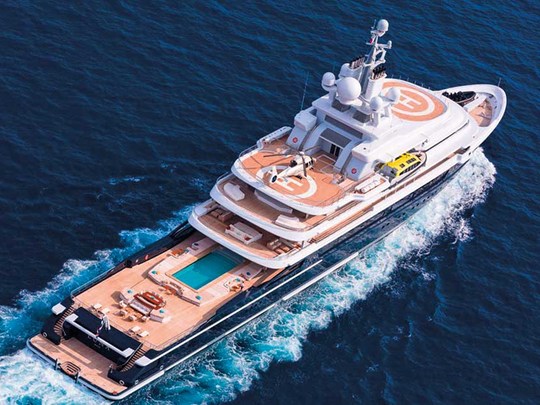 A $450 million superyacht at the center of London’s largest divorce fight may be finally allowed to set sail from a Dubai port, dealing a setback to litigation funder Burford Capital Ltd.

The 115-meter (380-foot) MV Luna has been holed up in Dubai while lawyers for Russian oligarch Farkhad Akhmedov fought a U.K. court order that transferred it to his ex-wife. Dubai’s Court of Appeal dismissed Tatiana Akhmedova’s attempt to enforce the British ruling last week, saying it was contradictory to Islamic sharia law.

It’s a blow to Burford Capital, which provided Akhmedova with funding in exchange for a potential share of as much as 30% of any recovery. It comes as the litigation funder fights questions from short seller Muddy Waters about the way it records gains in cases under dispute.

While the Dubai court lifted the arrest warrant on the nine-deck ship, its future is still in question because the U.K. judgment remains in effect alongside an injunction from the Marshall Islands, the flag state of the yacht, a spokesman for Akhmedova said.

“She remains confident in the merits of her case and that the Dubai courts will support common standards of international cooperation by recognizing and enforcing overseas judgments,” he said.

Burford insisted that it will also continue to pursue the case.

“Farkhad Akhmedov is a judgment debtor evading an English Court order “” as he will discover nobody is above the law,” Burford, which is based in New York and listed in London, said in a statement.

As part of its asset recovery program, Burford has given Tatiana Akhmedova 18 million pounds to fund the litigation, according to the Russian oligarch’s spokesman.

Burford shares have nearly halved since short seller Muddy Waters published a critical report on the company in August. Burford called the report “false and misleading.”

The stock was down 7.3% at 1:05 p.m. in London trading, heading for its biggest drop in about six months.

The yacht, which has 50 crew and two helipads, has been the focus of litigation for almost two years. It was impounded in Dubai and put into dry dock in an initial victory for Burford before Akhmedov persuaded the local courts to release the boat.

The British order was made after a judge said the billionaire must pay 41% of his assets to his wife in December 2016. The marriage ended two years earlier. Akhmedov refused to take part in the U.K. case and moved back to Russia.

“This judgment means their attempts to enforce this matrimonial and maintenance judgment in the UAE have now failed,” Carlo Fedrigoli, a lawyer for the tycoon, said in a statement.

It’s not the only legal fight stemming from the seizure of the yacht. The Russian also brought a $200 million claim for damages that named Burford as a defendant. The Dubai court of first instance dismissed the claim in January.