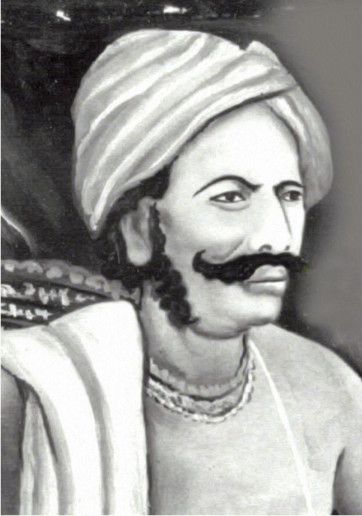 Born in 1809 in Khinda near Sambalpur, Odisha, Sai was the son of Dharani Singh, who was a descendant of Anirudhh Sai, the fourth Chauhan King of Sambalpur. He rebelled against the British in 1827 at the age of 18 when he was denied his legal right to the throne.

Sai went to jail for the first time in 1840 but was broken free during the Sepoy Mutiny of 1857.

After this he went back to Sambalpur and restarted his struggle against the Brits.

Many British generals who had quelled rebellion in other parts of the counrty were sent to Sambalpur to do the same but Sai didn’t allow them to succeed and is ultimately remembered for his struggle against the vastly superior British force.

In 1861 Major Impey stopped fighting and declared ‘Surendra Sai was never defeated and would never be defeated’.

However with the passing of Impey, the British again went after Sai.

Rearrested in 1864 and sent to jail again. He passed away in 1884 while being held captive at the Asirgarh Fort Jail in Madhya Pradesh.

He was imprisoned for a total of 37 years (in two phases of 17 years and 20 years). This imprisonment of 37 years is probably the longest any freedom fighter in the world.

A special video address by Eminent Odia/Sambalpuri Author and Dramatist Shri Mangulu Charan Biswal was the highlight of the night. Rashtrapati and Sangeet Natak Academy Awardee Biswal’s popular play on Veer Surendra Sai continues to be enacted in various parts of the country and has served as an eye opener to many people.

Global Odias for Odisha Development (GOOD) community member Rajesh Tripathy, who is the General Manager of a Global Business School, said it was important that children were made aware of Veer Surendra Sai’s legacy.

A request has been made to hang a portrait of Sai in the Indian consulate in Dubai.