Duo held for claiming to multiply money in Ajman 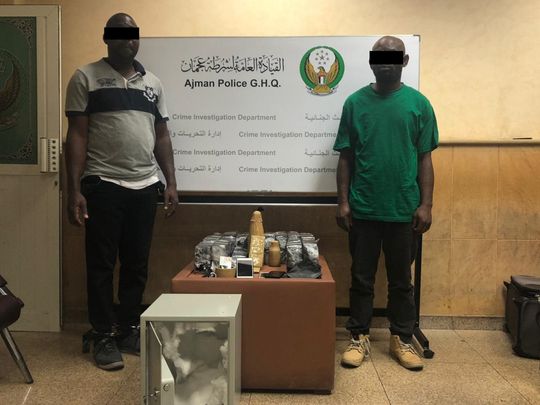 Ajman: The Criminal Investigation Department (CID) of Ajman Police on Wednesday arrested two members of a gang accused of cheating people by claiming to have the ability to double their money using black magic.

The two African men were arrested and fake money seized from them.

The police received complaints that a person had been exposed to a fraud by the African duo when they managed to convince him with a $100 bill that they could double the amount with the help of a special liquid. The man, who fell for the bait, parted with Dh15,000 following which they claimed they had converted into dollars. They even gave him a bag which they said contained the notes but asked him not to open it immediately because genuine banknotes took time to produce.

The police, who intervened at this juncture, set up a trap for the Africans. The victim was made to approach the duo again with a second request to multiply his money.

When he met them for this time, they asked him to pay Dh100,000 to convert it to $100,000. It was at this point that the two suspects were caught red-handed and arrested.

The suspects confessed to their crime and the tools used in the operation were confiscated.

The case has been transferred to public prosecution.

Lieutenant Colonel Al Nuaimi urged the public not to fall prey to such scams and to report any such illegal activity to the police.

The post Duo held for claiming to multiply money in Ajman appeared first on The Wealth Land.