Emirati on a drone mission to plant a million Ghaf trees

Dubai: Founder of the Cafu fuel delivery app Rashid Al Ghurair is on a mission to plant a million Ghaf trees across the UAE by drone within the next two years. If successful the project could be outsourced to wildfire affected regions like Australia and the Amazon.

In a pilot project conducted in Sharjah last month, 4,000 seeds were planted by drones that used algorithms to select the best location for seeds to germinate, the drones then propagated the seeds and returned to monitor their progress.

The drones scan potential areas identifying suitable topography and other parameters like wind speed, wind direction and humidity. This information is then beamed back to a cloud that uses artificial intelligence in real-time to match the preferences of Ghaf tree seeds against areas where vapour is most likely to be condensed as water to create a live map of ideal seed drop locations.

“After seeing the devastating effects of the wildfires in the Amazon last year I started to wonder if there were ways to harness technology to tackle this problem,” Al Ghurair told Gulf News.

“I started talking to friends across various sectors and then we were set aside some land by the Environment and Protected Areas Authority (EPAA) in Sharjah with which to begin trials.

“By continuing to experiment, fail and succeed, we will find the best way to get us to a million seeds germinated,” he added.

Further sites are now being explored across the emirates for best success rates with August being identified as the best release date, and Al Ghurair says he expects to see measurable results within the next two years in terms of actually getting to a million seeds germinated.

“It takes 15 years for these trees to grow four to six metres, so this will be a lifetime’s work,” he said. 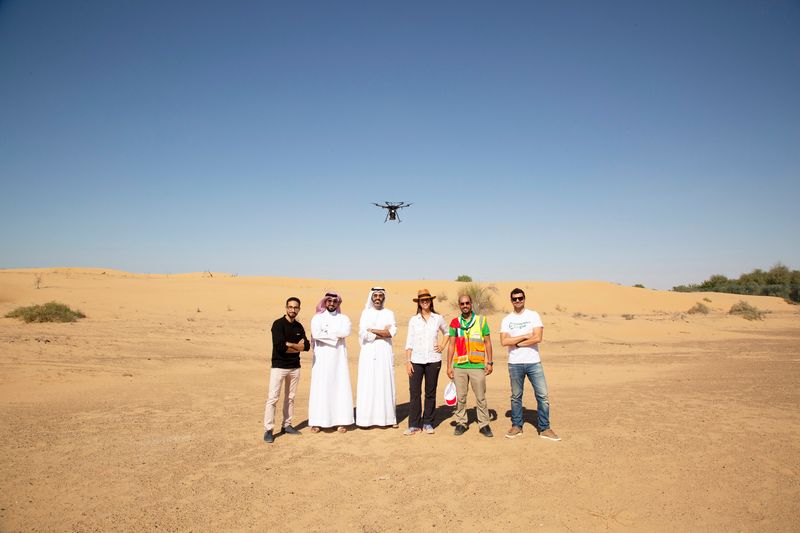 Team Cafu on their recent mission to plant 4,000 Ghaf seeds by drone in Sharjah in December
Image Credit: Supplied

Cafu now plans to commercialise this technology and has announced the creation of a research and development centre at Sharjah Research, Technology and Innovation Park.

Al Ghurair even said they would even be willing to outsource it to areas that have been ravaged by recent wildfires in the Amazon and Australia for free.

“If someone reaches out to us from Australia to see how we can help there we would definitely be willing should this project prove successful.”

All of this also fits as an ideal corporate social responsibility initiative for a fuel company to help offset their carbon footprint, but Al Ghurair insists that all came as an afterthought.

“Only after the experiment did I think it would be a good idea to reduce our own carbon footprint. We are now doing studies internally and have found out that by using AI to route our trucks we are much more efficient than a gas station. This research has been done by a third party and hopefully once done we can share it with the public.”

Why the Ghaf tree is symbolic to the UAE

Declared the national tree of the UAE in 2008, the Ghaf tree was also used as the official emblem for the Year of Tolerance last year because historically these trees provided shelter for different tribal communities to gather under together to shelter from the heat of the sun. As well as shade they also provided food and sustained a community. It’s bark could be ground to make flour, its wood provided fuel and its resin was used for dyes and medicines healing rheumatism and scorpion or snake bites. The Ghaf requires very little water to survive and its root system delves to beyond 30 metres, binding the soil together and literally keeping desert ecosystems in tact. Only one seed in 5,000 actually take route however as insects eat them.

The post Emirati on a drone mission to plant a million Ghaf trees appeared first on The Wealth Land.