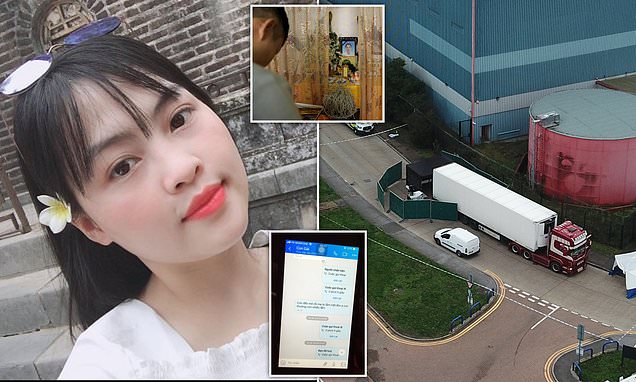 A Vietnamese woman who sent her mother harrowing messages telling her she ‘couldn’t breathe’ has been confirmed as one of the 39 migrants found dead in a refrigerated trailer in Essex.

Pham Thi Tra My, 26, sent her mother a series of texts telling her she ‘loved her’ and was ‘dying because she couldn’t breathe’ ahead of the discovery of eight women and 31 men on October 23.

More than a week after the migrants were found in Grays, Essex, the victim’s father, Pham Van Thin, has confirmed his daughter was confirmed to be among the dead in a phone call from England.

He toldTuio Tre: ‘The news that my daughter died in England is true. It is very painful ‘.

Pham Thi Tra My’s parents said they will bury their daughter in their home in the Can Loc district, Ha Tinh province, once her body is returned to Vietnam.

The 26 – year-old sent frantic sent messages to her mother while she was inside the refrigerated trailer, which had reached England through Belgium.

Her family claim she had paid people smugglers £ 30, 000 to travel to the UK via China ‘in search of a better life.’

A portrait of Pham Thi Tra My on a prayer altar inside her home in Can Loc district, Ha Tinh province, Vietnam

Pham Thi Tra May’s parents said they plan to bury their daughter (left and right) in their home in the Can Loc district, Ha Tinh province

The family of Nguyen Dinh Luong, 20, also confirmed on Saturday that their son was among the dead. His father, Nguyen Dinh Gia, said: ‘I do not believe that it is true.’

His mother added: ‘For more than a week, I have only prayed for my child to be safe . Now I have no hope. Why did my child die so young? ‘

Vietnamese authorities had sent British detectives the names of 14 people they believed had died in the container to begin the process of formally identifying the victims.

Both Pham Thi Tra My and Nguyen Dinh Luong were among those feared dead, and were confirmed as victims of the horror in phone calls from a translator working for the British authorities on Friday, theMirrorreported.

Pictured: Nguyen Thi Phong, mother of Pham Thi Tra My, who was confirmed to be among the 39 migrants found dead in Grays, Essex

The family of Nguyen Dinh Luong, 20, also confirmed he was among the dead on Saturday

It is still unknown how the victims entered the trailer before it traveled from Zeebrugge, Belgium to Purfleet.

Members of the Vietnamese community gathered in London for a vigil in memory of the 39 people found in a lorry in Essex on Saturday.

The vigil was attended by more than one hundred people at the Church of the Holy Name and Our Lady of the Sacred Heart in east London.

Candles spelling out ’39 ‘were at the foot of the altar ahead of the service in the Catholic church, which has a large Vietnamese congregation.

Reverend Simon Nguyen said:’ Today we gather to remember the people who have departed. These people who used to live among us, who dined with us.

‘Today they are no longer with us.’

On Friday, Essex Police confirmed it believes all 39 migrants found dead on October 23 are Vietnamese, after initially reporting they were Chinese nationals.

Assistant chief constable Tim Smith said: ‘At this time, we believe the victims are Vietnamese nationals, and we are in contact with the Vietnamese Government. ‘

‘We are in direct contact with a number of families in Vietnam and the UK, and we believe we have identified families for some of the victims whose journey ended in tragedy on our shores’, he said .

‘The confirmatory evidence needed to formally present cases to HM Senior Coroner for her consideration has not yet been obtained.

‘This evidence is being gathered across a number of jurisdictions worldwide. As a result, we cannot at this time announce the identity of any of the victims. ‘

The Vietnamese Embassy in London sent its’ heartfelt condolences’ to the families of the victims, who were initially believed to be Chinese nationals.

‘The embassy was deeply saddened at the initial findings by the Essex Police that among the victims who lost their lives in the lorry on rd October 2019 in Essex, UK, may be Vietnamese nationals, ‘it said in a statement.

‘ Specific identities of the victims still need to be identified and confirmed by the relevant authorities of Vietnam and UK.

‘We would like to convey our heartfelt condolences to the families of the victims.

‘The Embassy of Vietnam in London will closely co-ordinate with the relevant authorities of Vietnam and UK to support the families of the Vietnamese victims, if any, to bring their loved ones home.’

Eight women and 31 men were found dead in a refrigerated trailer (pictured) in Grays, Essex on October 23

Who has been arrested or charged so far?

These are the people who have been arrested, charged or bailed by police.

Arrested on suspicion of murder, the 25 – year-old was charged with 39 counts of manslaughter, people trafficking and money laundering. He appeared in court in Chelmsford and will appear again at the Old Bailey this month.

Eamon Harrison, 20, from Northern Ireland: Arrested after getting off a ferry on Saturday afternoon.A blue Scania truck that he was driving has been impounded by the police. He was charged with manslaughter and trafficking offences

Joanna Maher, 38, and her husband Thomas, also 38:The Warrington couple who previously told MailOnline they had sold the container are understood to have been held on suspicion of conspiracy to traffic people and on suspicion of 39 counts of manslaughter. They have been bailed until next month.

Man, 48, from Northern Ireland:The latest arrest took place at Stansted Airport. The identity of the man has not yet been revealed, but police said he has been arrested on suspicion of conspiracy to traffic people and suspicion of manslaughter.

British police on Friday asked two other suspects, brothers Ronan and Christopher Hughes, to turn themselves in.

Police say they have already spoke to Ronan Hughes by telephone but want to talk to the two in person. They are also wanted for manslaughter and trafficking charges.

The update from Essex Police regarding the victims’ nationalities comes after the force started extradition proceedings to bring 22 – year-old Eamonn Harrison from Ireland to the UK.

Harrison, of Newry in County Down, Northern Ireland, appeared in Dublin High Court on Friday charged with 39 counts of manslaughter, along with human trafficking and immigration offences, and was remanded in custody.

Detectives have also urged Ronan Hughes, 40, and his brother Christopher, 34, said to have links with the road haulage and shipping industries, to hand themselves in.

The pair, from Armagh in Northern Ireland, are wanted on suspicion of manslaughter and human trafficking.

It is understood Ronan Hughes spoke to police shortly after the driver of the lorry, Mo Robinson, 25, was arrested following the discovery.

Three other people arrested in connection with the incident – two men aged 38 and 46 and a 38 – year-old woman – have been released on bail.

In Vietnam, local media reported that police in the Ha Tinh province had arrested two people in connection with the deaths after launching an investigation into suspected human trafficking of workers.

The investigation was prompted when 10 families from Nghen Town, Thien Loc, Vinh Loc and Thanh Loc contacted authorities to say they had lost contact with their relatives. 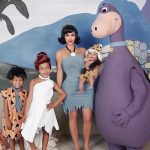