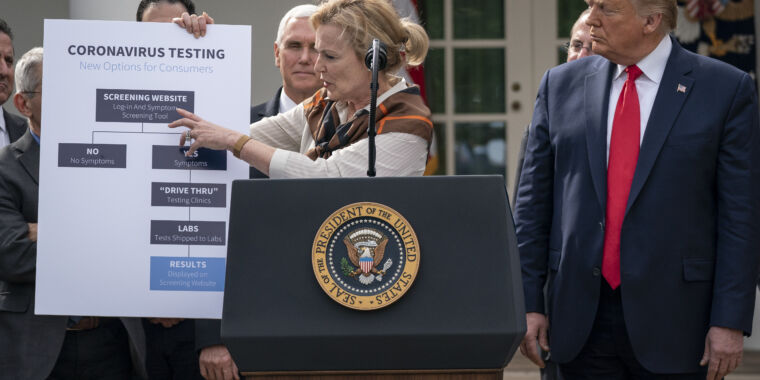 The portal, developed by a different Alphabet company, is not ready for national use.

/ Deborah Birx points to a block labeled “Screening Website,” showing its centrality to the plan for coronavirus testing. It later emerged that the website isn’t even ready for local testing.

During today’s press conference in which he declared the new coronavirus to be a national emergency , President Trump announced that Google was developing software that would be central to the US ‘containment strategy. Trump, along with Dr. Deborah Birx, a key official in the administration’s Coronavirus Response Coordinator, said that Google’s Web portal would be central to the process of helping US residents take advantage of a promised expansion of the country testing capacity.

Two hours later, however, Google communications felt compelled to issue a statement saying that nearly everything about this is either not quite right or badly mistaken. The portal is being done by a different company, and is not even ready for testing in the single location it’s planned for: California’s Bay Area.

Google’s role in the process was mentioned twice, first by Trump himself, who said, “Google is helping to develop a website. It’s going to be very quickly done — unlike websites of the past — to determine whether a test is warranted, and to facilitate testing at a nearby convenient location. ” He went on to claim that Google currently had 1, 700 engineers working on the project right now.

But it wasn’t simply Trump who failed to have a grip on the facts. Dr. Birx was brought on to elaborate on the government planned response, and said that Google would have a central role in it. “We wanted to also announce this new approach to testing,” she said, “which will start in this screening website facilitated by Google.” The website would supposedly ask users about risk factors and symptoms, determine if a test is warranted, and then direct them to a nearby drive-through testing center.

Problems start with the fact that Google isn’t involved in this. Instead, a different Alphabet company, Verily, is working on a portal. This makes more sense, given that Verily is focused on medical-oriented computing, both in terms of analyzing data for large healthcare providers, and in terms of providing services and hardware for individual patients. And it at least has the same corporate parent as Google, which presumably explains the confusion about who’s building the software.

But the Verily statement (which was issued by Google communications) indicates that there are a number of other issues in the plans presented by the administration today. The statement reads in full:

We are developing a tool to help triage individuals for Covid – 700 testing. Verily is in the early stages of development, and planning to roll testing out in the Bay Area, with the hope of expanding more broadly over time. We appreciate the support of government officials and industry partners and thank the Google engineers who have volunteered to be part of this effort.

So, while there may be some Google engineers volunteering to help out with the project, it’s being developed by a company that, as of two years ago, had a total head count that was less than a third of the 1, 728 engineers claimed by Trump. The website is not even ready for use for a single region in one state, much less ready to become a central part of the government strategy of allocating the millions of tests it announced would be available in the near future.

As of this report, the administration had not not clarified what its actual plan is. Given that key figures in devising said plan were acting as if this portal were ready for use just a few hours ago, it may take them some time to develop one. 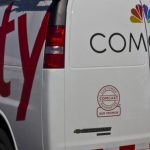