House Democrats are encountering renewed stonewalling from the White House as they attempt to move deeper into the ranks of officials with knowledge of Trump’s efforts to press Ukraine to investigate former vice president Joe Biden and his son Hunter Biden at a time when US military aid was being withheld from that country.

Trump, meanwhile, plans to welcome the Washington Nationals to the White House on Monday before heading to Kentucky for a campaign rally.

The decision is the second time in recent weeks that a federal appeals court has ruled against the president in hi s bid to stop investigators from scrutinizing his private financial records. The case is one of several legal clashes testing the limits of presidential power that is expected to reach the Supreme Court as soon as this term.

The Manhattan district attorney is investigating hush-money payments made in the lead-up to the 2016 presidential election. The ruling does not mean that Trump’s tax records will be turned over immediately. Local prosecutors agreed to delay enforcement of the subpoena to Trump’s longtime accounting firm if the president’s lawyers move quickly to ask the Supreme Court to intervene.

House Intelligence Committee Chairman Adam B. Schiff (D-Calif.) appeared briefly outside the secure area where depositions are being taken and declined to take questions from the media, saying he would have a comment later Monday morning.

With the House in recess and witnesses not showing up, the usual flurry of activity in that part of the Capitol was largely halted. Schiff was the only lawmaker to enter or exit the secure area in view of the dozens of journalists and photographers on the scene over the past hour.

“All-Time High for Stock Market and all the Fake News wants to talk about is the Impeachment Hoax!” Hetweeted.

Fiona Hill, the White House’s former top Russia adviser, has arrived at the secure area of ​​the Capitol where witnesses are being deposed.

It is common for witnesses who have previously testified to return to review a transcript of their testimony.

Hilltold impeachment investigatorslast month that Rudolph W. Giuliani, the president’s personal lawyer, ran a shadow foreign policy in Ukraine that circumvented US officials and career diplomats to personally benefit Trump, according to people familiar with her testimony.

10 am: No witnesses have appeared to testify

Two White House officials who were scheduled to testify Monday morning – Eisenberg and Robert Blair, a senior adviser to acting White House chief of staff Mick Mulvaney – have not appeared.

Two other officials scheduled to appear Monday afternoon – Brian McCormack, an Office of Management and Budget official, and Michael Ellis, another White House lawyer – are not expected to appear either, according to two people involved in the congressional inquiry. They requested anonymity to discuss closed-door proceedings.

Trump returned to Twitter to send a three-wordtweet: “Read the Transcript!”

He has previously argued thatthe rough transcriptof his July call with Zelensky clears him of any wrongdoing because he does not explicitly condition the resumption of US military aid on Ukraine conducting investigations that could benefit him politically.

Democrats consider the transcript highly damaging to Trump but have been gathering supporting evidence through depositions.

9: 30 am: Eisenberg attorney cites timing, Trump directive as reasons for not testifying

An attorney for Eisenberg said in a letter to House committee chairmen that Eisenberg is not appearing Monday because he was not given reasonable time to prepare and because Trump instructed him not to cooperate.

The attorney, William A. Burck, said a subpoena was emailed to Eisenberg on Friday night.

“This is insufficient and unreasonable notice and imposes an undue burden on Mr. Eisenberg, especially in light of his legal and national security responsibilities in the White House, ”Burck wrote. “Even if Mr. Eisenberg had been afforded a reasonable amount of time to prepare, the President has instructed Mr. Eisenberg not to appear at the deposition. ”

Burck also referenced a pending court case regarding testimony from another witness who declined to appear, citing conflicting guidance from Congress and the White House.

“Mr. Eisenberg, as a lawyer and officer of the court, will abide by whatever final decision the federal judiciary reaches on the dispute between the Executive and Congress, ”Burck wrote.

A White House lawyer central to the Ukraine controversy plans to defy a subpoena from House investigators at Trump’s direction, according to people familiar with his plans.

House Democrats wanted to question Eisenberg, the deputy counsel on the National Security Council, about what transpired after Trump’s July 25 call with Zelensky, which set off internal debate over Trump’s actions.

The people familiar with Eisenberg’s plans spoke on the condition of anonymity to discuss internal matters.

Eisenberg proposed moving a transcript of the call to a highly classified server and restricting access to it, according to two people familiar with Lt. Col. Alexander Vindman’s testimony who spoke on the condition of anonymity to describe private discussions.

Three other witnesses summoned for scheduled depositions Monday are also unlikely to appear.

“Democrats voted for an impeachment inquiry that they claimed would provide transparency and due process,” McCarthyTweeted. “They are right back at it – behind closed doors in the basement of the Capitol – with four more scheduled depositions hidden from the public.”

Democratic leaders have signaled that open hearings could begin as early as next week.

Amid a flurry of tweets about the impeachment inquiry, Trumpassertedthat his job approval among Republicans stands at 95 percent – a figure significantly higher than in recent public polling.

Neither the White House nor the Trump campaign immediately responded to questions about what poll he was citing.

In another of his Monday morning tweets, Trump quoted Fox News commentator Dan Bongino calling the impeachment inquiry a “farce” and adding that “no Republican should forget that.”

7: 50 am: Trump says written answers from whistleblower ‘not acceptable’

Trump renewed his call Monday for the whistleblower whose complaint sparked the impeachment inquiry to testify publicly and brushed aside an offer by his attorneys to answer written questions under oath directly from Republicans on the House Intelligence Committee.

“He must be brought forward to testify. Written answers not acceptable! ”Trumptweetedregarding the anonymous U.S.

During the investigation of special counsel Robert S. Mueller III into Russian election interference, Trumpdeclined to be interviewedand submitted answers to questions in writing.

The whistleblower’s attorneys previously notified both the House and Senate intelligence committees that their client was willing to respond to questions in writing and under oath “in a bipartisan manner.”

By offering a direct channel to Republicans, the whistleblower’s team had sought to quell grumbling by GOP leadership – and Trump – that the impeachment process has been secretive and unfair.

7: 15 am: Trump says there is’ no reason ‘to summon witnesses regarding his call

Trump said Monday that there is “no reason” for House investigators to summon witnesses to testify about his July 25 call with Zelensky.

“What I said on the phone call with the Ukrainian President is ‘perfectly’ stated, ”Trump said in a morningtweet. “There is no reason to call witnesses to analyze my words and meaning. This is just another Democrat Hoax that I have had to live with from the day I got elected (and before!). Disgraceful! ”

Earlier, he referred to Sunday night’s airing of“ The Mark Levin Show ”on Fox News.

“Mark Levin, a great lawyer and scholar, said last night on his @marklevinshow, that all you have to do is read the transcript of the call, you do not need Never Trumpers or other witnesses to say what it means or says, ”Trumptweeted. “It is plainly and very well stated for all to see. Witch Hunt ”

Trump, without evidence, has branded several of the witnesses who have testified as“ Never Trumpers, ”a term used to describe Republicans who were opposed to his presidency from the start. In a tweet last month, he described them as “human scum.”

7 am: Four White House witnesses unlikely to appear for depositions

It appears unlikely that any of the four White House officials summoned by House investigators will show up Monday for planned closed-door depositions on Capitol Hill.

Democrats are seeking testimony from:

● Robert Blair, assistant to the president and senior adviser to acting chief of staff Mick Mulvaney. He listened in on the call between Trump and Zelensky.

● Brian McCormack, associate director for natural resources at the Office of Management and Budget. Until recently, McCormack served as chief of staff to Energy Secretary Rick Perry, who has said he had urged Trump to talk to Zelensky about energy issues.

● Michael Ellis, another White House lawyer who advises the NSC.

6: 30 am: Trump heading to Kentucky for campaign rally

As House investigators resume their work on Monday, Trump is scheduled to welcome the Washington Nationals to the White House to honor them for their World Series win before heading out of town to stage another “Keep America Great Rally,” this one in Lexington, Ky.

Trump campaign rallies have become a venue for the president to air grievances about the impeachment inquiry.

He istraveling to Kentuckyin the hope of giving that state’s Republican governor Matt Bevin a boost hours before the polls open for the gubernatorial election. Bevin is in a tight race with Democrat Andy Beshear, the state’s attorney general and son of a former governor. Trump carried the state by 30 percentage points over Democrat Hillary Clinton in 2016.

In a series of late-night tweets and Retweeted that extended into early Monday morning, Trump shared assessments of the impeachment inquiry by several conservative pundits, including Fox News’s Jeanine Pirro.

“The Democrats are tearing this country apart,” Pirro, the host of “Justice with Judge Jeanine,” said in atweetretaining by Trump. “They are wusses, wimps and weasels. They don’t have the chutzpah to face Donald Trump in November, I don’t blame them. Because he’ll blow those wusses, wimps and weasels right out of the swampy water they call home. ” 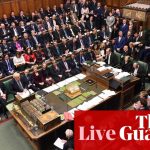